After 11 years, NASA’s asteroid-hopping spacecraft is running out of fuel

Here are some highlights from its journey 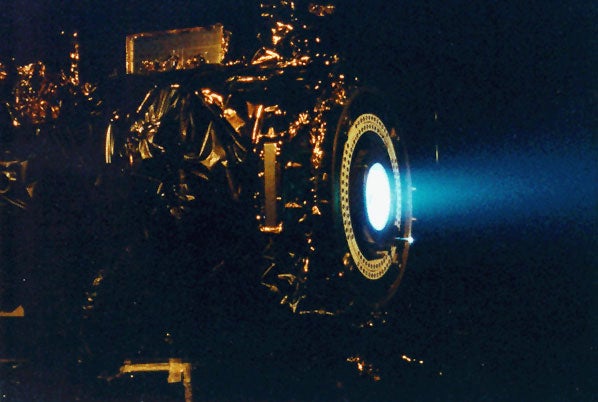 Running low on fuel, NASA’s Dawn mission is about to come to an end after 11 successful years in space. Dawn’s mission was a unique one in NASA’s roster of explorers. While slightly lesser-known than the Curiosity rover on Mars or spacecraft like New Horizons, which flew past Pluto some say Dawn was the first truly interplanetary mission because it orbited two planetary bodies during its journey—the asteroid Vesta and the dwarf planet, Ceres. It’s unusual in other ways too—unlike most other NASA missions, Dawn is not an acronym. Instead, it’s named after the missions goal—to look back into the dawn of the solar system.

To do this, the spacecraft orbited both Vesta and Ceres, two bodies that are wildly different from each other, but both may hold answers to questions about the earliest days of the solar system. Vesta is the second largest object in the main asteroid belt, and a majority of meteorites that have been found on Earth are believed to come from Vesta. Ceres on the other hand is unique in that it’s the largest body in the asteroid belt, after all it’s large enough to be classified as a dwarf planet. It’s believed that Ceres formed much further out in the solar system and spent millions of years migrating inwards, making it a perfect combination of outer solar system meets inner solar system.

Bodies like this haven’t been altered by weather or geological processes the way Earth has, with it’s windstorms and volcanoes. In some ways, Vesta and Ceres are time capsules of the earliest days of the solar system, so any chance to study them can teach us a lot about what sort of materials were around billions of years ago as well as the types of processes that eventually gave us the solar system we know today. Dawns Principal Investigator, Dr. Carol Raymond, says that Vesta and Ceres “represent two different chapters in the solar system’s history. Vesta is a good example of the inner solar system—it’s a dry rocky body whereas Ceres formed with much more water.”

Overall this mission with a relatively modest 500 million dollar budget, has delivered well beyond its expectations. Every part of the spacecraft is still working perfectly, but the hydrazine fuel that is used to keep the spacecraft oriented towards Earth is running dangerously low. If Dawn can no longer point its antenna towards us, then NASA engineers can no longer communicate with it, making any further observations useless.

NASA thinks that the mission will end sometime between mid September to mid October. Once they can no longer connect with the spacecraft, we will know the mission has ended. The spacecraft will remain in orbit around Ceres for 20 years or longer, but eventually it will impact Ceres. Because the planet turned out to have so much water and icy and might still be geologically active, planetary protection required that the spacecraft not impact the surface for fear of contaminating future research. Planetary protection guidelines say that they need to keep the spacecraft away from the planetary body for at least 20 years in order to give NASA time to launch a new mission. There is a chance we might go back to Ceres with new astrobiological glasses on to see if life exists there, or if it once did. And while every mission’s end is bittersweet, Dawn’s team are reflective and thankful for all that Dawn delivered. “It’s been a long and awesome journey,” says Raymond. Dawn’s mission director Marc Rayman agrees; “I’m both sad that its ending and I couldn’t be more thrilled with how successful it’s been.”

Let’s take a look at a few highlights from the Dawn mission:

The Dawn spacecraft is often referred to as a tie-fighter; think Star Wars meets actual space exploration. The Dawn spacecraft’s main propellant is made from an element called xenon and is used in an ion engine to accelerate through space. Ion propulsion is ten times more efficient than other types of propulsion used on Earth, even if it takes a while to get up to speed. While it takes Dawn four days to accelerate from 0-60 miles per hour, after 11 years of travel it’s managed to reach speeds of up to 25,000 miles per hour. The force of these charged particles of xenon getting pushed out of the engine is so weak that it pushes the spacecraft with about the same amount of force as a piece of paper resting on your hand. But that’s all you really need in space where gravity is non-existent. Keep that engine running longterm and it is one of the most efficient ways to navigate around space. Dawn proved how successful this type of propulsion can be and the blue glow of xenon is probably likely to appear in future missions as a result.

This is Vesta, nearly 300 miles across and made up of the primordial building blocks of our solar system. Until Dawn approached this large asteroid, it was just a blurry rocky body imaged by the Hubble Space Telescope. Throughout its time in orbit around Vesta, Dawn discovered that this asteroid actually resembled more of a baby planet, giving scientists hints about what proto-planets really look like. “Vesta is a time capsule of the very early days of solar system formation, “ says Raymond. After gathering data directly from orbit, the team can now trace the evolution of Vesta through modeling and what they found is Vesta likely formed within 1.5 million years of our solar system. That means that the first pebbles that existed around our star helped make the asteroid. As far as space rocks go, they don’t really get much older than Vesta.

After some initial exploration, Dawn spotted some strange features on the surface that were unexpected. “One of the things that really surprised us,” says Raymond, “was there was a patch of hydrated dark material on Vesta. “It was thought that Vesta was drier than the moon because of its gravity. The moon can hold onto more ice because of that, but what we found was this patch of hydrated material at the equator that was enriched in hydrogen.”

The team discovered that while it wasn’t exactly damp within that dark patch on Vesta, the actual minerals themselves were hydrated which they did not expect to find. Also called hydroxyl, hydrated minerals contain water within their crystalline structure. Hydrated minerals have also been found on Mars. While it’s not water, it’s evidence of a water-related history. “It’s not free water or ice but this was a big surprise and a big discovery.” says Raymond.

Ceres was once classified as an asteroid, but now joins in the ranks along the larger of the smaller bodies in our solar system next to Pluto, Eris, and other dwarf planets. Ceres is around 600 miles across (that’s a little less than the distance between New York City and Detroit.) While that might seem pretty small, compared to other planets, for something residing in the asteroid belt it’s enormous. After departing Vesta, Dawn entered orbit around Ceres and captured this image of the icy world. The team wasn’t sure what Ceres’s story would turn out to be, but it ended up being a lot more fascinating and complex than they anticipated. After some initial reconnaissance they found that Ceres likely once had a subsurface ocean and might even still be geologically active. Weird bright spots began to appear scattered in size around the planet and after closer examination were found to be hydrated salts.

When Dawn first spotted these bright spots on Ceres, scientists wondered what could be causing such a difference in contrast from the surface. With closer study, they realized these were salty ice mounds getting pushed upwards, towards the surface of the dwarf planet. We know that Ceres likely formed in the outer solar system, where it was cool enough for water to freeze, instead of burning away in the hot sun. Over many millions of years Ceres migrated inward, but like many outer solar system bodies it has retained a lot of its water.

Ceres has one enormous 13,000-foot-tall mountain and it is called Ahuna Mons. This striking landmark is evidence that the dwarf planet was recently geologically active—and it might still be. The white streaks along the sides are sodium carbonate. This material is not common in the solar system. It’s found here on Earth, in the plumes of Enceladus and on Ceres. What could those three have in common? We know life exists here, and researchers think there’s a chance it might exist on Enceladus. Could it exist on Ceres? There is only one way to find out. With Dawn about to run out of gas, another future mission will have to continue its mission of exploration.