Meet STEVE, and 7 other mysterious glowing things you’ll find in the night sky

From northern lights to lightning bolts 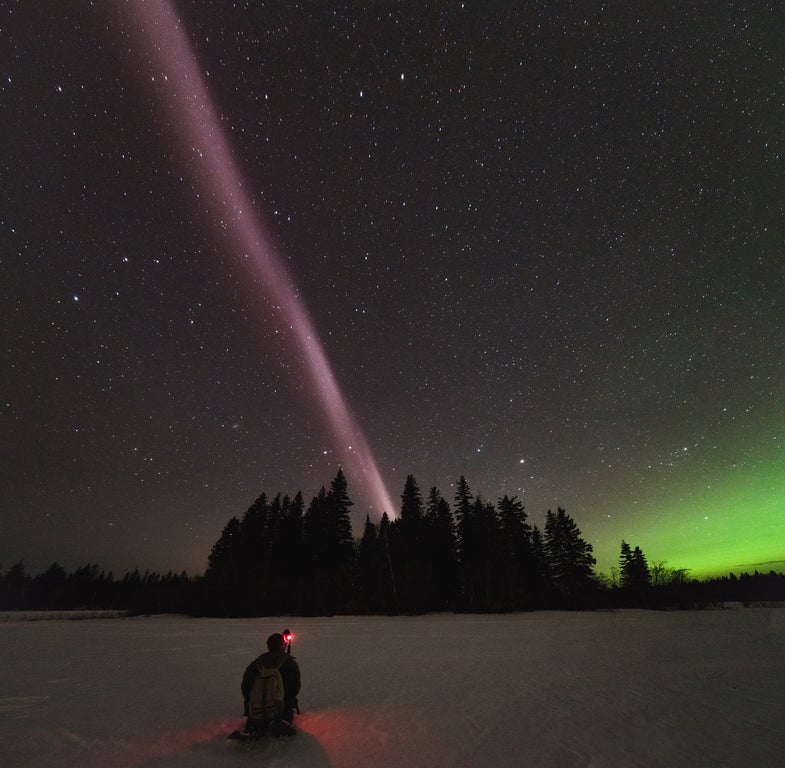 If you looked up on the night of March 28, 2008 in Eastern Canada, you might have seen a bright, white-purple ribbon weaving up into the sky, unlike anything you had ever seen before. Could it be lighting? Fireworks? Maybe a spaceship finally bringing the first wave of envoys from the nearest habitable planet?

STEVE isn’t your friendly neighborhood alien—it’s an acronym: Strong Thermal Emission Velocity Enhancement. In simpler terms, it’s hot. Really hot. The purple arc is actually a collection of electrons flying westward through the atmosphere as they reach temperatures of more than 5600 degrees Celsius (more than 10,100 degrees Fahrenheit). That’s hotter than the surface of Sun, making it the hottest place near Earth on the rare occasions when it’s active, said Bea Gallardo-Lacourt, a postdoctoral associate at the University of Calgary and first author on a recent paper in Geophysical Research Letters about STEVE.

Gallardo-Lacourt has been studying STEVE ever since it was first brought to astrophysicists’ attention by stargazers. (That’s where the phenomenon got its unconventional name: Amateur astronomers dubbed it “Steve” based on a scene from the movie Over The Hedge.)

STEVEs are still relatively shy—there have only been 30 events captured on camera in the last decade, which is rare, Gallardo-Lacourt said. But even though they bear a distinct resemblance to other, more famous lights in the sky, don’t mix them up with auroras. Although both phenomena paint the sky in bright, colorful illuminated bands, last week’s study by Gallardo-Lacourt and colleagues at the University of Calgary and the University of California Los Angeles suggested that they’re not the same thing.

Auroras are found at higher latitudes: Two of the best known are the Northern and Southern lights, which can be spotted at high latitudes in the northern and southern hemispheres, respectively. They form when the solar winds that batter the magnetosphere — the magnetic field surrounding the Earth — shake loose electrons and protons that drop into the upper layer of the atmosphere, the ionosphere. Scientists still don’t know how that happens, but as these tiny particles hit other molecules in the atmosphere, like oxygen, the collisions release energy in the form of colored light.

STEVE, on the other hand, makes an appearance at lower latitudes—closer to the equator than auroras—and in Gallardo-Lacourt’s study, she found that there are no particles released in the process. She focused on the 2008 STEVE event that crossed paths with a National Oceanic and Atmospheric Administration’s satellite. Polar Orbiting Environmental Satellite-17 is able to measure particles falling through the atmosphere. But when STEVE arrived, it didn’t see anything.

So scientists still have no idea what causes STEVE. Gallardo-Lacourt thinks something might be heating a small part of the ionosphere to extreme temperatures and accelerating particles across the night sky. But that doesn’t explain why STEVE occurs in specific parts of the sky at specific time, or what gives it its bright white-purple color. The color of the light depends on what types of particles are releasing energy. For example, the greenish-tint of the Northern lights is because of the high oxygen levels high up in the atmosphere where auroras form. STEVE’s white light is a combination of all the colors, which means a lot of different molecules are involved—but in the ionosphere, 100 miles above the Earth’s surface, there isn’t that much diversity.

Even if STEVE is leaving us in the dark, it isn’t the only thing lighting up the night sky, and they’re not all auroras, either. Here are a few other awe-inspiring natural light shows to look for the next time you go stargazing.

They may not have pointy ears, but their eerie green halos are fantastical enough. WIth an appearance that could easily be mistaken for a UFO, ELVES — or Emissions of Light and Very Low Frequency Perturbations due to Electromagnetic Pulse Sources — form an expanding, glowing disc of light above thunderstorms. They last roughly one millisecond, as the electricity from the storm energizes nitrogen molecules in the atmosphere at heights comparable to auroras. So, although they can cover hundreds of square miles, just like their mystical counterparts they’re too fleeting to be spotted by humans.

Sprites join their fellow magical woodland creatures in the upper atmosphere. When lightning strikes the ground, it creates an electric field miles above the thundercloud that is strong enough to turn inert air into a conductor, like a fluorescent light bulb. This can trigger brief, nearly instantaneous, tendril-shaped streaks of light. “Each sprite event has a parent lightning,” said Burcu Kosar, research associate at NASA Goddard Space Flight Center. These finger-like projections can snake down tens of miles, and with clear skies and a good camera, you can catch them on film. Despite their red-hot appearance (due to energized nitrogen molecules), sprites are actually made of cold plasma.

Blue jets are yet another atmospheric product of thunderstorms. Along with red sprites, they are thought to come from lightning that sends an electric charge above the clouds, instead of down to the ground. But even though they are closer to Earth than other electric events in the sky, these blue funnels of energy are rarely spotted and poorly understood.

Even on the darkest night, there’s still a slight shimmer of light in the sky. That’s airglow. It forms at the outer reaches of Earth’s atmosphere, where it is getting battered by cosmic and solar particles. As a result, molecules in the upper atmosphere are constantly reacting with each other or with the Sun’s rays, emitting small amounts of energy in the form of light. Although it isn’t always evident from our point of view, in photos taken from space you can clearly see layers of green and red light wrapping the Earth in a cozy, glowing cocoon.

Lighting is so common that it has become a part of our culture: For the ancient Greeks, it was Zeus’s work, and today, it’s lends its supernatural legacy to suspenseful scenes in movies. Even though we know it has natural causes, it’s pretty awe-inspiring. After all, it’s an electric current shooting out of the sky with up to a billion volts. During a storm, water and ice particles within a storm cloud collide with each other, creating a gradient of charges. The top of the cloud becomes positively charged and the bottom is negative, like a fluffy battery in the sky. As the difference in charges grow, they need to be balanced out, and lighting is the perfect bridge. Sometimes, the current just flows between the positive and negative regions within the cloud, creating a flash in the sky— but Earth is also a pretty good positively-charged target, which is why it often gets zapped.