Tornadoes are a little different when they happen on the sun

Also in space: A neighborhood of black holes, a new (and old) reason to study Venus' clouds, and the end of the Lunar XPrize. 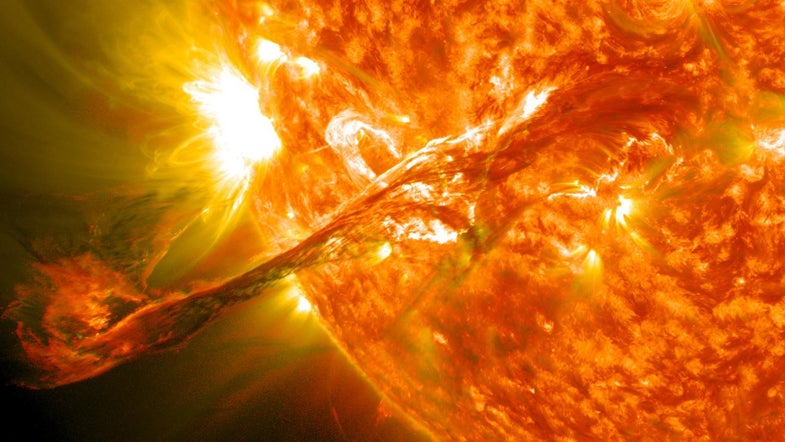 In pictures, solar tornadoes look like our own planet’s massive whirling twisters (hence the name). That’s except for the fact that they are many times the size of our planet and they contain super-hot plasma instead of wind and rain. But similar to the ones on Earth, they spring up from the Sun’s surface, and then quickly die down again.

The resemblance, scientists have found, stops there. In research discussed at the European Week of Astronomy and Space Science (EWASS) this week, astronomers took a closer look at data collected during these events and found that the ‘tornadoes’ weren’t massive, spinning, vertical funnels after all. Instead, the plasma followed horizontal magnetic lines coming out of the sun. The structures seem to be anchored somewhere on the surface (though scientists don’t yet know by what), and they stay fairly stationary during their brief existence.

“”Perhaps for once the reality is less complicated than what we see,” Brigitte Schmieder, a collaborator on the project said in a statement. “Solar tornadoes sound scary but in fact they normally have no noticeable consequences for us. However, when a tornado prominence erupts, it can cause what’s known as space weather, potentially damaging power, satellite and communication networks on Earth.”

This was a busy week for space news. Don’t worry, we’ve got you covered. Keep reading.

Could there be life in the dense clouds of Venus? That question has been nagging astrobiologists since 1967 when Carl Sagan and Harold Morowitz speculated that the chemical and physical ingredients to make life possible were hanging out in Venus’ clouds. Now, that’s resurfaced in a paper out this week in the journal Astrobiology.

In it, researchers bring up the idea again, with some new insights: Dark splotches that appear and disappear in the Martian atmosphere bear some striking resemblances to algae blooms here on Earth, including being made of the same sized particles and their ephemeral nature. And recent discoveries of extremophile microbes on this planet (creatures that thrive in extreme conditions) give astrobiologists hope that similarly harsh environs on Venus could yield extraterrestrial fruit. But to know more, researchers are going to have to take a closer look.

To do so, Aerospace company Northrop Grumman is developing VAMP, the Venus Atmospheric Maneuverable Platform, which researchers could use to explore the clouds of Venus, hunting for life. It’s still very much in its early stages, but is an intriguing possibility for researchers.

Researchers found a dozen black holes orbiting a supermassive black hole near the center of the galaxy, Sagittarius A*. That could indicate that there are tens of thousands more black holes in that immediate area, something that astrophysicists have long predicted, but haven’t found evidence for before now.

Black holes are hard to see because they’re ‘holes’ that even light can’t escape. Researchers can see them when gas from a nearby star gets sucked towards a black hole and releases x-rays, but depending on their size and location relative to Earth even those binaries can be difficult to see. But by focusing on the area near the center of the galaxy and looking for weaker x-ray emissions (caused by stars with low masses paired with black holes) they were able to identify 12.

Extrapolating from what they were able to observe and their existing knowledge of the center of our galaxy, the researchers estimate that there could be hundreds of star and black hole pairs like this and tens of thousands of isolated black holes hanging out in an area about 6 light years away in the center of the galaxy.

“Everything you’d ever want to learn about the way big black holes interact with little black holes, you can learn by studying this distribution,” astrophysicist and lead author of the study Chuck Hailey said. “The Milky Way is really the only galaxy we have where we can study how supermassive black holes interact with little ones because we simply can’t see their interactions in other galaxies. In a sense, this is the only laboratory we have to study this phenomenon.”

The Google Lunar XPrize is dead. Long live the Lunar X Prize. Google’s sponsorship of the prize ended without any of the five finalists claiming a portion of the $30 million in award money that was up for grabs. Now, XPrize hopes to give the teams another shot, and is looking for another sponsor to do so.