Voyager 2 is almost outside the sun’s protective bubble

It follows its predecessor toward where no other (active) spacecraft has gone before. 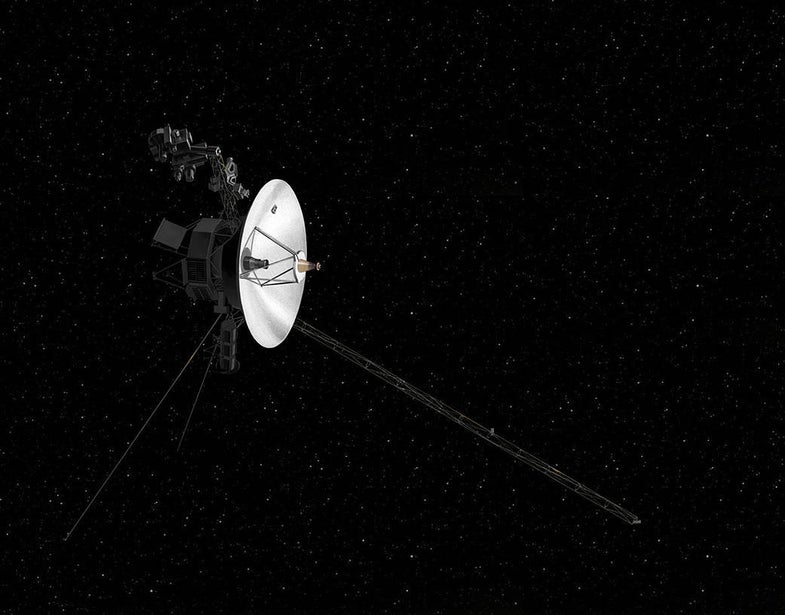 Space is vast, but it’s not entirely empty. Take a closer look, and you’ll find that even the gulfs between stars are threaded with speeding particles, survivors of ancient, cataclysmic events that launched them across the universe at nearly the speed of light.

The Voyager 2 spacecraft, which left Earth more than 40 years ago to survey the outer planets, just detected a 5 percent uptick in these cosmic refugees, NASA announced. The new measurements bring a long-expected sign that the probe is approaching the edge of the sun’s protective influence, which for many researchers defines the line between interplanetary and interstellar space. Crossing that boundary will provide a valuable second data point in the quest to determine its shape, but precisely when the probe will leave the solar system remains unknown.

“We’re seeing a change in the environment around Voyager 2, there’s no doubt about that,” said Voyager Project Scientist Ed Stone of Caltech in a press release. “We’re going to learn a lot in the coming months, but we still don’t know when we’ll reach the heliopause. We’re not there yet—that’s one thing I can say with confidence.”

If you feel like you’ve heard this story before, it’s because you have. The craft’s speedier sibling, Voyager 1, returned data showing a similar increase of interstellar cosmic rays in May of 2012. In addition to light, the sun also spits out a plasma of charged particles in all directions. Too hot to contain, this solar wind streams outward past the planets, pushing back on of the interstellar particles and creating a bubble researchers call the heliosphere. Three months later, on August 25th, Voyager’s aging instruments detected a drop in solar particles and a further rise in interstellar particles—strong evidence that it had left the heliosphere at last.

From a solar wind perspective, exiting the heliosphere means exiting the solar system. In the upcoming months to years, Voyager 2 should join Voyager 1, getting a taste of the particles and magnetic fields that exist in the relative stillness between stars. But the solar wind is not the sun’s only way of exerting its influence, and if you think about the solar system as the collection of rocks and gas balls that are gravitationally stuck circling the sun, then both Voyagers have a long way to go.

The easiest way to visualize such huge distances is by using Astronomical Units, or AU. One AU is the distance between the sun and the Earth. They’re not heading in the same direction, but Voyager 1 is currently about 143 AU away from the sun while Voyager 2 lags behind at 118 AU. Those distances put them way past Neptune at 30 AU, but there’s lots of stuff even further out. The orbit of the recently discovered ‘Goblin’, for instance, penetrates 2000 AU, and a collection of icy rocks known as the Oort cloud extends tens of thousands to even hundreds of thousands of AU beyond. NASA expects the Voyager probes will emerge from this region in something like 20,000 years.

Putting aside the high bar of escaping the sun’s gravitational companions, a functional Voyager 2 joining Voyager 1 in interstellar space will be a landmark achievement. Exchanging signals with such distant machines requires immense resources, and NASA devotes seven to ten hours per day of valuable listening time on its Deep Space Network to pick up the increasingly dim pings of data. The Pioneer 10 probe is also somewhere near the boundary, but it stopped phoning home in 2003. Altogether five spacecraft are traveling fast enough to escape the sun completely, but two are defunct and the third, New Horizons, is expected to power down before leaving the heliosphere in a few decades.

Voyager 2’s nuclear power source should hold out until 2025 or so—likely long enough to sample interstellar space—but precisely when that data will come in is anyone’s guess. While Voyager 1 crossed the boundary three months after registering an increase in cosmic rays, Voyager 2 is headed for a different part of the heliosphere, which itself can rapidly change shape.

“All these boundaries could be moving with solar activity, and we really don’t know where they are,” says Merav Opher, an astronomer who studies the shape of the heliosphere at Boston University. At more active points in the sun’s 11-year cycle, such as the one we’re in now, the sun blows the heliosphere up like a balloon, pushing the boundary out by a handful of AU over the course of a couple years. Later in the cycle, a less active sun lets it deflate.

The shape of the heliosphere may not be as uniform as its name implies either. “In general, nature doesn’t have very smooth boundaries. The question is how bumpy and at what scale,” Opher says. Her past simulations have suggested it may even be shaped more like the wake of a boat than a sphere.

Voyager 1’s close-up look at one point of that boundary brought a number of revelations. For one, the heliosphere is leakier than physicists had thought, equipped with a magnetic connection that allows an exchange of particles in some areas. Voyager 1 also revealed surprising features just past the edge. The probe has “surfed” a series of outwardly directed pulses triggered by sudden spurts of matter from the sun, and has detected an unexpectedly gentle pileup of interstellar material, suggesting that the solar system careens through the galaxy less wildly than astronomers had thought. Opher is even more excited for Voyager 2, since—unlike Voyager 1—it still has a working plasma instrument, and should be able to record first-of-a-kind data of both the boundary and the interstellar medium.

Even with their unprecedented detail, the two Voyager data points likely won’t be enough to nail down the shape of the sun’s protective bubble. Researchers will also need data from the current IBEX and upcoming IMAP missions to remotely survey the overall geometry of the heliosphere. Opher likens the project to solving a murder mystery with the help of multiple observers with different perspectives. “Somebody grabbed all the little tools in one room, and the other one took pictures far away from the house,” she says. “You have to reconstruct with both of them what the heliosphere is doing.”

Solving that local mystery could have universal ramifications. Astronomers can see that the “astrospheres” around other stars also make waves in the space around them, but their plasma remains too sparse to probe directly. Figuring out how the sun shapes our neighborhood and protects us from some cosmic rays will be an essential step toward understanding where, and if, the same process is happening elsewhere.

“If you want to study how life develops in other stellar systems, you need to understand how other astrospheres behave,” Opher says. “Let’s start in our own backyard.”