It's now one of two working spacecraft in interstellar space. 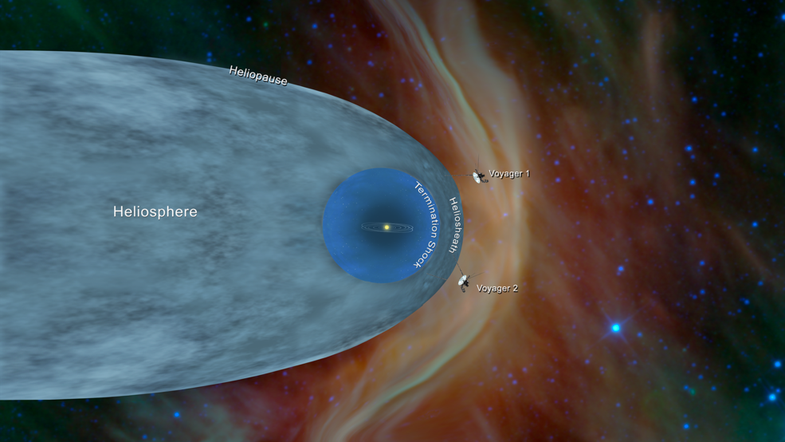 Voyager 2 has joined Voyager 1 beyond the influence of the solar wind. NASA/JPL-Caltech
SHARE

Voyager 2, the little spacecraft that could, continues to hurtle outward into the universe, moving around 10 miles away from the sun every second. Those miles have added up over the course of 41 years, taking it past Jupiter, Saturn, Uranus, and Neptune. On November 5 it finally joined its sibling Voyager 1 in the unexplored reaches of interstellar space.

“I think we’re all happy and relieved that the Voyager probes have both operated long enough to make it past this milestone,” said Suzanne Dodd, Voyager project manager at NASA’s Jet Propulsion Laboratory in a press release. “This is what we’ve all been waiting for.”

Voyager 2 is now more than 11 billion miles from the sun—about 122 times farther than Earth is from our star. Despite traveling at the speed of light, communications from the probe take more than 16 hours to reach the colossal antennas of the Deep Space Network, which listens for the faint pings from California, Spain, and Australia.

The announcement marks the second time in history a functioning spacecraft has left the heliosphere—the bubble inflated by the outflow of solar wind from the sun—after Voyager 1’s exit in 2012. The presence of solar wind defines the difference between interplanetary space, which is dominated by the sun’s influence, and the space between stars, which features a sparse mix of dust, gas, and cosmic rays. Pioneer 10, launched in 1972 to Jupiter has flown even farther than Voyager 2 and could conceivably have passed the boundary as well, but the spacecraft powered down in 2003 and can’t send back measurements.

The Voyager team has been watching the machine’s remaining instruments closely as they registered an uptick in cosmic rays in recent months. The charged heliosphere pushes out and repels most of the incoming particles, so more rays hinted that Voyager 2 was approaching the boundary. Conclusive proof of the November 5 crossing arrived in three forms: the uptick of cosmic rays became a spike, the number of solar wind particles from the sun plummeted, and the magnetic field jumped in intensity as the two winds clashed.

“There are two winds pushing on each other, said John Richardson, the principal investigator for the probe’s Plasma Science Instrument at the American Geophysical Union’s fall meeting in Washington today. “The solar wind pushing out and the interstellar wind pushing in.”

But entering interstellar space does not mean that the spacecraft has left the solar system, Voyager’s project scientist Ed Stone emphasized. The solar system is the collection of all the rocks and iceballs captured by the sun’s gravity, which includes many comets and frozen bodies in the cosmic region known as the Oort cloud. He expects the Voyager spacecraft will enter this area in about 300 years, and remain there for tens of thousands of years.

Researchers are especially excited about Voyager 2’s progress because it still has a device capable of measuring the plasma of its surroundings, while Voyager 1’s plasma instrument failed in 1980. Voyager 2 will use this tool to make the first direct measurements of the rarified plasma that surrounds our solar system—a substance that could tell us about the supernova blasts that seeded much of the material in our cosmic neighborhood.

In the meantime, both crafts are already teaching researchers about the protective bubble the sun blows around the planets. Measurements from Voyager 1’s exit showed that the boundary stops about 70 percent of potentially harmful cosmic rays from entering the inner solar system at all, much less reaching Earth. The heliosphere inflates as the sun gets more active, and probably doesn’t have a uniform shape, so getting two data points at different locations and times has provided crucial details to guide current and upcoming surveys that aim to map out the whole bubble with indirect observations. “One of the great things about Voyager is that it keeps surprising us,” Stone said. “That means there’s a lot to learn.”

And both machines should continue chugging along for at least a few more years. As they battle waning power and the freezing chill of deep space—Voyager 2 currently runs at about 37 degrees F, Dodd said at the AGU meeting, perilously close to its fuel’s freezing point—the team will face hard choices about which instruments to prioritize for the most valuable scientific data. Nevertheless, she’s optimistic they’ll fly for at least five more years, perhaps ten.

“Both spacecraft are very healthy if you consider them as senior citizens,” she said.

Correction 12/12: An earlier version of this story incorrectly converted the temperature at which the spacecraft is currently operating. It is 37 degrees Fahrenheit. We regret the error.