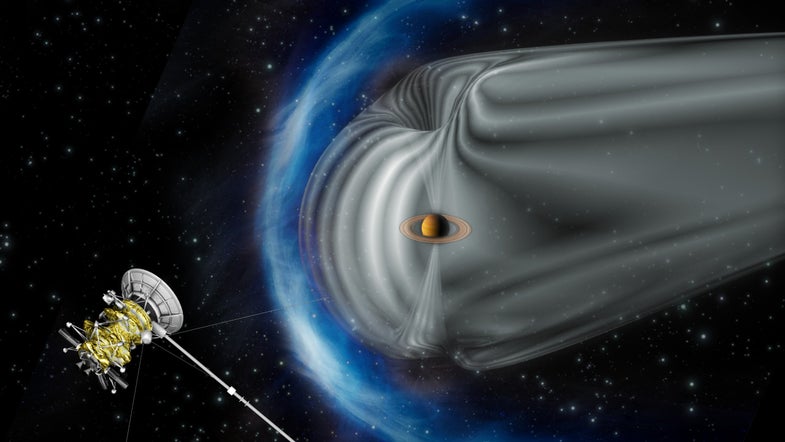 Here on Earth, the mesmerizing lights of the aurora are usually only seen at night—but on Saturn, they can show up near high noon.

A new study published today in Nature Astronomy finds that magnetic outbursts on Saturn that explode around its noontime are powerful enough to drive auroras. This discovery might also help explain mysterious pulses of X-rays detected from Jupiter, researchers said.

When magnetic fields collide, they can unleash powerful explosions. For example, plasmas—the clouds of electrically charged particles that make up stars and most of the ordinary matter in the known universe—naturally have magnetic fields embedded within them, and when swift gusts of plasma from the sun bombard the shell of electrically charged particles surrounding Earth, known as its magnetosphere, magnetic field lines can break and reconnect. Such reconnection can explosively convert magnetic energy into heat and kinetic energy.

Magnetic reconnection powers solar flares from the sun, sending out massive amounts of charged plasma out into the solar system. When the magnetic fields in these flares collide with magnetic fields around a planet, that interaction (also a form of magnetic reconnection) can create breathtaking auroras. It’s the process that drives the northern and southern lights in the skies of Earth, in addition to Mars, Venus, Uranus, Jupiter and Saturn.

On Saturn, previous research had seen reconnection at the dayside of the magnetopause, where the solar wind meets the planet’s magnetic field. It was also detected at the nightside of Saturn’s magnetodisk, a ring made up of plasma created from water and other material sprayed out by the ringed planet’s numerous moons. Electromagnetic forces confine this ring of plasma near Saturn’s equator, and when the magnetic field lines in the magnetodisk change the way they are configured, “during a reconnection event for example, this plasma is released and accelerated”, explains Nicolas Altobelli, a European Space Agency planetary scientist who did not take part in this research.

Scientists expected that such reconnection typically happens only with thin sheets of plasma instead of thicker ones, as it is easier to pack thin sheets together in any given space than thicker ones, said study co-lead author Zhonghua Yao, a planetary scientist at the University of Liège in Belgium, and closer proximity makes the magnetic fields within plasma more likely to reconnect.

However, using data from the Cassini spacecraft, scientists now have direct evidence of reconnection within Saturn’s magnetodisk near its noontime. The high levels of energy they detected from this reconnection are powerful enough to power auroras, they added.

The researchers suggest this reconnection can happen because Saturn spins rapidly enough to thin the plasma in its magnetodisk, even under the noontime pressures of the solar wind. Although more than 760 times larger than Earth, Saturn completes a spin on its axis in about 10 hours, compared to 24 hours for Earth. “This means that planetary rotation plays a far more important role in driving magnetic reconnection than we ever considered,” Yao said.

This discovery may help explain dayside auroras previously seen on both Saturn and Jupiter. “We expect this process also to take place at Jupiter’s dayside magnetodisk, which could be confirmed by the NASA Juno mission that is exploring the Jovian magnetosphere,” Yao said. High-energy reactions during such reconnection may also help explain mysterious X-ray pulses seen from Jupiter, she added.