And it's going to keep on smashing them. 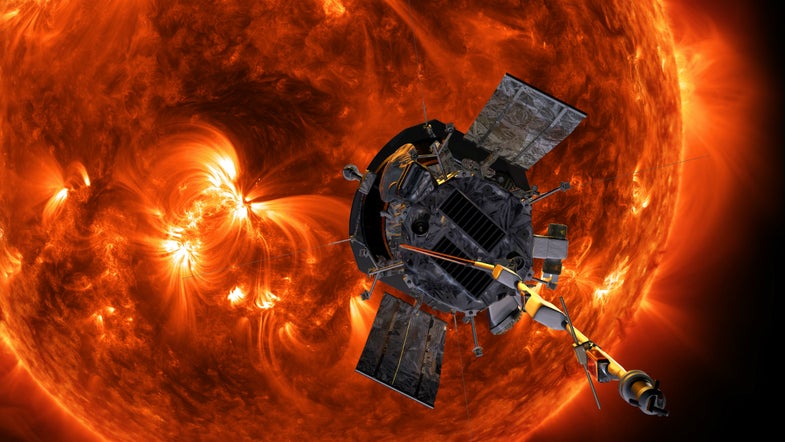 Around 11 p.m. on Monday, NASA’s mission to “touch the sun” officially broke the record for fastest moving spacecraft—therefore becoming the fastest human-made object ever, relative to the sun. Registering just one historical moment wasn’t enough for the plucky explorer though, because on the same day the Parker Solar Probe also got closer to the sun than any other probe before it.

“It’s been just 78 days since Parker Solar Probe launched, and we’ve now come closer to our star than any other spacecraft in history,” said Project Manager Andy Driesman in a press release.

The new speed to beat is 153,454 miles per hour as viewed from a stationary sun, according to the team’s calculations. That’s more than 90 times faster than your typical bullet and more than twice as fast as the Earth orbits our host star, which is the fastest most of us will ever get to travel. That clip also works out to just over two ten-thousandths of the speed of light, or 230 “microlights,” as astrophysicist Jonathon McDowell put it on Twitter. As of Monday, that ferocious velocity had brought it 26.55 million miles away from the sun’s surface, or about three times closer to the star than Earth’s orbit.

It’s no coincidence that Parker broke the two records, both set by the German-built and American-launched Helios 2 probe in April 1976, on the same day. The vast majority of that motion came not from the spacecraft’s launch rocket or engines, but from the fact that it is plummeting toward the center of the solar system.

If we think of the direction things move under the force of gravity as “down,” then in a gravitational sense, the sun sits at the bottom of an upward-opening funnel—which the planets circle like one of those spiral coin wishing wells at the airport. The Earth “rolls” around this gravity well at 67,000 miles per hour (or 30 kilometers per second in the astrophysically preferred units). Anything faster will rise up out of the well, like probes such as Voyager and New Horizons did in order to reach the outer solar system. Anything slower will start to spiral in toward the sun like a quarter circling the drain.

McDowell of the Harvard-Smithsonian Center for Astrophysics likens Earth’s place in this gravitational well to the shallows at the beach. “We have to go a long distance to get out of the solar system, but we don’t have to get up very much,” he says. “Gravity is only lapping around our ankles.” New Horizons, which holds the record for launch speed from Earth, took off at 16 kilometers per second relative to our planet, but in the same direction as our orbital movement, boosting it by one Earth speed and pushing it out toward Pluto.

Parker took the opposite approach. Falling into the sun would be easy if the craft were stationary, but it started out cruising at Earth’s formidable velocity—so first, NASA’s rocket scientists had to slow it down. They fired it backward against Earth’s orbit, cutting its speed relative to the sun nearly in half and leaving it free to start falling inward. “That’s why the distance to the sun and the speed records are tied together,” McDowell says. “The closer you get, the deeper you are in the gravity well and the faster you’re falling.”

And fall it did. Now pushing 70 kilometers per second, the craft will continue to set new records continuously until its closest approach to the sun on November 6, when it will reach 95 kilometers per second (212,500 miles per hour) as it passes five times closer to the star than Earth ever does. From there it will come around the sun and start to climb back out of the gravity well, completing the first half of many orbits that will bring it closer and closer to the star’s surface.

Those loops will eventually plunge it directly into the poorly understood plasma that surrounds the sun. The corona paradoxically burns millions of degrees hotter than the surface of the star itself, despite extending millions of miles into space. NASA expects that Parker will directly sample this unexplored zone on its 22nd orbit, which will take place in about six years.

Until then it will continue to best its own speed and closest approach records, which McDowell says is a fitting update to the largely overlooked legacy of Helios 1 and 2. “The great 1970s space probes, the really ambitious ones, there were three pairs: Viking, Voyager, and Helios. You’ve heard of Viking and Voyager, but you’ve never heard of Helios,” McDowell says. Its measurements of the solar wind and magnetic field didn’t capture the public’s imagination in the same way as its camera-bearing cousins did, he suggests, but its speed record stood for nearly 42 years nonetheless.

Helios 1 still holds the record for fastest spacecraft moving with respect to Earth, at about 96 kilometers per second, but Parker is coming for that superlative too. It should beat that speed on November 5, according to McDowell, and set a new record of 110 kilometers per second two days later.