We may have accidentally formed a protective bubble around Earth

Radio waves might help protect us from space weather. 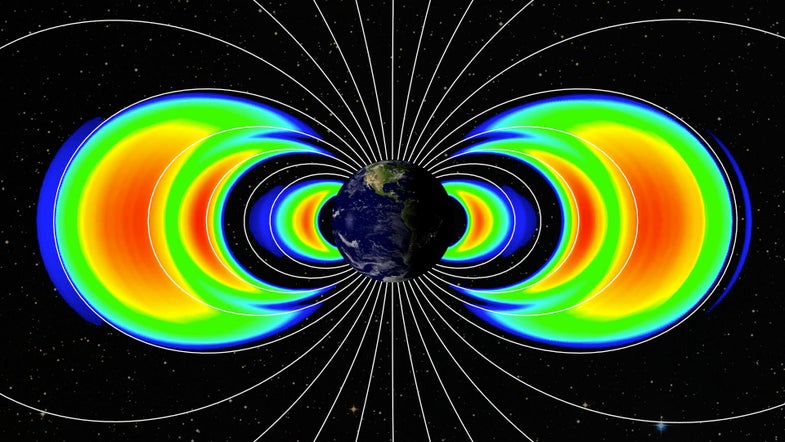 When the Navy wants to send a message to an underwater submarine, it sometimes uses very low frequency (VLF) radio waves. These long wavelengths, beamed from large towers on the ground, are unique in their ability to travel through salty water. But some end up in space instead. There, according to a new report, they may be forming a protective bubble around Earth’s atmosphere.

The discovery comes from the Van Allen Probes—two spacecraft, launched in 2012, that patrol the radiation belts surrounding Earth. The Van Allen radiation belts are zones where charged particles streaming from the sun get stuck in Earth’s magnetic field. These high energy protons and electrons can destroy a satellite’s electronics, which is a constant concern because the belts don’t always stay in one place.

“The conventional wisdom is that the inner edge of the outer belt kind of moves in and out as the atmosphere—especially ionosphere and plasmasphere—grows and shrinks,” says Phil Erickson, a space plasma physicist at MIT. But observations from the Van Allen Probes showed that radio waves may also play a role in determining the location of the radiation belts.

During an intense geomagnetic storm in 2015, a large solar storm knocked back the plasmasphere, but surprisingly the outer Van Allen belt didn’t come any closer to Earth. “The plasma retracted but the belt didn’t follow,” says Erickson. But he and his colleagues noticed something else: “The edge of where these very powerful radio signals stop is the same place where the electrons stop coming in.”

In addition, data from the 1960s suggests that the belt’s inner boundary was much closer to Earth back when VLF transmissions were less common. The team thinks that, nowadays, when electrons shooting out from a solar storm approach Earth, VLF waves deflect them, knocking them off their trajectory and pushing them into the atmosphere, where they get lost.

“At least in the first hours to a couple of days into a solar storm, the waves seem to halt the electrons from coming in further,” says Erickson. “If you wait longer, the story gets more complicated because they gradually diffuse in. But it suggests that if your satellite is closer than 2.8 Earth radii [about 15,000 miles], you may not need to worry about it as much as we thought.”

Sometime this year, the U.S. Air Force plans to launch the DSX satellite, which will test the feasibility of using VLF waves to deflect space radiation. If it works, humanity may be able to harness these waves to help protect against solar eruptions that dump giant clouds of charged particles into the solar system.

To be clear, coronal mass ejections and solar superstorms are still a rare but significant threat to human civilization. VLF waves don’t protect us from protons in the solar wind, which are too heavy for the waves to deflect, or other electrical problems that would result from a major outburst from the sun. The new research “doesn’t say that we don’t have to worry” about solar superstorms, says Erickson. “It tells us we have a lot more to learn about what the detailed effects will be.”

So far, he and his colleagues haven’t had the chance to see how the VLF waves perform during a superstorm—the best they can do is take the current results and extrapolate them to guess what would happen during more intense storms. “It’s possible VLF would still hold up,” Erickson says, “but that’s a total guess on my part. The jury is still out.”

Next, he and his colleagues hope to investigate the phenomenon further, to find out more about how this boundary behaves during normal space weather, to see whether it repeats this behavior during other solar storms, and find out what might make it weaker or stronger.

The findings were published in Space Science Reviews as part of a larger study investigating human-made effects on space weather.