Breakthroughs, stardom, and collapse: the life cycle of a sea arch 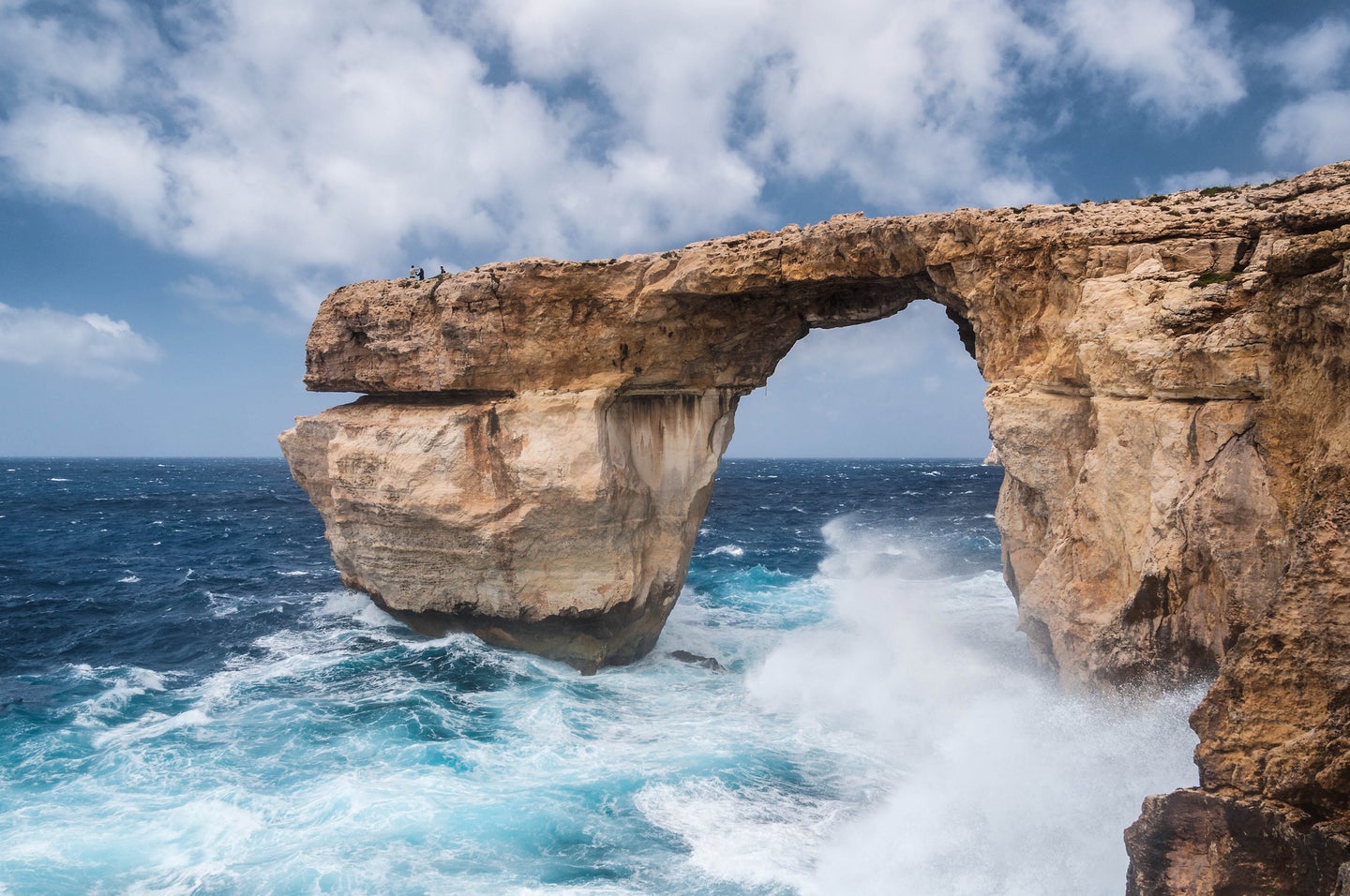 At some point, the constant battering was just too much for the old rocks to handle. Turbulent waves crashing into the stones sent a magnificent landmark into the sea in a spray of saltwater. A moment later, all that remained of the Azure Window of Malta were memories, photographs, and the tattoos of a few particularly dedicated fans.

The Azure Window was a tourist must-see, rising to stardom after its cameo as the picturesque backdrop to the bloody wedding of Daenerys and Drogo in Game of Thrones. Now it’s just a pile of wet rubble.

How did it reach its breaking point? To understand that, we’ll have to go back to the beginning. The life of the Azure Window started about 500 years ago, when it was just an outcropping of sedimentary rock along the Malta coast.

Layers of rock formed cliffs above the waves, jutting away from the coast of the island—Gozo—in a small peninsula. But the layers, rising out of the waters like a dirty birthday cake, weren’t all the same. Some were soft, and others were harder, formed during different times during the Earth’s history.

Waves, sometimes carrying abrasive substances like sand, crashed into these limestone layers repeatedly, slowly breaking down the rock, and carrying bits of it away. The waves found a weak point, and the energy of the repeated strikes of the waves began to hollow out small caves in the rocks. As the years and waves marched on to time’s drumbeat, the caves got larger and larger, and because this was an outcropping, the waves eventually made their all the way through the center, breaking through to the other side, creating an arch.

At this point, the Azure Window was wide open, framing the brilliant blue sea. But the waves didn’t stop pounding. Over time, the window would get bigger and bigger, creating a stunning backdrop for tourists and television directors alike.

At its peak, the top of the arch sat 100 feet above the waves, and tourists could clamber over the natural bridge to get spectacular views of the ocean and dramatic coastline. Divers swam underneath the arch, enjoying the clear blue waters, and Game of Thrones came calling, hauling in massive amounts of sand to create a proper setting for a Dothraki royal wedding.

It was a bright and heady time for the people who loved the sea arch. But everything was about to come crashing down.

In fact, some of it already was. Chunks of rock occasionally fell from the arch, aerial photos showed long fissures that belied the age of the rock, and rough storms continued to beat at the entire structure. To make matters worse, explosives at local construction sites sent vibrations shuddering through the stone.

The local government looked for solutions and advice everywhere. After figuring out that intervention—shoring up the arch artificially—wouldn’t help, They tried banning tourists from climbing on the arch in an effort to reduce the stresses on the structure. Fines of 1,500 Euros were threatened, but not consistently enforced.

In the end, it was inevitable. A strong storm slammed the Azure Window shut, destroying it with the same forces that carved it in the first place. Now, the government is considering how best to honor the long life of a beloved part of the landscape, whether that means leaving the site as-is, creating a museum, or adding using augmented reality to recreate the experience.

But this isn’t the end of sea arches. Their magnificent forms dot coastlines around the world, from Hawaii to the UK.

Erosion isn’t going anywhere any time soon. When one window closes, another one will open.