Pandas Might Be Painfully Pooping Out Their Gut Lining Each Year 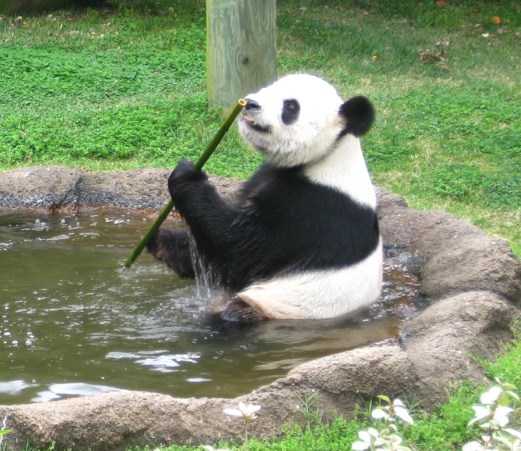 Scientists collected poop from two pandas at the Memphis Zoo (including Le Le, above) and investigated its microbial community. Candace Williams
SHARE

After sifting through piles of panda poop, scientists have an explanation for the digestive troubles the animals suffer every year. Every summer, pandas may be resetting the bacterial communities in their guts by pooping out the organs’ mucus lining, which protects their intestines from caustic digestive juices.

Come summer, wild and captive pandas shift from munching primarily on bamboo stalks to leaves. (This seems to be related to fluctuating amounts of silica in the leaves, likely the plant’s defense against being eaten.) During this period, pandas are hit with bouts of gastrointestinal distress that include abdominal pains, loss of appetite, and mucus-filled poop (called mucoids).

“These endangered bears…suffer greatly from [gastrointestinal tract] disorders,” write the researchers, who liken the experience to having inflammatory bowel disease. The GI problems can take a toll on the animals’ health, as bamboo isn’t very nutritious and pandas must eat up to 83 pounds of it every day. And all of this misery comes shortly after the breeding season, potentially making it more difficult for pandas to carry off a healthy pregnancy.

To investigate the connection between these unpleasant episodes and the animals’ diet, the team collected both mucoids and regular poop from two pandas at the Memphis Zoo in Tennessee. The team then identified the different bacteria in each sample. The poop-dwelling communities changed from winter to summer, although all the stool samples were low in bacterial diversity. This was especially apparent in the feces that immediately preceded a “mucoid episode.” The mucoids were filled with bacteria that are typical found in the mucus lining of the gut.

All of this indicates that switching up their diets does a number on pandas’ gastrointestinal tracts. The leaves have less fiber, which changes the microbial composition of the gut, which leads to damage of the gut lining, which leads to more microbial loss, which causes the pandas to expel their old mucus lining to replace it with a newer, healthier lining. The cycle can continue for weeks after the panda’s diet changes.

Panda bears rely almost entirely on bamboo for their diet, yet they still have a carnivore-like digestive system. “This feature is surprising, given that the switch from an omnivorous to an herbivorous diet occurred approximately 2 to 2.4 million years ago,” the scientists write. “Yet giant pandas have not evolved adaptations seen in traditional herbivores.” Being poorly adapted for an herbivorous diet might be related to the panda’s recurring gastrointestinal distress.

The findings were published May 6 in the journal Frontiers in Microbiology.