Now You Can 3D-Print Objects Made Of Wood Fibers 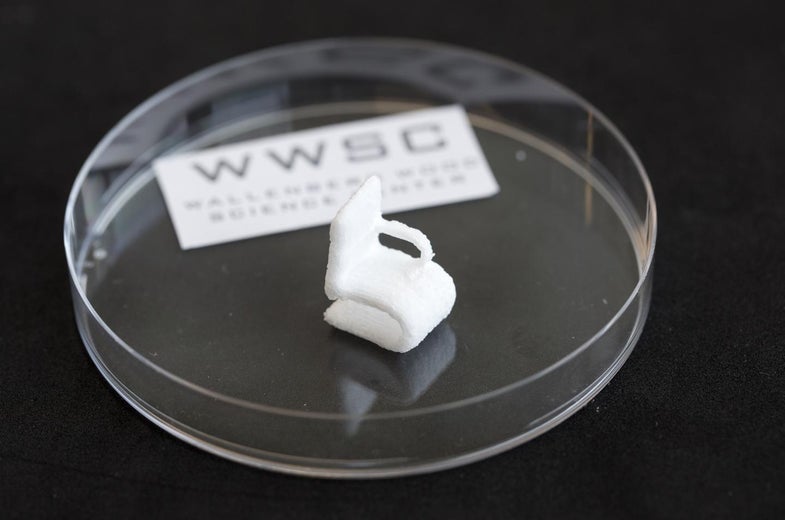 From prosthetic hands to an entire bridge, you can pretty much 3D print anything you can imagine. But the materials to make them are diversifying a bit more slowly. Now researchers from Chalmers University of Technology in Sweden have found a way to 3D print objects from cellulose, a naturally occurring string of molecules derived from wood. The resulting objects are an environmentally friendly and sustainable alternative to the metals and plastics that currently dominate 3D printing. The researchers presented their work this week at a conference titled “New Materials From Trees.”

We’re used to seeing objects and constructions made of wood, but it hasn’t been easy to put it in a form that can be 3D printed. Unlike the metal or plastic commonly used in 3D printing, cellulose doesn’t melt when heated, which means it’s much harder to mold into different objects. To work around this, the researchers mixed tiny fibers of cellulose in a liquid gel made of water. The researchers tested their mixture on a 3D bioprinter, which had been used previously to make scaffolds where cells grew before being implanted in a patient.

Once the object has been printed from the gel, it has to dry, which is critical for maintaining its final shape. The researchers figured out a way to freeze the object, then slowly remove some of the water so that the final product is in the desired shape.

The researchers were also able to insert carbon nanotubes into the dry object so that it could conduct electricity. When they tested one conductive gel with the nanotubes and one without, they were able to create a 3D electrical circuit.

Found in the cell walls of plants and algae or secreted by bacteria, cellulose is a very abundant polymer. 3D printed objects made of cellulose would biodegradable and could even capture carbon dioxide that would otherwise pollute the atmosphere.

Paul Gatenholm, a professor of biopolymer technology at Chalmers and one of the study authors, envisions a huge range of applications for products printed with cellulose. “Potential applications range from sensors integrated with packaging, to textiles that convert body heat to electricity, and wound dressings that can communicate with healthcare workers,” he says. In the future his team plans to experiment with other organic compounds derived from wood.