But it probably won’t 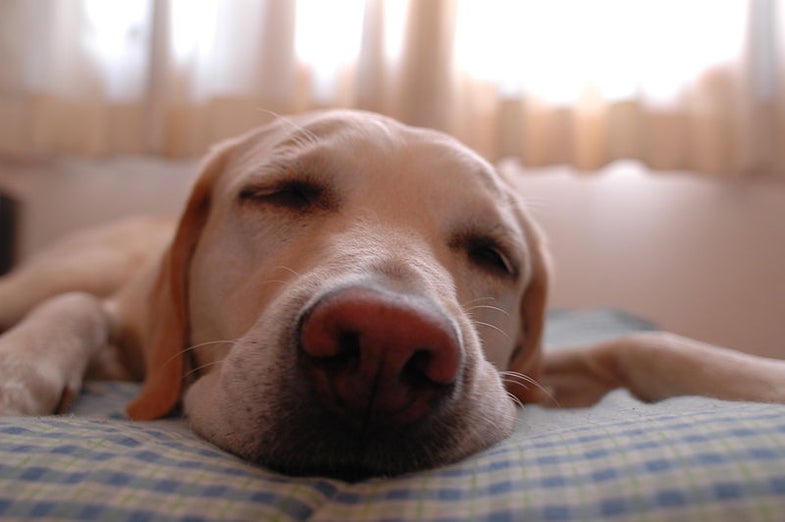 The newest outbreak of canine influenza has almost reached epidemic proportions; last month, more than 1,000 dogs in the Chicago area were infected, and cases have popped up in a dozen states around the country. Viruses like the flu often move between animal species, and humans are no exception, especially because we live in such close quarters with our canine companions.

Flu symptoms in dogs are surprisingly similar to those in humans: They have runny noses, coughs, and are lethargic. And like humans, dogs can only transmit the flu to one another. Death from the disease is rare, but in dogs with weakened immune systems–if they’re old or already sick–it can sometimes be fatal. Places where dogs congregate, like dog parks, shelters, or daycare and boarding facilities, become opportunities for the virus to spread to a new host.

Traveling in an infected dog is likely how this particular strain of the flu, called H3N2, came to the U.S. in the first place. “The genetic fingerprint of the virus isolated in Chicago is nearly identical to a virus that was circulating in Korea and other parts of Asia,” says Edward Dubovi, a professor of virology at the College of Veterinary Medicine at Cornell University. His guess is that a dog sick with the flu was brought into the country. Though border patrol often requires some paperwork to show that animals have received the proper vaccinations, these mostly pertain to animals used in agriculture, not companion animals like dogs and cats. “Individuals from state to state who deal with companion animals admit that there is a highly porous border; companion animals are fairly unregulated and ignored to a certain extent,” Dubovi says.

Before it moved to dogs, H3N2 was only found in birds. Viruses are amazingly plastic, Dubovi says, and able to infect different species, because the virus is constantly mutating and changing. Eventually, one of these mutated versions found its way to a dog and, against sizable odds, was able to infect it. This frequent mutation is part of the reason you have to get a new flu shot ever year; the virus changes so quickly that sometimes we have trouble mounting our defenses to keep up with it.

Frequent mutation is part of the reason the virus could also move to humans. A dog living in close quarters with his owner might have just the one strain of the mutated virus that could take hold in humans. But the flu has another scary quality that may help it make the jump: The flu not only mutates, but can jumble up the order of its genes, like a game of genetic Boggle. “So, hypothetically, you could have a dog with H3N2 [a different strain of canine flu], and the owner of that dog could have H1N1 [which started in swine]. If the owner sneezes on the dog, then the dog could get a dual infection, and out of that could come something truly nasty,” Dubovi says.

It’s not really likely that this flu strain will make the leap to humans, Dubovi emphasizes. But it could happen. “It’s like buying a lottery ticket. It’s a theoretical possibility, and there’s no way of predicting. The influenza virus has the ability to produce tremendous surprises.”

Dog owners are already taking the right steps to slow the outbreak of canine flu: keeping them away from places where dogs congregate, at least for a short while. With any luck, this strain might even disappear, Dubovi says.