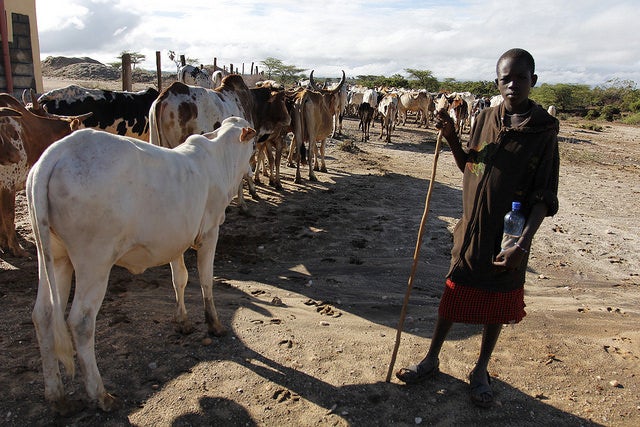 The answer to a deadly disease in Africa could be a babbling, bumbling band of baboons–or at least their genes, anyway.

One-third of the African continent is almost completely free of cattle. About the size of the continental U.S., the region cannot support livestock because of the tsetse flies–tiny bugs no bigger than a half an inch–which live there.

Molecular geneticist Steve Kemp may have a solution that could help increase agricultural success on African farms, and it’s all thanks to a baboon gene. This gene produces a protein that kills a protozoan called Trypanosoma brucei, which causes a deadly disease in both humans and cattle and is often carried by the tsetse fly.

Cattle-free farming puts farmers at a huge disadvantage, Kemp told National Geographic. “Western people don’t understand the role of livestock in developing world agriculture,” he said. “[Westerners] think of steak and milk. But livestock are fundamental. If someone’s main business is growing maize, but he’s got a bullock that can pull a plow in the field and pull a cart to market, that’s huge.”

In animal-free zones, farmers work 90 percent of the land by hand. A lack of protein also plays a role in malnutrition, and more than a quarter of all malnourished people in the world live in sub-Saharan Africa.

Kemp, who has been working with the disease since the 80s, first noticed that one breed of cattle was somewhat tolerant to the disease. However, he ran into complications. There are at least ten genes involved in their tolerance, and tolerant animals can still spread the disease.

Meanwhile, biologist Jayne Raper was studying baboons’ resistance to T. brucei to help fight human disease. She discovered that a ApoL1, a protein in baboon cholesterol, killed the protozoan by punching holes in its cell walls. Raper and Kemp began working together, and Kemp now estimates they will have a transgenic cow within a year. After that, they’ll begin testing to make sure the gene works in cattle.

Some have expressed concerns or doubts about this method, especially to the aspect of genetically modified organisms. Some have suggested other methods–like drugs, for example–to solve the problem. However, there’s no evidence to indicate that genetically modified foods are harmful, and Kemp thinks transgenic cows will be less expensive and more sustainable than drugs. “We don’t imagine this is a silver bullet,” he said. “But it does address the single most important pathogen over huge areas of Africa.”