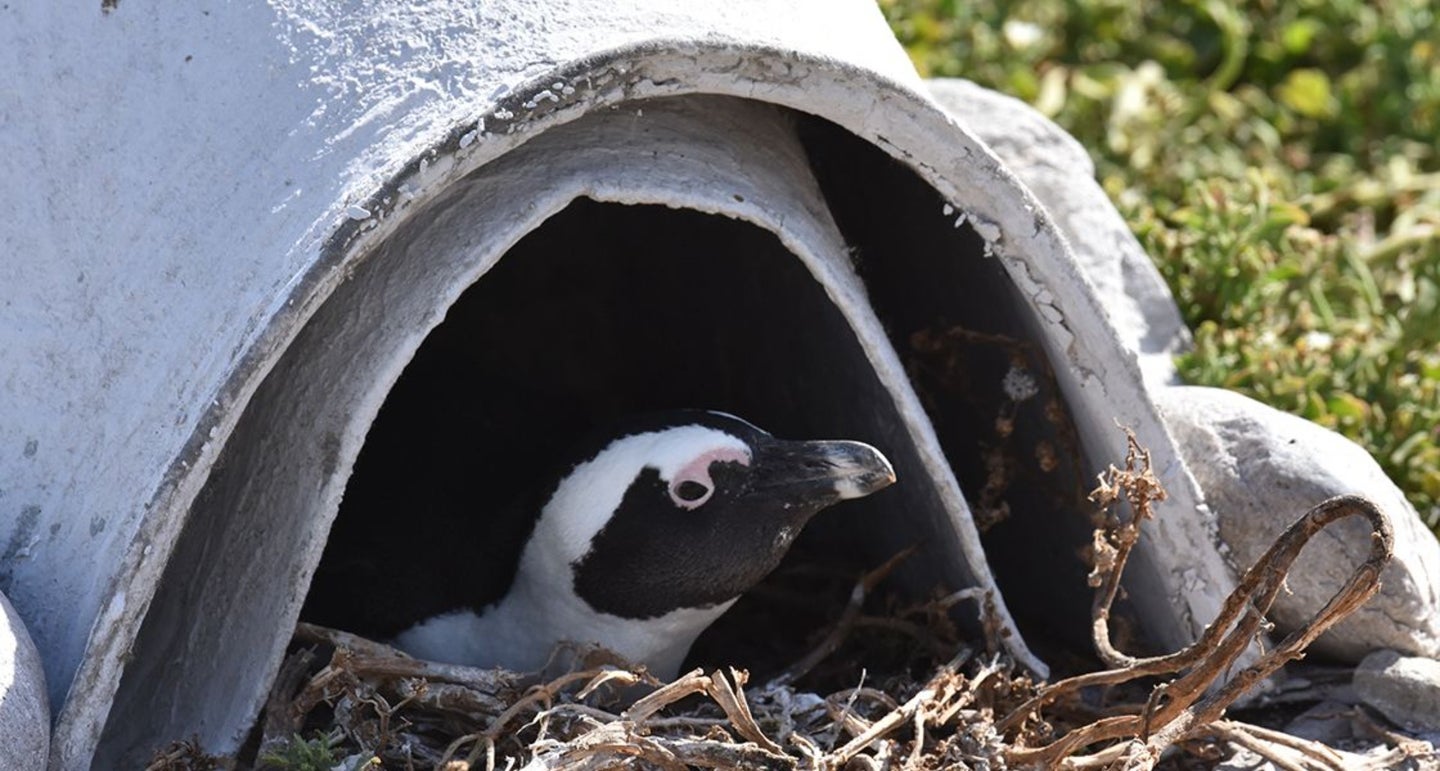 Algoa Bay, South Africa, is home to nearly half of the world’s remaining African penguins, whose numbers have fallen as much as 98 percent since 1900. Photo by Kevin Graham/African Penguin Nest Project
SHARE

In the past, the seabirds laid their eggs in burrows dug into centuries-old layers of their own excrement. But in the 1800s, most of the guano was scraped up by traders and shipped to the United Kingdom as fertilizer. Since then, many penguins have nested in the open, exposing themselves to heatstroke and their eggs and chicks to desiccation and predators. Shaun Welman, a zoologist at Nelson Mandela University (NMU), has seen penguins sitting with eyes shut, heads drooped, and beaks agape in the punishing midday heat, struggling to protect their eggs.

Because penguins evolved to retain heat in frigid water, they can easily overheat on land. Typically, penguins leave their nests regularly to cool off in the sea, but without proper burrows, this leaves their eggs unprotected.

“We’ve now put this entire species at risk of extinction, essentially because of human exploitation and greed,” Welman says.

Since 1900, the African penguin population has fallen to a fraction of its former glory: a mere 48,000 birds, down from as many as three million.

Fortunately, a team of researchers and conservationists working under the banner of the African Penguin Nest Project seems to have hit on a solution. Over the past four years, the team has designed and deployed more than 1,500 handmade ceramic nest boxes in five penguin colonies including Bird Island, located in Algoa Bay, an area that is home to nearly half of the world’s remaining African penguins.

A new study coauthored by Welman shows that the ceramic design provides the best nests on Bird Island. The artificial nests are even cooler than the penguin’s own guano burrows, a tiny number of which still survive.

Welman and colleague Lorien Pichegru, the acting director of the Institute for Coastal and Marine Research at NMU, found that older artificial nests made of cement get too hot. Inside, temperatures at times exceeded 40 °C and occasionally even 50 °C, putting eggs at risk of overheating. In previous research, Pichegru also documented perilously high temperatures in artificial nests crafted from fiberglass.

But the new ceramic nests, made of two molded shells of gray fabric soaked in a ceramic slurry and fitted together to look like a tiny igloo, kept the birds cool.

The ceramic nests remained around 1 °C lower than a penguin’s resting body temperature of 37.6 °C, while humidity stayed above a comfortable 70 percent. The nests were so effective, Welman says, that “if adults had to abandon nests for whatever reason, the eggs would never be at any risk of overheating.”

Even in milder weather, the new nests make a difference. In a separate experiment, on a sunny 25 °C day, the African Penguin Nest Project team logged temperatures of nearly 51 °C on the ground outside a ceramic nest box and just 23 °C inside.

The discovery of a viable artificial nest could not have come soon enough since it appears that African penguins are even more sensitive to direct sun than previously thought. On Bird Island, Welman and Pichegru saw birds panting in an effort to cool down in temperatures as low as 22 °C. With climate change, birds nesting in exposed areas will increasingly be subjected to dangerous conditions.

Christina Hagen of BirdLife South Africa, who was not part of the study, says the results show that ceramic nests are a potentially useful conservation tool. “Finding effective conservation solutions is vital given the dire status of the African penguin population,” she says.

The main threat to African penguins is overfishing of anchovy and sardines, the seabirds’ favored prey. Scientists and conservationists are pushing the South African government to close commercial fishing around six African penguin breeding colonies until populations recover. But without refuge from rising temperatures and predators on land, those efforts alone may not be enough. Ceramic nests could help to give these beloved seabirds a fighting chance.