Short on budget, the Space Launch System reportedly doesn't have a game plan 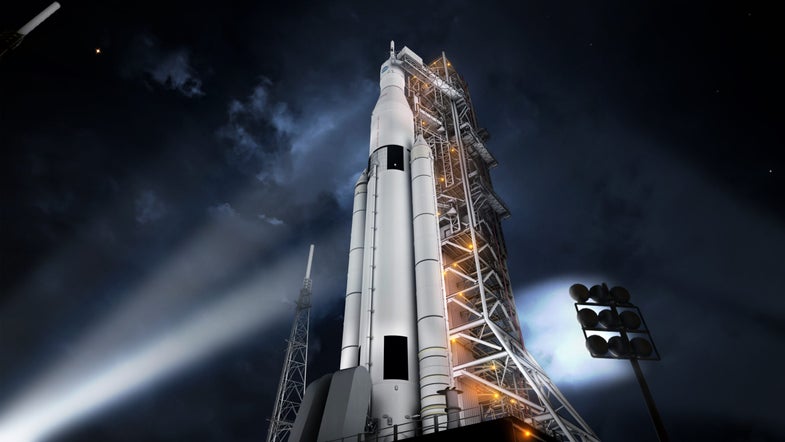 In 2010, President Obama scrapped the NASA program that would bring humans back to the moon and then Mars. The Constellation program, which began under the George W. Bush administration, was “over budget, behind schedule, and lacking in innovation,” according to President Obama.

So instead of Constellation we’re getting the Space Launch System (SLS), and that’s not going terribly well either. According to NASAspaceflight.com, the project to build a heavy lift rocket that could carry humans and their copious luggage to Mars doesn’t have a game plan, and funding issues are at least partly to blame.

NASA is aiming to bring astronauts to Mars in the 2030s, and SLS is supposed to be the vehicle that gets us there. NASA has been heavily promoting the idea that the SLS is the future of space travel on social media over the past several years. However, NASAspaceflight.com spoke to “several” unnamed NASA employees who pointed out several problems after a recent meeting was held about the vehicle at Kennedy Space Center.

When adjusted for inflation, NASA’s budget is at the lowest it’s ever been

Although Congress recently gave NASA a raise, it’s not nearly enough to cover all of NASA’s projects. The agency’s 2016 budget will increase to $19.3 billion, of which $2 billion will be allocated toward SLS. However, the development cost for SLS is projected to total $18 billion. The agency cites budget constraints as an obstruction to making detailed plans for the SLS.

The first crewed flight of the SLS was recently delayed from 2021 to 2023, and it looks like the date could be pushed back again.

Getting to Mars will require a lot of preliminary launches that gradually increase in complexity. NASA wants to start by launching small payloads into space, then move on to launching an unmanned Orion capsule to the moon, and then try a crewed mission to the lunar space before even thinking about going to Mars.

But now NASA is considering changing the design for one of the rocket’s upper stages earlier than previously planned. Normally that would mean extra unmanned launches would be needed to test out the equipment before astronauts climb aboard, and that could offset the entire “Journey to Mars” by another couple of years.

Kathryn Hambleton, a NASA press officer, said that “NASA remains on track” to launch the SLS in 2018 on an uncrewed mission, and then to launch a crewed mission to lunar space in 2021–with the upgraded upper stage to boot. We’re requesting more information on how that would work.

With a delayed schedule, presidential politics could interfere

If the SLS’s launch schedule changes, it could delay a launch that would bring astronauts to rendezvous with an asteroid in lunar space until the mid-2020s. This mission is meant to be a test-run for a real Mars mission, and the delay would put it right smack in the middle of an awkward timeframe when a new president will presumably be taking office and setting new goals for NASA. Could that new president decide to scrap the asteroid rendezvous plans? See Obama Constellation example above.

SpaceX envisions building its own heavy lift rocket capable of getting to Mars, but the company is not talking about how that rocket might stack up against the SLS. Perhaps that’s because the designs are too vague for now, or perhaps the company doesn’t want to bite the hand that feeds it–the company gets funding from NASA, and the agency is a prime customer for SpaceX launches.

We’ve reached out to NASA for comment. We’ll updated this post if we hear anything interesting back from them.