Full steam ahead for Mars 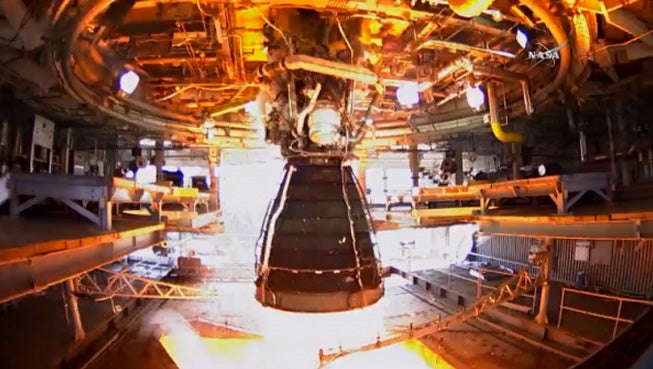 Mankind could leave its first footprints on Mars sometime in the 2030s. And if we want to get there, we’re gonna need a new ride. That’s why NASA’s building the Space Launch System (SLS), a heavy lift vehicle that’s intended, eventually, to carry astronauts into deep space.

To get us there, NASA is trying out a souped-up version of the space shuttle engine, and they just took one for a test-drive today. At the Stennis Space Center in Mississippi, the RS-25 engine burned for 9 minutes–or about as long as the engines would fire during a real launch–roaring and spitting flames and steam like a caged dragon. It was pretty epic.

The burn went off with out a hitch, and the team noted no anomalies–though they’ll be sifting through the data for at least another week.

When the SLS launches in 2018 (hopefully), its main rocket booster will be powered by four RS-25 engines. Whereas the shuttle version of the RS-25 packed 491 thousand pounds of thrust, the upgraded SLS version reaches 512 thousand pounds, providing more power to bring humans and cargo far beyond the International Space Station.

*Correction, 8/14 at 11:55am EDT: The original post mistakenly stated the Stennis Space Center is in Missouri. The correct location is Mississippi.