Who You Meet At A SpaceX Launch 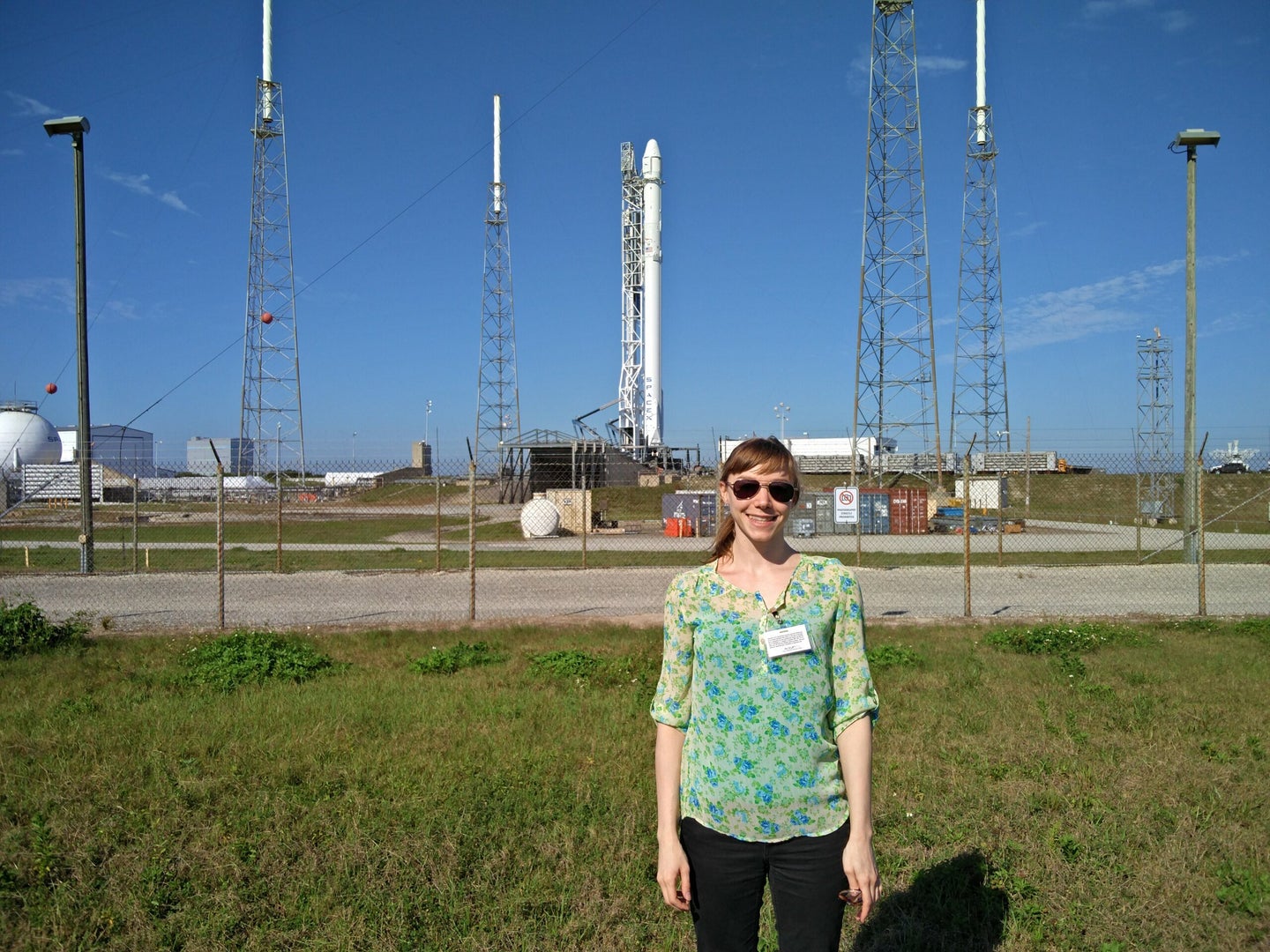 The Falcon 9 is larger than it appears in this photo. Sarah Fecht/Popular Science
SHARE

“Have you been here before?”

“Is this your first launch?”

The way to strike up a conversation at a rocket launch press event is, apparently, to ask how many rocket launches your partner has been to. It is surprisingly effective, and I found myself doing it, too, as if I was already a rocket launch veteran.

I had the amazingly good fortune to attend the SpaceX launch that just sent 7,000 pounds of supplies, including an inflatable space habitat, to the International Space Station. Then the company made history by landing its rocket booster on a drone ship. NBD. I came to Cape Canaveral as a rocket launch virgin, but by the time I left, at least three people said I brought the good luck. 1, 2

1. There’s always been a lot of playful superstition around rocket launches, and some people bring their own lucky charms.

2. I’m not sure everyone else agreed that I was good luck after I delayed the entire press bus one morning when I lost my badge, and then again in the evening when I lost track of time.

I met some wonderful people at the launch, and made friendships that I hope will last. But in a lot of ways I was an outsider looking in at a curious subculture, and the following are my anthropological notes. (Disclaimer: these are my initial impressions and they’ve not been thoroughly vetted. Also, I didn’t set out with the intention of writing this article, so most of the quotes are paraphrased from memory.)

At the core of the group are the Floridians who come to nearly every launch. And not all of them are locals, either—some drive for hours to see the liftoff. They all seem to know each others’ names, and most have been coming to these since the days of the space shuttle. They refer to each launch by its technical name.

Translation: “We met at the Spacex Cargo Resupply mission that launched to the ISS in January, 2015.”

Translation: “I haven’t been here since the mission where SpaceX first docked its Dragon capsule to the ISS.” (COTS stands for NASA’s Commercial Orbital Transportation Services program, and COTS-2 occurred in May 2012.)

You can see why the abbreviations are handy, but it’s somewhat baffling if you don’t quite remember the context and timing of each mission. 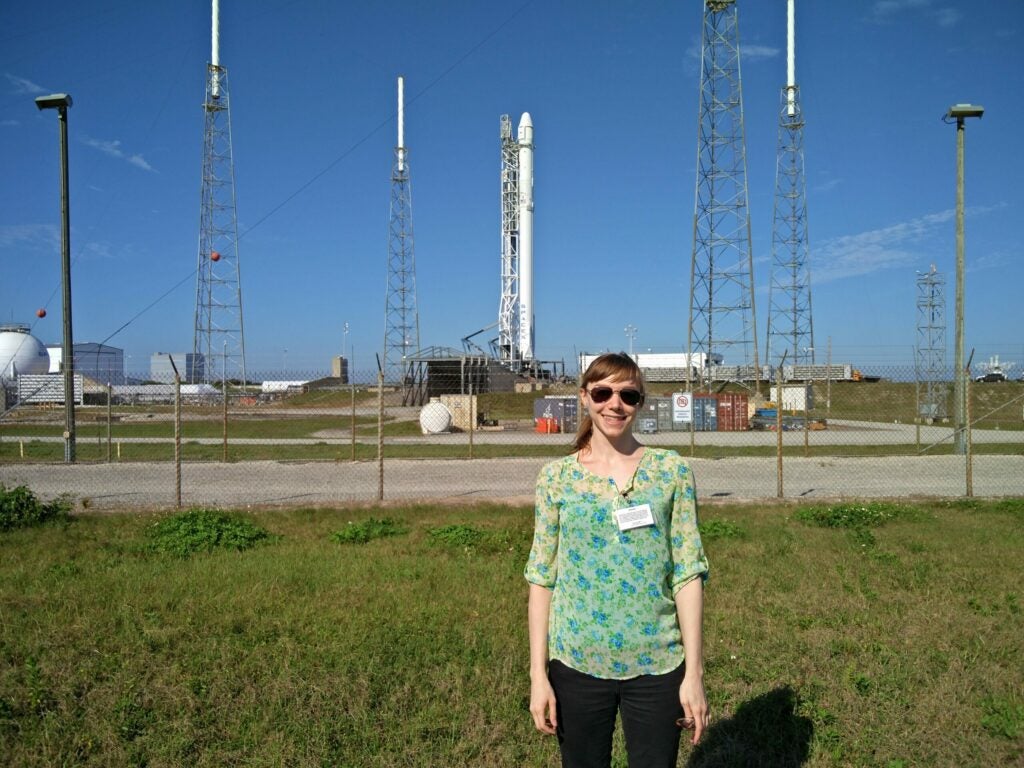 The Falcon 9 is larger than it appears in this photo.

In a way, these folks are kind of like rocket launch groupies. Smart, welcoming, wonderfully nerdy groupies, who saved my butt on multiple occasions. Like explaining where to pick up a mission patch after the launch, and holding the bus for me while I was dicking around like a newb. 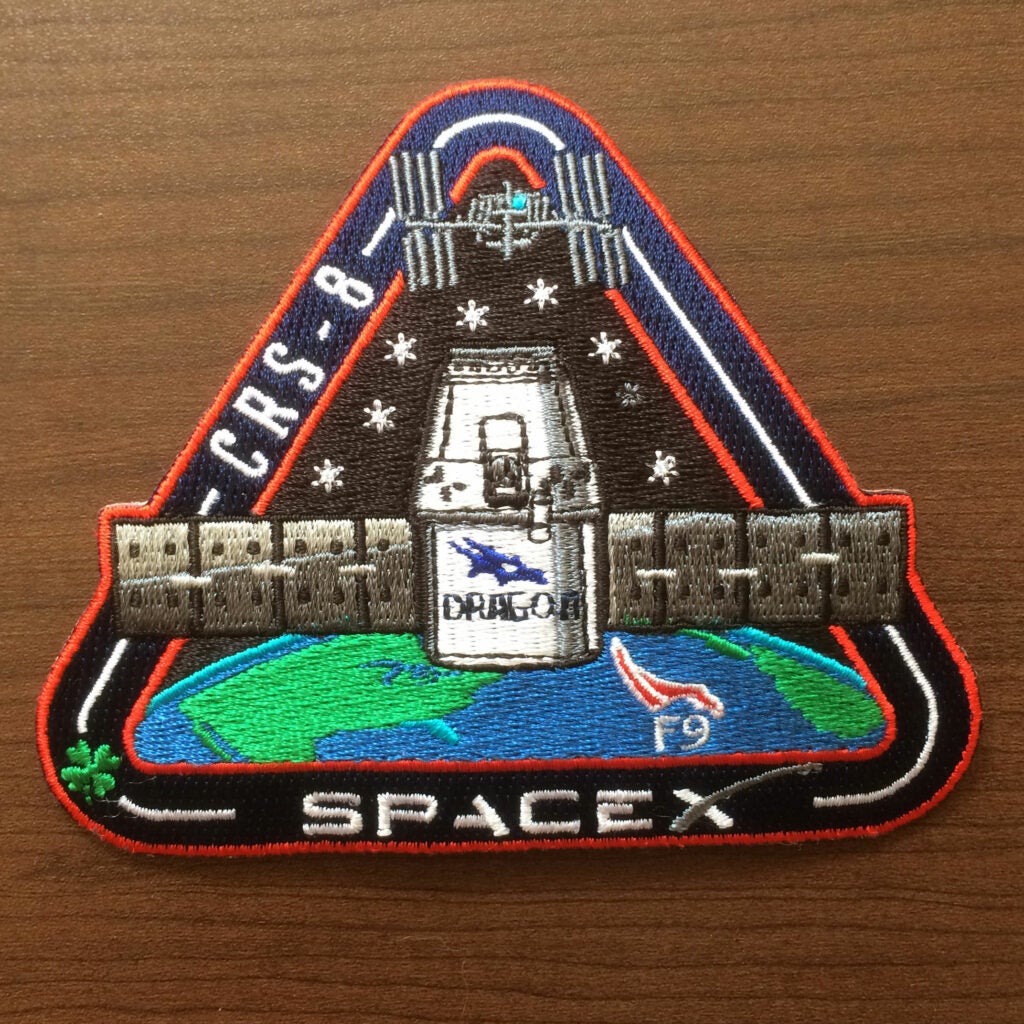 The mission patch from Friday’s launch

Mission patches like this are a reproduction of the ones an astronaut wears in space, but most missions have them nowadays, even uncrewed ones. “CRS-8” stands for the fact that this is SpaceX’s eighth mission under NASA’s Commercial Resupply Services contract.

There are also a few subgroups within the core.

The Curmudgeons are predominantly older white males. These guys are hardcore. Legend has it they’ve come to every launch, even during the dark days between the dismantling of the shuttle program and the rise of commercial spaceflight, when NASA was only launching satellites into orbit.

While their loyalty is commendable, they’re bullies. They chuckle whenever someone asks a question that they think is dumb, and they seize every opportunity to show off how much they know. An overheard snippet on the bus:

Curmudgeon: “You can see the changes they made to the strongback.”

A lot of these guys are bloggers for niche web sites.

One of the curmudgeons ran into a younger reporter with his camera bag. He ripped her shirt, and then proceeded to tell her she should have gotten out of his way. (He later apologized after finding out she was from a major news organization.)

Another time a (perhaps well-intentioned) gentleman tried to explain to me why it’s good to use a camera with high resolution. I became short with him and explained that I crop photos pretty much every day of my life. Realizing he had insulted me, I think, he explained by saying, “I only said that because a lot of people who come through here don’t know how to work a real camera.”

Which brings me to group number 2:

A mysterious group of regular (non-press) folks whom NASA brings in to post about the launch on Twitter, Facebook, Periscope, and whatever else the kids are using these days. I never got to meet anyone in this group, because NASA keeps them distinctly separate from the regular media folks.

Regular press and Social Media used to mingle in the old days, but the word on the street is that the Curmudgeons complained about it and got them relegated. I’m inclined to believe this, judging from how much the Curmudgeons bitched about and ridiculed Social Media even though they didn’t get in our way or affect us at any point during the two-day event.

These are the folks from AP, Reuters, and the other major news organizations who don’t bother to take the media tours—as far as I could see, they just show up for the launch and the press conferences. Probably because they’ve either seen it all before, or because they don’t want to put up with the Curmudgeons’ blustering. Maybe both?

This group actually only had one member in it, who we’ll not name out of courtesy. This person seemed completely uninformed about SpaceX, rocket launches, and space exploration in general. His long-winded and uninformed questions made nearly everyone—from Curmudgeons to Venerables alike—cringe. Some people even got a little mean.

I’m including him here not to ridicule him, but to show that we all have a little Curmudgeon in us. Perhaps this is a bit like what the Curmudgeons feel whenever one of us younger reporters asks a question that to them has an obvious answer.

So What’s It Like To Watch The Launch In Person?

There are two options to view the launch as a member of the media. The best way, apparently, is to view it from the top of the VAB. That’s the Vehicle Assembly Building where the Saturn V rocket (which carried the Apollo missions to the moon) was built. It’s really freaking tall. You could drive a bus down one of the stripes on the flag that’s painted on it:

Unfortunately, space on the VAB is limited to a few dozen people, and you have to show up right at 7 am to get a spot. By the time I cluelessly wandered in at noon, the waiting list was already a few pages long.

For the rest of us, two press buses dumped us off in a small field with pretty much nothing but a port-a-potty in it. A few miles away, across a large body of water, I could faintly make out the launch pad. A few speakers boomed NASA’s audio commentary at us, but it was hard to hear it through the echoing and the chatter of the media folks.

The launch was incredible. Searingly bright white light shined through the orange glow of the exhaust, and at first I couldn’t hear the rocket and was disappointed. Then, few seconds later, the sound waves rushed in, and we could hear and feel the vibrations of the rocket ripping through the atmosphere faster than the speed of sound.

As awesome as it was to see the rocket take off, I’m not entirely sure it was enough to keep me coming back for every launch, even if I didn’t have to fly in from New York to see it. Not having the livestream in front of my face with a countdown clock and explanation of what was happening made me feel a little cut off. And when the rocket’s first stage came back down for the landing, we found out about it exactly the same way everyone else did: via the livestream, which someone was watching on a phone.

When the news filtered through the crowed, cheers went up around the field. We had all witnessed history being made, together.