A Visualization Of The Most Invisible, And Influential, Part Of Political Campaigns

An animation by Northeastern University's LazerLab shows what's being donated, and where. 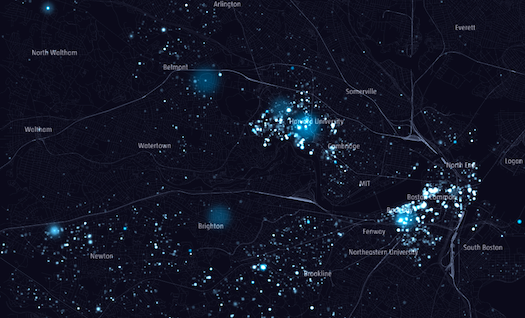 When I hear the phrase “political action,” I think of public demonstrations. But the most influential form of political action has nothing to do with making a sign or attending a rally–it’s about donating money, and it’s not done in public.

To visualize this (mostly invisible) form of political action, artist-researcher Mauro Martino, sociologist Sasha Goodman, and other members of Northeastern University’s LazerLab team created software to download, process, and geocode data from thousands of files submitted to the Federal Election Commission by political action committees (PACs). Next, they used several visualization tools to create an animation showing the location and timing of campaign contributions throughout 2012. They zeroed in on Boston, because that’s where they live, but the model could be applied anywhere.

On the project’s website, the researchers explain their visualization, which they call “MoneyBombs,” this way:

We identify two types of temporal bursts of campaign contributions. We call both “moneybombs” because they reveal a temporal clustering. The first type occurs when many small donations are given on the same day to a candidate. We call this a grassroots moneybomb. The second are bursts of extremely large donations, that take advantage of campaign finance laws and allow individuals to donate more than the traditional $5,000 limit. We call this the Joint Committee moneybomb.

In an email, Martino told me that the LazerLab team–which is dedicated to the study of social networks and human behavior–created the visualization to show how campaign contributions follow “a predictable pattern of waiting punctuated by moments of intense action.” Also, Martino says, “We were motivated by uncovering what people around us were doing politically.”

You can view more MoneyBomb animations on the team’s website.