Lockheed Martin Wants To Send Humans To Mars In 12 Years

Orbiting laboratory could pave the way for a landing party 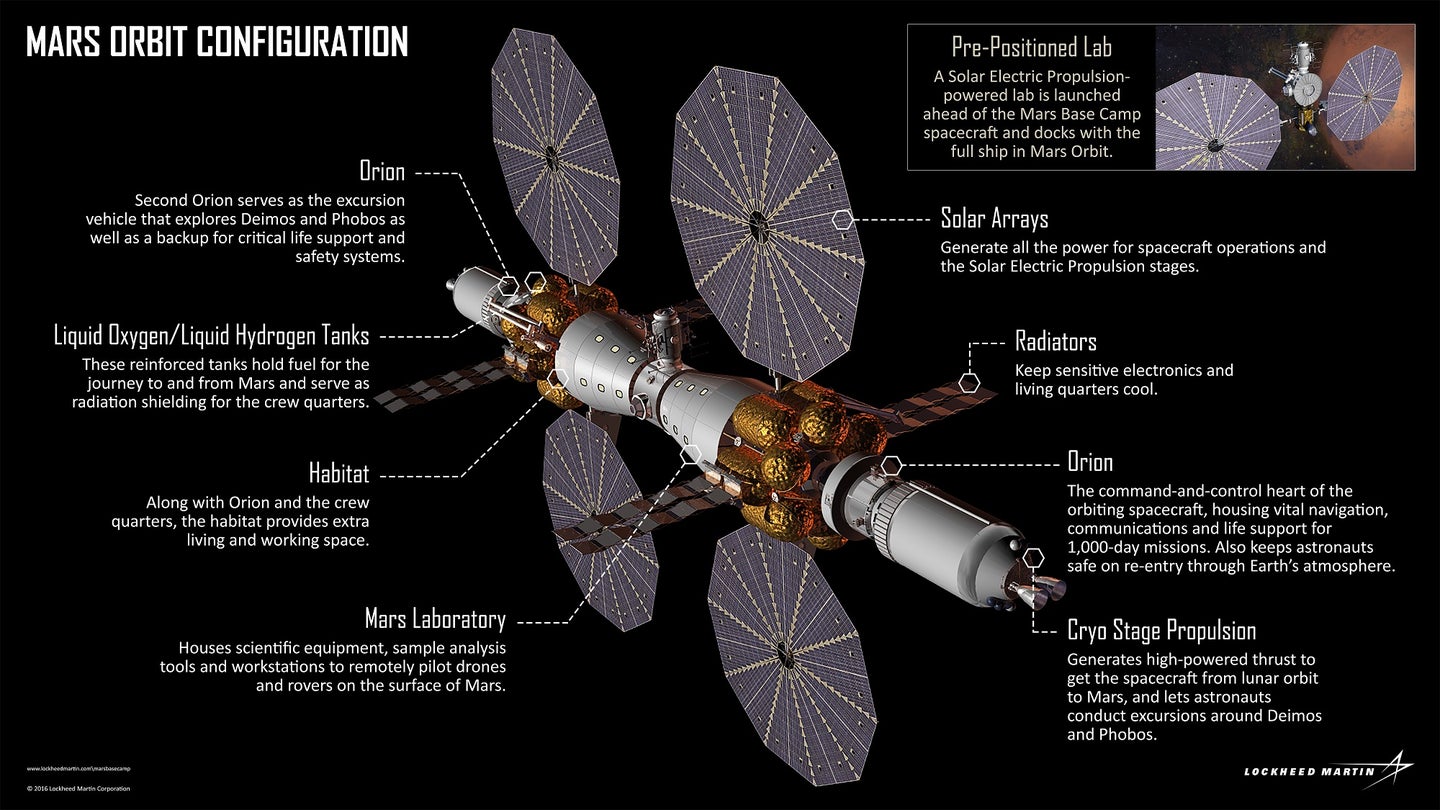 Concept drawing of the Mars Base Camp. Lockheed Martin
SHARE

Before our species set foot on the moon, we orbited it first. The same will probably be true for Mars, and on Wednesday, Lockheed Martin plans to unveil its vision for a spacecraft that could make it happen. The “Mars Base Camp,” as the company is calling it, would set up a laboratory, staffed by 6 astronauts, in Mars orbit in 2028.

Up to now, NASA has outlined the first few steps to Mars. It’s building a heavy-lift rocket, the Space Launch System (SLS), and working with Lockheed to build the Orion crew capsule. The rocket and capsule will launch for the first time, uncrewed, in 2018, and then in 2023 they’ll carry astronauts into deep space, just beyond the moon, for the first time ever.

But after the moon it’s still a very long way to Mars, filled with unknowns, and then once you get to Mars, landing is a whole new challenge. This is where NASA’s plans get particularly vague.

“We think that orbiting Mars is a necessary precursor to landing humans on the surface,” Tony Antonelli, Lockheed Martin’s chief technologist for civil space exploration, and a former NASA astronaut, told Popular Science. “NASA has that in their plans, and we’re coloring in the details.”

Although NASA didn’t commission Lockheed to come up with the Base Camp concept, the company is hoping the space agency will consider the design as it continues to solidify plans to land on Mars in the 2030s or 40s.

Lockheed will formally announce the spacecraft concept tomorrow at the second day of the Humans to Mars conference.

You won’t find any suspended animation pods or magnetic shields on Lockheed’s spacecraft. As cool as those might be, Mars Base Camp relies on near-term technologies–equipment that’s already been proven or is in development now.

“All of these pieces exist today, they’re not brand new,” says Antonelli. “We’re taking advantage of what we’ve already got.”

Orion provides the brain of the vessel, providing navigation and communications. There’s also a backup Orion vehicle to ensure a getaway plan if the crew runs into trouble.

The two Orion capsules would link up with larger habitat and laboratory modules, which Lockheed is already in the process of developing, as well as solar panels to provide power.

The spacecraft would launch on the SLS in pieces, to be assembled in space around the moon. Solar electric propulsion, which NASA is currently fine-tuning, would pre-deliver non-essential elements, such as rovers or UAVs, to Mars orbit or the surface.

Later, modules could be added to allow astronauts to land on Mars and later return to the Base Camp for the return trip to Earth.

What Can You Do In Orbit Around Mars?

Mars Base Camp could put astronauts into Martian orbit for about 10 or 11 months straight. While they’re there, the astronauts could remotely explore Mars’ moons, Phobos and Deimos, as well as operate rovers or Unmanned Aerial Vehicles in real-time.

It can take about 20 minutes for a signal to travel between Earth and Mars. That means scientists on Earth who are driving rovers on Mars have to do so somewhat blindly, plotting the rover on a course and letting it proceed without immediate visual feedback. Without the delay, and with real-time feedback, scientists can stop to look at features that they might have missed otherwise. Plus, the use of flying robots would allow NASA to explore Mars in a whole new way. 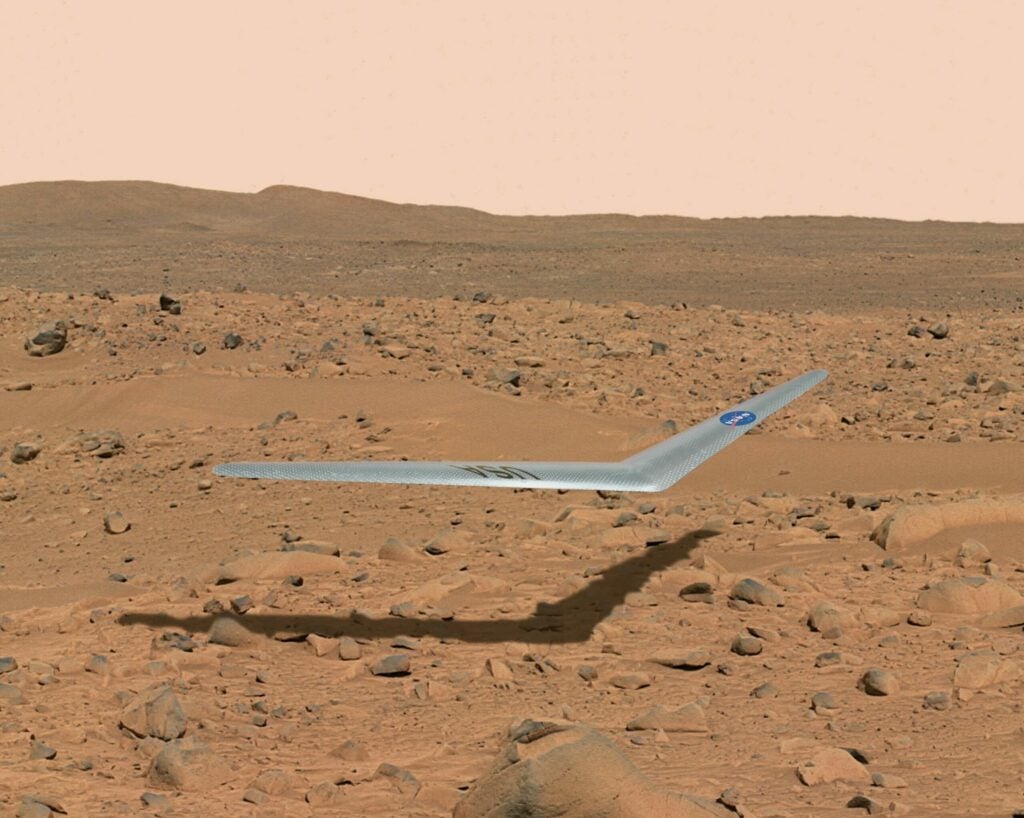 Concept drawing for a flying robot that could explore Mars. If NASA sends astronauts into orbit around Mars, they could remotely operate such robots in real time to find a safe landing place for the first Mars explorers.

The orbiting laboratory may help pinpoint a landing site for the first humans on Mars, and perhaps it will give scientists a chance to directly look for life on Mars: Lockheed suggests that soil samples from Mars could be launched up to the laboratory for a closer analysis than they could receive from a rover.

“We think that putting scientists with laboratories right there in Mars orbit will allow them, in just a few months, to accomplish more science than we’ve been able to accomplish in the past 40 years,” says Antonelli.

If NASA does decide to move forward with Lockheed’s Mars Base Camp idea, the company already has one astronaut who would gladly go into Mars orbit: Antonelli, who piloted two shuttle missions to the International Space Station in 2009 and 2010, says microgravity is addictive.

“When I was a child growing up thinking this would be a cool profession, this was the kind of mission that I thought about doing,” he says. “I thought, we’ve been able to send people to the moon, now the next generation–which I thought would be mine–was going to be on that journey to Mars.”

It’s been a long time coming, but Antonelli’s dream may finally be coming to fruition.