Rumors circulated last week, but now it’s official: NASA won’t be sending manned missions back to the moon any time... 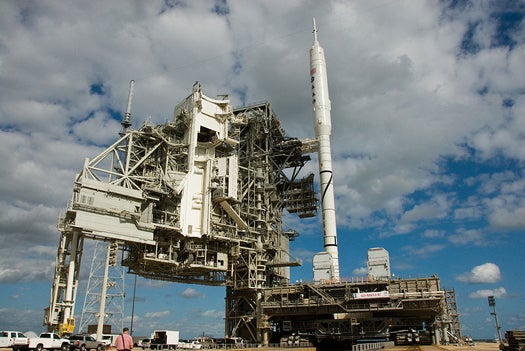 Rumors circulated last week, but now it’s official: NASA won’t be sending manned missions back to the moon any time soon. But in what may seem like a gutting of NASA moon- and Mars-based ambitions there is a silver lining: a $6 billion investment in helping private industry bring their space launch vehicles up to human-rated capacity and a smattering of modest robotic precursor missions to the moon, Mars, Martian moons or the Lagrange points that should set the stage for later manned missions far beyond low-earth orbit.

However, the Constellation program – and the $9 billion already spent developing its Orion crew vehicle and Ares rockets – is decidedly dead.

In a press conference Sunday, Office of Management and Budget Director Peter Orszag told reporters the White House is recommending Constellation be scrapped, turning the run-of-the-mill duties of shuttling astronauts into low-earth orbit over to private companies and shifting NASA’s focus to “”advance robotics and other steps that will help to inspire Americans and not just return a man or a woman to the Moon but undertake the longer range research that could succeed in human spaceflight to Mars.”

In a teleconference today, NASA Administrator Charles Bolden outlined the budget’s goals, emphasizing that while Constellation is getting the axe, NASA’s deep space exploration ambitions have not been curtailed, nor are they being fiscally undercut. Rather, NASA is reprioritizing, seeking more or less a five-year period of intense study on possible means toward future manned missions to deep space before embarking on a mission to the moon or beyond. Between now and fiscal 2015, the agency plans to fully utilize the R&D capabilities of the ISS, demonstrate better deep space flight technologies and fly some unmanned missions around the near solar system to scout out the most scientifically interesting targets for future manned exploration.

Those precursory missions to the moon, Mars and nearby asteroids might entail more tele-operated robots like the Spirit and Opportunity rovers on Mars, as well as a robotic lunar lander or asteroid mission that demonstrates an ability to utilize resources from remote outposts in space. These will be substantially cheaper than manned missions, generally less than $800 million each. But the thrilling prospect of a manned mission back to the lunar surface within the decade as envisioned in Constellation is more or less out of the question.

Highlights from the proposed NASA budget: