Up close with a big rocket 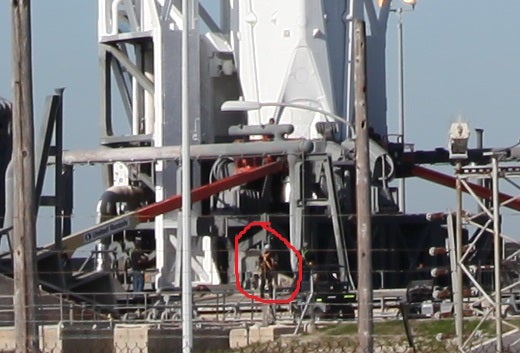 Did you see the man in the previous image? No? That's because he's tiny compared to the rocket. Sarah Fecht/Popular Science
SHARE

This is my first rocket rodeo. I’m here at Kennedy Space Center reporting on the SpaceX launch that’s scheduled for tonight, and I expected to be completely overwhelmed by the size of the rocket. I wasn’t, until I looked a little closer.

The rocket is a towering 23-stories tall, but by some trick of the eye, it doesn’t feel like it—at least not from behind the fence that keeps journalists from overrunning it. Maybe I’m just a jaded New Yorker. But the scale is also hard to grasp from the pictures. But there are a few tiny details that can put this behemoth into perspective.

Take the picture at the top of this post. Impressive, no? But the thing for me that made the size of this thing sink in was the little tiny people moving around at the base of the rocket. Here’s a zoomed in version:

Let’s see that again in the big picture.

But wait, there’s more. Did you see the landing fin? It’s the square grid thing near the top of the rocket that helps to steer the rocket as it’s hurtling back to Earth.

It looks tiny in the rocket photo, but it is also about the size of a human.

The Falcon 9 isn’t the biggest rocket ever made—that title belongs to the 363-foot Saturn V rocket that launched the Apollo astronauts to the moon—but it’s still pretty impressive. And it’s just one of many reasons why this afternoon’s launch attempt is a big deal. Watch it with us, starting around 4:30 PM Eastern!