The essential tools of an underwater researcher

Look at this trove, treasures untold 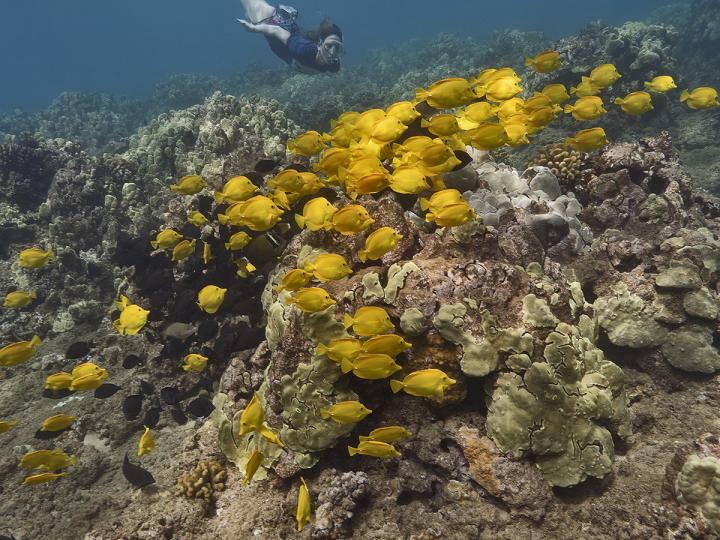 Among Hawaii’s reefs, Emily Kelly dives with surgeonfish and parrotfish. By grazing on fleshy algae, these “underwater lawnmowers” make room for hard corals to grow. To study how the fish aid the reef, and how to protect them from overfishing, Kelly uses this collection of gadgets and gizmos.

Kelly and her colleagues like to get their fish-gut specimens from local fishers when possible. But if they do go collecting, they rely on a Hawaiian sling-style gun with a three-prong spear tip.

The researchers preserve specimens on the way to the lab in an ice-filled cooler. A similar cooler holds snacks. The trick is remembering which cooler is which!

Scientists can’t exactly mark a fish’s street address. So they use a civilian GPS unit to track where they make observations and find specimens.

Kelly takes notes about what algae fish prefer, how they eat (nibbles versus chomps), and their roles in different ecosystems.

Parrotfish and surgeonfish sometimes graze on seaweed, which Kelly and her colleagues store like flower pressings. She displays some in her office, but they’re not just decorative: Kelly can always slice off a piece, rehydrate it, and examine its cell structure under a microscope.

Although the fish go to the lab for later study, Kelly and her colleagues use razor blades and forceps to dissect some specimens right in the field. First they remove essential organs and collect the ear bone, whose tree-ring-like structure can help determine a fish’s age. Then they take out the guts and slice them open before putting them into a vial of formalin, allowing the preservative to permeate the organs.

Forget about sharks—stray boats are a more threatening concern. To avoid accidents, Kelly’s team totes a float out to the water to mark their diving location.

Even in Maui’s balmy 75- to 80-degree waters, up to eight hours a day in the water saps Kelly’s body heat. A wetsuit keeps her cozy.

This article was originally published in the March/April 2017 issue of Popular Science, under the title “Look at this trove, treasures untold.”