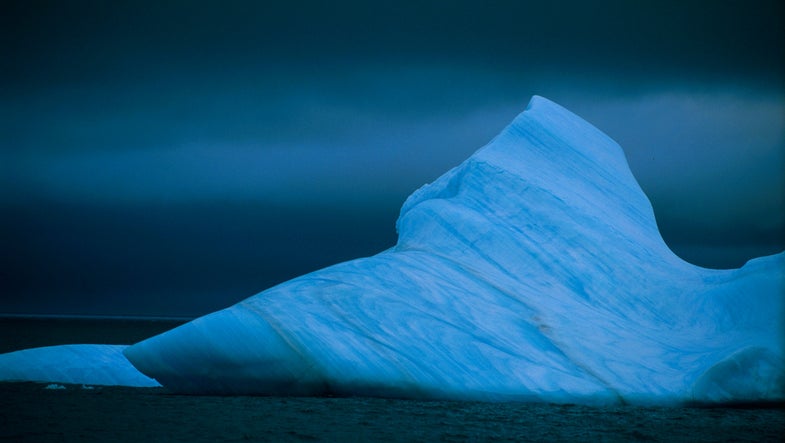 Nuclear waste is hot stuff. As mentioned in our Future of the Environment issue, Jessie Ausubel's tungsten spheres filled with nuclear waste could produce enough heat to bury themselves into rock (though the stability of the rock below would need to be known very well before such an option could be considered). Another idea from the "rejected back in the 1970s" annals: nuclear waste that burrows into glaciers. Place a sphere of nuclear waste in a stable ice sheet and it could melt its way down, the ice re-solidifying behind it. There are plenty of reasons this idea was rejected early -- not the least of which is that ice sheets move, a lot, so radioactive material could end up in floating in the sea as icebergs. winkyintheuk
SHARE

There is a swarm of about 481 icebergs parked in the shipping lanes of the North Atlantic right now, creating a hazardous area so treacherous that ships are having to detour 400 nautical miles out of their way to avoid the Titanic’s infamous fate.

The number of icebergs is unusual not only because of the large number but also because of the speed at which the icebergs gathered, and strange timing, early in the year.

“As of March 27 we had only tracked 37 icebergs into the transatlantic shipping lanes in the 2017 ice season. One week later, on April 3 we had 455,” says Coast Guard Commander Gabrielle McGrath, the head of the International Ice Patrol. “We’re now at 481 at this point.”

The International Ice Patrol (IIP) has records that stretch back to the early 1900s. McGrath says the average number of icebergs that have encroached into this area at the end of March is about 83. By the end of April that rises to 212—high, but not as high as we’re seeing now. Usually, this number of icebergs isn’t seen until the end of August, which averages a count of about 485.

The IIP monitors 500,000 square miles of ocean, keeping track of icebergs in the North Atlantic. The Patrol was set up in the aftermath of the Titanic disaster. In its 104 year history, no ship that has heeded one of the Patrol’s daily charts and warnings has collided with an iceberg. “We have had some issues with iceberg collisions, but that happened to ships that did not heed our warnings, and went inside the iceberg limit,” McGrath says.

“I have about a decade of experience with the Ice Patrol, and in my time here, and talking with people who have been here longer, I’ve never seen anything like this or heard of anything like this before,” McGrath says. A perfect combination of weather patterns set up the unusual iceberg influx that shipping companies are contending with today.

The icebergs we’re seeing actually started their journey years ago. It usually takes between one to three years for an iceberg to make its way from breaking off of a glacier in Greenland—a process called calving—to floating in the transatlantic shipping lanes at a latitude of about 48 degrees North. It takes so long because the icebergs don’t head straight south. Instead, McGrath says, they go north first—in the West Greenland current—then make a u-turn and head south again in the Labrador current.

Changes in the annual number of icebergs in shipping lanes are attributed to winter wind behavior off the coast of Greenland. In 2013, winds blew mostly towards the shore, keeping the icebergs away from the currents and close to the island. The onshore winds also compacted the sea ice, keeping it closer to shore as well. That year, only 13 icebergs made it to the shipping lanes. The next year, offshore winds dominated, creating a very different situation.

“Typically if you have offshore winds throughout the winter months, that will allow the sea ice to grow far off the coast,” McGrath says. “That sea ice will form around the icebergs and will protect them from deterioration by the waves. That allows them to drift much further south and east.” In 2014, 1,546 icebergs made it into the shipping lanes.

While winter weather can play a huge role in dictating the annual supply of icebergs for a year, it’s spring that really provides the extra push that sends the icebergs on their way. Storms and warmer weather break up the sea ice, freeing the icebergs from their chilly cocoon.

In this case, a storm off Newfoundland in mid-to-late March broke up the sea ice. Then, a massive storm with sustained hurricane force winds moved through the area near Newfoundland between March 27 and 29. “Those counterclockwise winds really pulled the icebergs to the south and into the shipping lanes,” McGrath says.

Eventually, the icebergs will meet their end. They’ll keep moving with the winds and the currents, slowly breaking down. A storm with high waves (like the one that released them in the first place) would destroy the icebergs even faster. “The waves are the highest deteriorating factor in an iceberg,” McGrath explains. Waves hit icebergs right at the water line, battering them until they break down into smaller pieces. But until then, ships will need to keep their distance.

Icebergs are a problem for shipping companies, because this area is the main shipping route between Europe and North America. It’s currently the fastest route to ship goods by sea between the two areas, but the icebergs mean that shipping companies have to go 400 nautical miles and at least a day or two out of their way in order to stay safe. That takes up valuable time—and valuable fuel. But in the end, there’s really no other choice.

No one wants a sequel to Titanic.