It turns out the oldest seafaring ships ever found actually work 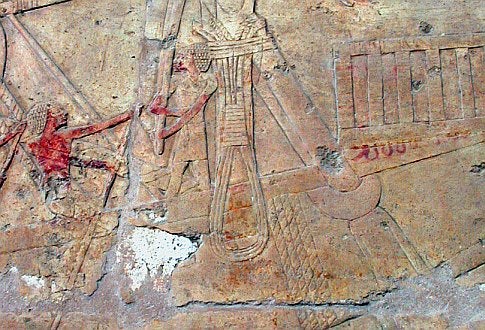 An archaeologist who examined remnants of the oldest-known seafaring ships has now put ancient Egyptian technology to the test. She teamed up with a naval architect, modern shipwrights and an on-site Egyptian archaeologist to build a replica 3,800-year-old ship for a Red Sea trial run this past December.

The voyage was meant to retrace an ancient voyage that the female pharaoh Hatsheput sponsored to a place which ancient Egyptians called God’s land, or Punt. Ship planks and oar blades discovered in 2006 at the caves of Wadi Gawasis provided a basis for the ship reconstruction.

“The planks that we looked at from the archaeological site are in great condition,” said Cheryl Ward, the maritime archaeologist at Florida State University who headed the effort.

Click here to see photos and more details about the ship’s birth and maiden voyage.

The nearly 4,000-year-old timbers even contained shipworms which had tunneled into the ships during sea voyages, leaving behind tube-like shells that filled up the wood like a sponge. Ward was able to estimate from the shipworms that the ship endured a six-month, 2,000-mile round trip to Punt — located in modern Ethiopia or Yemen.

A French production company called Sombrero and Co. approached Ward with the idea of recreating the ancient journey for a documentary, and so her team set about resurrecting a ship for the modern expedition.

The 66-foot-long by 16-foot-wide ship was completed by October 2008 using ancient Egyptian techniques. Frames and nails didn’t enter the equation — instead planks were designed to fit like pieces of a puzzle. The timbers swelled snugly together after being immersed in the Nile River.

A 24-person international crew eventually took Min of the Desert on its maiden Red Sea voyage, after short trial runs on the Nile. Political considerations and the threat of modern-day pirates cut the voyage short after sailing 150 miles in a week, but the ancient Egyptian engineering held up.

“The technology we used had not been applied to shipbuilding for more than 3,500 years, and it still works as well today as it did then,” Ward said. 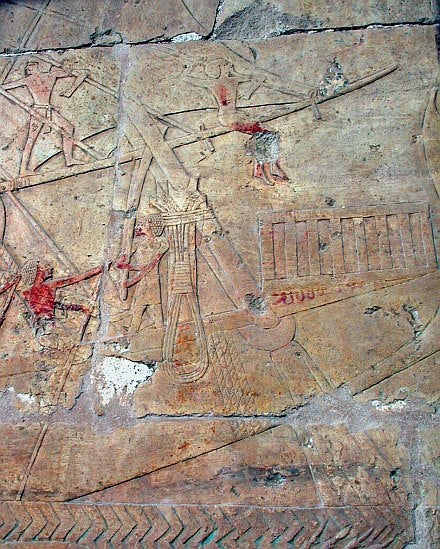 A stone relief from Hatshepsut’s temple shows the quarter rudder of an ancient Egyptian Punt ship. Archaeologists and ship designers based their replica ship design on historical images as well as artifacts from the caves at Wadi Gawasis.

Naval architect Patrick Couser based the design of Min of the Desert on the ship components found at Wadi Gawasis, as well as the dimensions of an ancient Egyptian “Dashur” boat. By doubling the dimensions and curvature of the “Dashur” boat, Couser produced a design that fit the profile of the Punt ships in Hatshepsut’s temple. 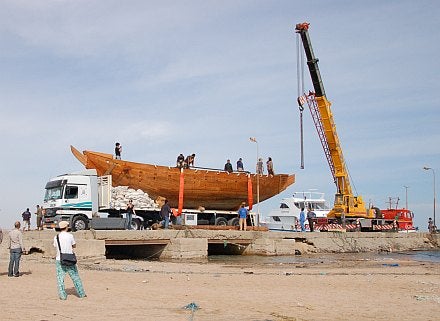 The ship was built at Hamdi Lahma & Brothers Shipyard in Rashid (Rosetta), Egypt. A truck then transported the completed vessel to the Red Sea, rather than abiding by the ancient Egyptian practice of carrying it piece-by-piece across the desert. 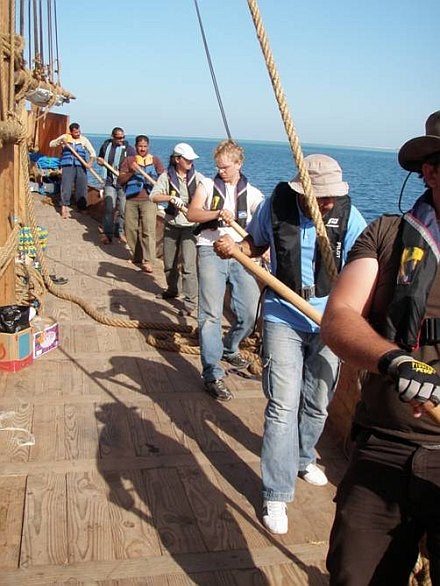 “When it was time to raise the sail and point our bow south toward the land of Punt, we had only our crew and human energy to rely on,” Ward said. “Whether standing and rowing over the rail, hauling on a line to hoist the sail without the help of pulleys or keeping track of our progress along the shore, we all felt connected to those ancient sailors on their epic voyages.” 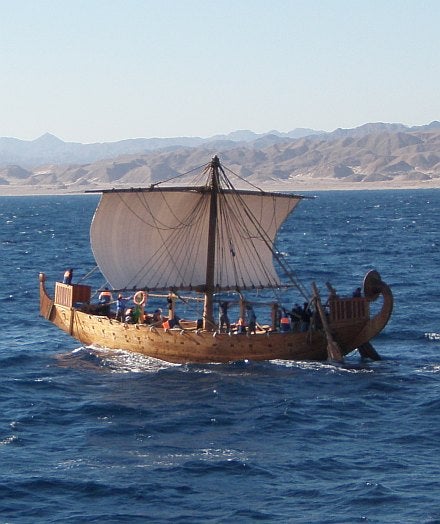 Min of the Desert sailed past the ancient pharaonic harbor at Mersa Gawasis, located on the Red Sea coast of Egypt. Ward joked that some of the more experienced sailors were ready to sail on to Panama. 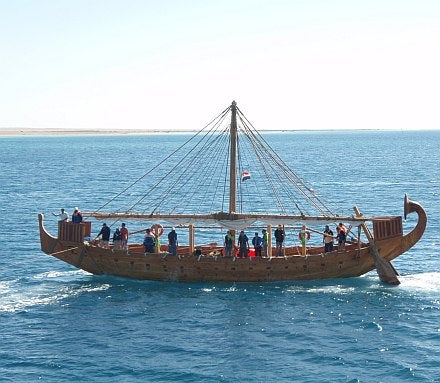 The replica ship managed an average speed of 6 knots over a two-day period, and at one point achieved burst speed of 9 knots. “Even though seas were incredibly rough and we corkscrewed through them sometimes, it was very relaxed,” Ward said.
Archaeology
Vehicles
alt vehicles
ancient egypt
Asia
egypt
history