In the face of climate change, experts are giving up hope. 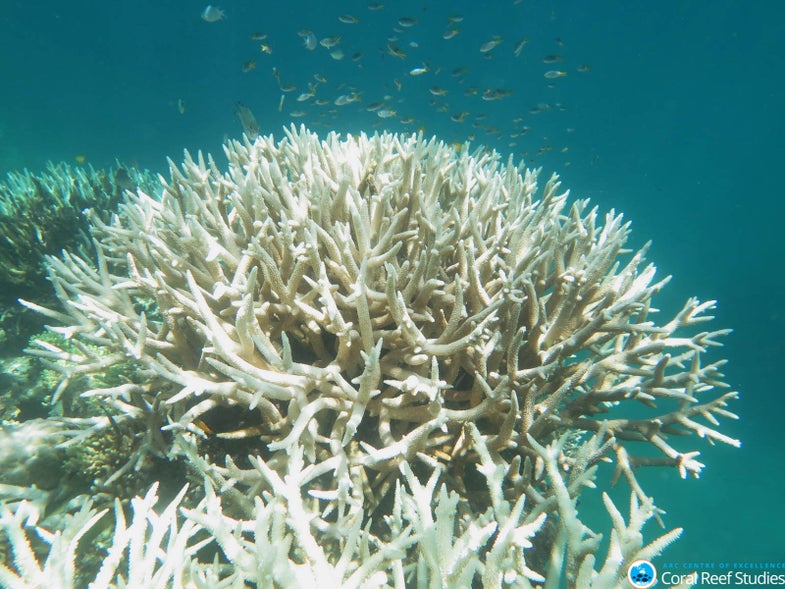 If you’ve never seen Australia’s Great Barrier Reef, now you never might. At least not alive. Less than a month ago PopSci reported that the Great Barrier Reef had experienced devastating bleaching in 2016 and was in the midst of a second bleaching event. Data from the 2017 survey is in and the results mirror the condition of the reef—they’re bleak.

For the second year in a row, two-thirds of the reef—more than 900 miles—have bleached, according to an announcement made on Sunday by the ARC Centre of Excellence for Coral Reef Studies at Australia’s James Cook University. This is particularly startling since 2017, unlike 2016, was not an El Nino year, meaning the waters should have been cooler—ideally cool enough to avert another bleaching event.

I don't know how much longer the #GreatBarrierReef has without COP21 +1.5C, and it saddens me deeply that people need to ask the question… https://t.co/Z7c6vgfS6D/

The announcement has some calling the reef’s condition terminal, though Terry Hughes Director of the ARC Center, noted on Twitter “Hopefully, not terminal. But time is certainly running out with 4 bleachings now in just 19 years……”

Ordinarily, coral are brightly colored because of algae, called zooxanthellae, that live in their tissue. It’s a symbiotic relationship. The coral provide the algae shelter and compounds that they need for photosynthesis, and in exchange the algae help the coral remove its waste, and provide it with oxygen and, most critically, nutrients in the form of glucose, glycerol, and amino acids—the byproducts of photosynthesis. These help coral grow, albeit slowly. Depending on the type of coral, coral grows as little as a .1 inches a year, meaning a dead reef will not bounce back within any of our lifetimes.

“It takes at least a decade for a full recovery of even the fastest growing corals, so mass bleaching events 12 months apart offers zero prospect of recovery for reefs that were damaged in 2016,” said James Kerry a senior research officer at ARC who worked on the survey in a press statement.

When the algae are stressed—from warming waters for example—they abandon the coral, leaving it to fend for itself. A bleaching event does not mean that a reef will automatically die. If the waters revert to cooler temperatures, the coral can make a go of it and the algae may eventually return. But it makes things much harder for the coral, and back-to-back bleaching events are a bit like kicking the reef when it’s already down.

“The thing you have to bear in mind is, prior to human-induced warming of the Earth’s climate, bleaching was only ever a very localized and short-term event,” Sean Connolly, an associate professor at Australia’s James Cook University and a part of the ARC Center of Excellence Coral for Reef Studies located at the university told PopSci last month. “You might get a bit of localized bleaching in a lagoon if there was an extreme low tide, and the water was sitting there for a long time, and it was hot and the sun was shining. Mass bleaching, bleaching on very large spatial scales, was unprecedented until it was first detected in the second half of the 20th century. There’s no evidence that mass bleaching was happening before detectable warming of the Earth’s climate that the models attribute to greenhouse gas production. Mass bleaching is a consequence of climate change.”

The loss of coral reefs has a direct negative impact on human wellbeing. Coral reef ecosystems create the foundation for fish that we depend on for food, or barrier that we depend upon for storm protection. The lives of an estimated five hundred million people are dependent upon living coral reefs either in the form of coastal protection, food, or tourism income. And we’re killing them.

The modern form of the Great Barrier reef is more than 8,000 years old. It’s taken less than two centuries of human influence on the climate to bring it to the brink of death.