Wars of future past. 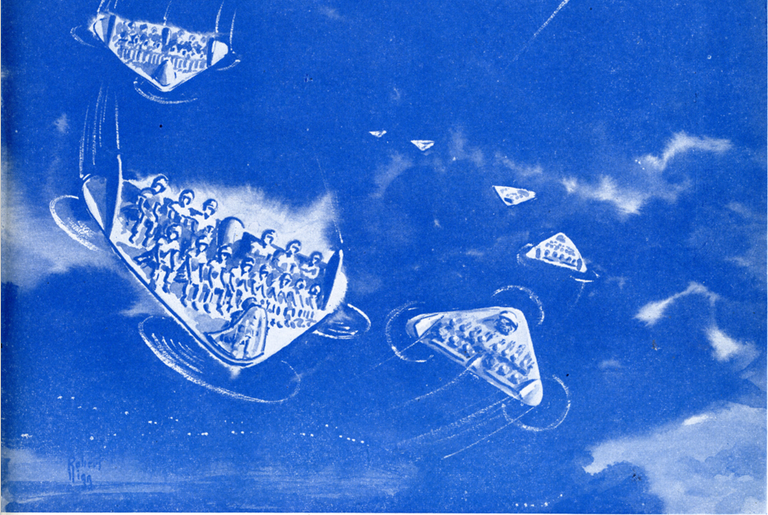 Soldiers and Marines today travel by helicopters instead of flying triangles, but the concept for how they fight remains similar. Robert B. Rigg, ARMY Magazine
SHARE

The first half of the 20th century saw war unlike any that had transpired before. Elements were the same: people still fought over ideas and land, and it was still infantry on foot and civilians that did most of the dying. But the weapons! Fantastical, horrific weapons, like the machine guns that turned trench warfare from protracted stalemate to meat grinder, and fighters and bombers that burned through the skies. Or the armored tanks, which lumbered into history in the Western Front and then defined history from 1939 to 1945, changing centuries of prior thinking on how best to seize victory. From the vantage point of the middle of the 20th century, the coming decades of war seemed almost certain to be a new bloody spectacle, powered by technological marvels.

We have a prescriptive document from that era, just into the second decade of the Cold War, imagining exactly what future wars will looks like. This snapshot is “Soldier of the Futurarmy,” an essay published in the November 1956 issue of ARMY, a magazine from the Association of the United States Army. Its author was Robert B. Rigg, a Lieutenant Colonel in the U.S. Army who was sent as an observer to watch Soviet forces in World War II and as an advisor to the Nationalist army in China in 1947. “Futurarmy” doesn’t appear to draw much from either of these experiences, except for when it envisions one foe of the future as communist guerrillas. Instead, “Futurarmy” is a direct look into ways war might change, written specifically for an audience familiar with modern war. And, taken as a whole, it serves to answer one big, unsettled question: is there still a place for infantry in a nuclear war?

Yes, Rigg answers enthusiastically, and devotes the rest of his story to explaining exactly how infantry fit into tomorrow. Key to this will be modern technologies, and Rigg is fast to propose them; there are at least 80 different new machines, vehicles, weapons, rations, and other pieces of equipment invented entirely for this future vision. Yet the heart of the soldier remains the same: it is still a person, wearing effective but lightweight armor, carrying a gun into battle. Some of those technologies are realized today: while Rigg imagined a medieval-inspired helmet with special visors for night vision or telescopically looking at a distance, modern soldiers have infrared and night-vision goggles they can wear over their modern helmets, giving the same advantages. Others are more fantastical, like the ten-inch “foxhole digger” bazooka like-contraption, which a soldier could use to dig himself a safe spot in a moment’s notice.

And then there is the question of tactical nuclear weapons. 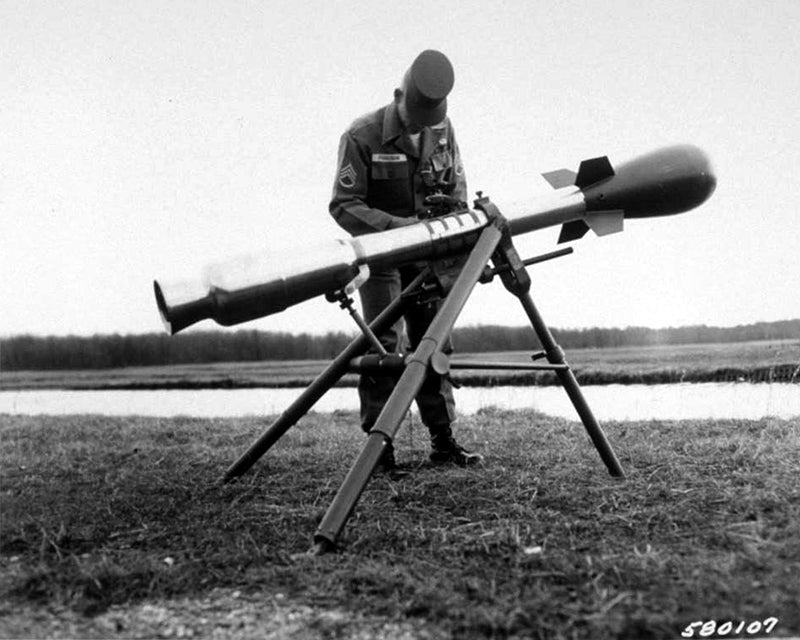 The Davy Crockett was the smallest nuclear weapon ever fielded by the United States.

“The only thing [Rigg] got wrong in a tactical concept sense is that we would use nukes in a tactical way,” said Brett Friedman. Friedman is veteran, who now works as a civilian wargame analyst at the Marine Corps Warfighting Lab. His new book “On Tactics” examines continuity between how battles are fought over centuries. (And, in the interest of full disclosure, Friedman and the author co-founded Grand Blog Tarkin together). “A lot of people in the 1950s though that we would use nukes the way we use artillery.”

At the same time that Rigg argued that the infantryman still had a role on the battlefield, he had to contend with the growing nuclear arsenals in the world. The only nuclear weapons ever used in war were bombs, designed to blow up in a big way and annihilate cities in a single blast. In the late 1940s and throughout the 1950s and early 1960s, American military planners explored much smaller nuclear weapons, like the jeep-mounted Davey Crockett to see if a sudden deadly burst of radioactive death and fallout was the specific punch they needed to win a seemingly inevitable land war in Europe. No country has used a nuclear weapon in battle since August 1945, but for decades it appeared as a near-certainty that it would happen again, and with some regularity.

To get around these new and deadly radioactive hotspots, Rigg looks to a plethora of aerial vehicles, everything from nuclear-powered airborne aircraft carriers to light flying platforms transporting 15 soldiers and a driver at a time. Swarms of these platforms would move across a target country in a sort of “aerial blitzkrieg,” seizing airfields and taking over or destroying missile silos, and then retreating when enemy reinforcements arrived. While the Army is still working on hover cars (like it has been since the 1950s), there was another machine that could do the job, and had, by the time Rigg put together “Futurarmy”: helicopters.

“Marines started experimenting with helicopters right after World War II, and executed first vertical envelopment in history in Korea in 20 September 1951,” said Friedman, referring to the use of helicopters to move Marines around the enemy in Operation Summit. Helicopter maneuvers in Korea may have been on Rigg’s mind as he wrote “Futurarmy,” but it’s Vietnam that showed the true utility of transporting troops by the sky and then putting them on the ground.

“In Vietnam, both the Army and the Marine Corps used vertical envelopment as their tactic of choice,” said Friedman. “It was easier to get around Vietnam in a helicopter than in a convoy of trucks, or armored column, or even foot. [Rigg] was right that we started to use technology to assist the mobility of our forces, and the army especially ran with that in Vietnam.”

Part of Rigg’s vision for the soldier of the future was fighting alongside a whole, combined arms invading force, with infantry backed by supporting fire from close-by rocket launchers to long range ballistic missiles. Flying overhead would be the Centaur, a sort of “aerial artillery,” a kind of fighter plane focused entirely on blowing up targets on the ground, at the behest of the infantry. 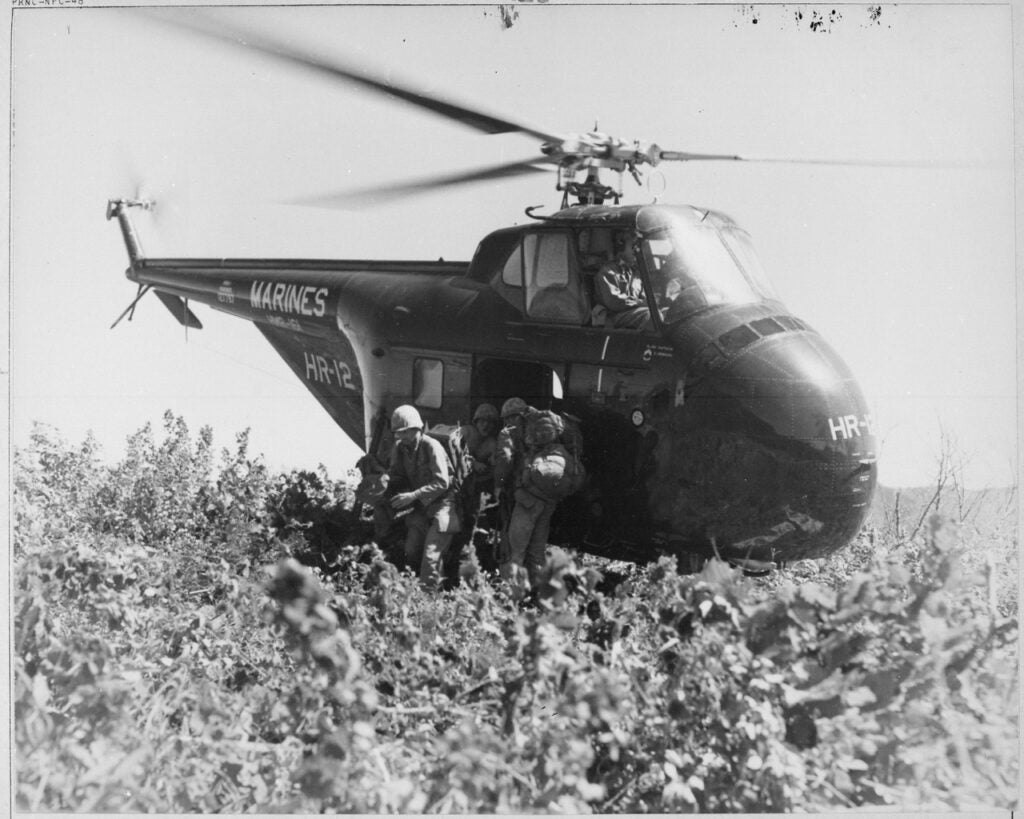 Taken on September 20th, 29151, this photograph shows Marines taking Hill 812, believed to be the first use of helicopters for a “vertical envelopment.”

“He got the idea of close air support exactly right,” said Friedman, “once the technology got to where troops on the ground could talk to the pilot in the aircraft via radio, that’s when you saw the coordination between the two, leading to his vision of aircraft supporting ground troops. He got the technology a little weird with his Centaur, but the modern Centaur is the A-10 warthog. It is flying artillery.”

The A-10 is a plane originally designed to hunt tanks in Eastern Europe, should the Cold War ever turn hot. While that war has yet to come to pass, the A-10’s massive gun and heavy payloads of explosives have served it well in battles from Iraq to Afghanistan to Libya, as it does essentially the same job of artillery: put a deadly explosive on a target beyond the reach of the weapons carried by infantry. In the immediate decades after, this role would be taken up by attack helicopters, and today the role of shooting things from the sky at the request of infantry is shared by everything from the AC-130 gunship to the AH-1 SuperCobra helicopter.

Rigg even imagined something like the drones of the future battlefields, writing about mechanical sentries recording troop movements and transmitting them by radio, or small flying bird-like robot scouts that can tell soldiers where enemies are nearby. Yet there is much Rigg gets wrong, from emergency rations condensed into flakes the size of a fingernail, to a general trend that equipment would be light enough that soldiers could travel into battle unburdened with heavy packs. And it all takes place in the context of massive superpower wars, with tactical nuclear weapons blasting around, a development fortunately not yet seen.

So what are we to make of this strange vision of the wars of tomorrow? As much as we are to make of modern insurgent groups boasting about reinventing century-old weapons: ideas about war are products of the technologies and tools of their time, but the general thrust of history is still people, with weapons they can carry, trying forever to attack enemies at their weakest.

Still, given that war both always changes and never changes. Friedman offered his own guess at what new, strange sight we’ll see on the the next decades battle