Are ultra-long airplane flights bad for your health? 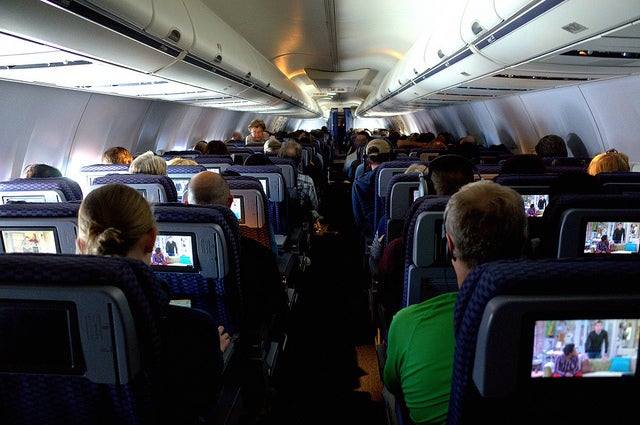 Currently, the world’s longest commercial flight takes seventeen and a half hours. It connects Auckland, New Zealand to Doha, Qatar, and was only introduced in February. It probably won’t be long, though, before this record is usurped. Nineteen-hour flights from Singapore to New York and twenty-hour treks from Sydney to London are expected to join the fray soon.

These ultra long-haul flights are becoming more efficient and economically viable. They’re also a slog for passengers. But is there a point where a super-long flight becomes a public health risk?

There are a few health risks linked to flying (yes, aside from being dragged off the plane. Or stung by falling scorpions). Tacking on a few more hours probably won’t have much of an impact, though.

“If it’s one seventeenth of the trip, it’s not that big of a deal,” says Fanancy Anzalone, an aerospace medicine physician and past president of the Aerospace Medical Association. Still, he says, “There’s a multitude of things that you need to be concerned about when you do go on a long-haul flight.”

Sitting still in a cramped seat for hours isn’t just unpleasant—it can lead to deep vein thrombosis, when blood clots form in the legs because of poor blood flow. The longer you don’t move, the greater your risk. Worst case scenario, the clot can break free and lodge in the lungs. Fortunately, this is rare. And you can cut down on your risk by getting up and walking around or flexing your legs.

Passengers “really need to think about getting up anywhere between three to four hours and walk around,” Anzalone says. “But by sitting on your chair and just pumping your legs—in essence pressing down on your heels and up with your toes—that little bit can make a big difference in whether somebody is going to have a [deep vein thrombosis].”

It also helps to stay hydrated—which means avoiding the very drinks you’re most likely to reach for on a flight. Soft drinks, booze, and coffee are all diuretics, meaning that they make you pee more. “If you are going on a long haul it’s recommended that you start [hydrating] the day before,” Anzalone says.

The superdry air on a plane can make it easier to get dehydrated. It also dries out your mucus membranes, which keeps them from trapping germs. Which is unfortunate, because there is always chance you’ll catch a cold or worse from your fellow passengers. “As each hour goes by you have a little more exposure, and so therefore the probability of catching a cold on a flight like that grows,” Anzalone says.

So you might be out of luck if you’re seated next to someone who is already ill. However, the idea that the recirculating air on a plane abets disease transmission is a myth. “Airflow and circulation of cabin air is quite sophisticated technically, so there is usually no high risk of getting infected even if you have someone [sick] sitting two rows before,” says Jochen Hinkelbein, a professor of anesthesiology at the University of Cologne in Germany and president of the German Society of Aerospace Medicine .

You should be more concerned about the tray tables, bathrooms, and other germ-gathering surfaces you’re likely to come into contact with. They do get wiped down after flights. “The major airlines that are flying long-haul in my experience do extremely well in making sure that he airplane is as clean…as possible,” Anzalone says. But he does recommend traveling with hand wipes or sanitizer. Really, it’s best to touch as little as possible.

There’s not much you can do about the cosmic rays, though. Each time a passenger flies, they are exposed to a tiny amount of radiation from space. “The more time you’re on the plane, the more radiation exposure you’ll get,” says Steven Barrett, an aerospace engineer at MIT.

Pilots and other flight crewmembers do spend enough time in the air that the Centers for Disease Control and Prevention considers them radiation workers. The agency recommends they try to limit their time on flights that are very long, fly at high altitudes, or fly over the poles.

Another concern is that the air pressure is also lower on a plane than it is at sea level. This doesn’t bother most people. However, the thin air can cause problems for those who are old or have heart conditions or other pre-existing illnesses.

Ultimately, the longer a flight is, the more time you have for something to go wrong. And planes have become larger in recent years, which also increases the probability that someone on board will have a medical emergency.

“Traveling itself is becoming more and more popular, more and more convenient even for the old ones with…pre-existing diseases,” Hinkelbein says. “So we have an…unhappy triad which is the setting is not ideal for unhealthy persons, the persons are older and older and having more pre existing diseases, and not moving within the aircraft cabin, drinking only a little bit.”

There’s no specific amount of time that is unsafe, and it depends on the individual traveler. “But my feeling is below 12 [or] 14 hours, you can nearly send everyone, if it’s longer you should be a little careful,” Hinkelbein says.

About half of the medical issues that do crop up on planes are cardiovascular troubles such as fainting or dizziness. Estimates for how often people have in-flight medical emergencies vary, ranging from one passenger in 10,000 to one in 40,000.

For these crises, planes come equipped with medical kits and equipment such as defibrillators. “Every one of the long-haul flights have a way by radio to connect to physicians that are available around the world to talk to them,” Anzalone says. “I have talked to pilots about medical issues that are on board and how to handle it, do you divert or not divert.”

For the vast majority of people, though, even the longest flights will pass uneventfully. “The flying public on major airlines is very safe,” Anzalone says.

In fact, a plane’s most profound influence probably isn’t on the passengers—it turns out that airplanes cruising miles above the Earth’s surface can cause problems down below.

“The main health impact is probably emissions that come from them and the health impacts for people for the ground,” Barrett says. He and his colleagues have estimated that 16,000 people globally die each year because of air pollution caused by planes. These emissions, which are linked to lung cancer and cardiopulmonary disease, came from planes at cruising height as well as those in the midst of takeoff and landing.

But ultra long-haul flights may actually spew less harmful pollution than routes that include stopovers. “From a human health perspective the direct flight would be better,” Barrett says. “Even though the high-altitude emissions do affect human health on the ground, the low altitude emissions at airports when the airplanes take off and land and taxi are still more impactful because they’re closer to where people live.”

One of the more radical ideas to cut down on plane-related pollution is to use electric aircraft, which would release no emissions while flying. Unfortunately, however, the longest flights are unlikely to be good candidates for this technology.

“Electric aircraft might be possible for shorter ranges, maybe up to 1000 or so miles, but it looks much less likely that electric aircraft could contribute in a meaningful way for ultra long-haul flights,” Barrett says. “That’s where there’s no obvious or no real solution on the horizon.”