How drone swarms could help protect us from tornadoes

Eyes in the sky 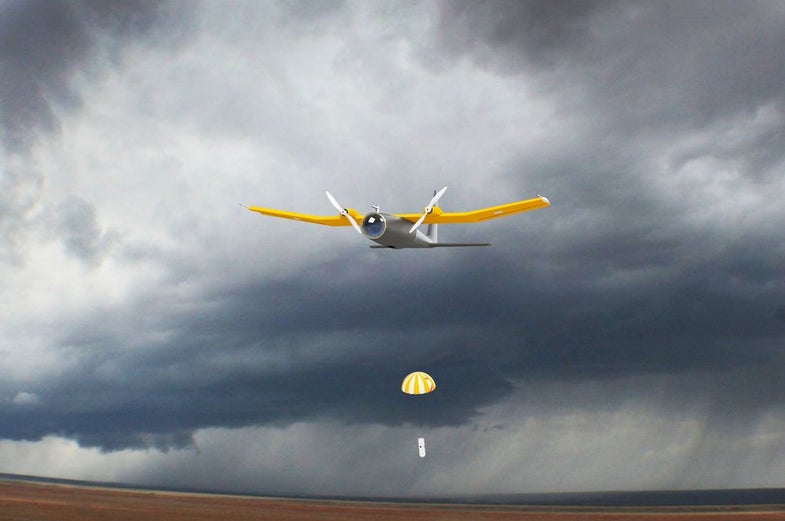 Tornadoes tore through much of the Midwest and Southern U.S. this weekend. More than a dozen people were killed, and the trails of destruction stretch from Texas to Maryland.

Tornadoes aren’t just dangerous because of their sheer power: they’re also extremely difficult to predict. On average, weather monitors give us only 13 minutes’ notice to take cover. But mechanical engineer Jamey Jacob from Oklahoma State University hopes to extend the warning time to an hour or more. He and his team are developing rugged drones that can collect data from these violent storms.

Whereas we can see hurricanes and blizzards coming from miles away, tornadoes form very quickly and on smaller scales. Predicting them requires very detailed understanding of atmospheric processes at a resolution that you can’t get with weather radar.

In the future, Jacob envisions meteorologists flying drone swarms into severe weather to measure the temperature, pressure, and wind velocity at specific points throughout the storm. Fed into a computer model, this information could indicate whether a thunderstorm is likely to turn into a tornado. And the storm chasers could collect all this data from a safe distance.

Storm chasers currently use some sensor packages that can collect data from inside the storm, but these tools are limited. Weather balloons and TOTO sensors dropped in the path of the storm depend on chance to collect useful data. “Once dropped, they can’t move and thus are subject to the unpredictable nature of a storm,” says Jacob. Unmanned Aerial Vehicles (UAVs), on the other hand, are steerable and can give a fuller view of the storm.

But drones can’t do a thing to improve forecasts if they can’t survive a storm. Jacob’s team is developing ruggedized UAVs that can withstand rain, hail, and winds of up to 120 miles per hour. These sensor- and camera-laden aircraft are made of lightweight and strong composite materials, similar to Kevlar bullet-proof vests.

One system, named MARIA (Mesocyclone Analysis Research & Investigation Aircraft) can even release dropsondes—little parachuted sensors that can collect data about the vertical profile of a storm as they fall. Others fly in swarms to collect multiple data points at once.

To get longer-term tornado predictions, we’re also going to need better tornado models—because tornado formation is still a mysterious process. Some temperature and wind flow patterns can cause tornadoes in some situations, but they don’t always.

“A large variety of weather patterns can lead to tornadoes,” notes NOAA’s Storm Prediction Center, “and often, similar patterns may produce no severe weather at all.”

Storm-proof UAVs could give weather forecasters new views into developing storms, tracking more variables at finer scales, to provide valuable information about why some systems turn into tornadoes and others don’t. These improved models, in turn, will turn the drone-collected data into more accurate tornado warnings.

For now, Jacob and his team are still working on the technical difficulties. Their drones aren’t usually ready to fly into a storm at a moment’s notice—it takes about four hours to prep—but the team does occasionally encounter storms while they’re out in the field, and they use those opportunities to test their craft. Other times, they’re met with crashing computers, miscalibrated sensors, or drone flying restrictions that limit their data collection.

“Eventually what we want is to get to a point where you’re watching the weather channel,” says Jacob, “and they’re reporting data that they’re getting from the drones, and nobody cares—it’s just the data that’s coming in. But we’re still really far away from that.”