No, Drones Are Not ‘Useless’ In Most Wars

Air Force Gen. Mike Hostage says drones are worthless in contested airspace. They are, but here's why that doesn't matter. 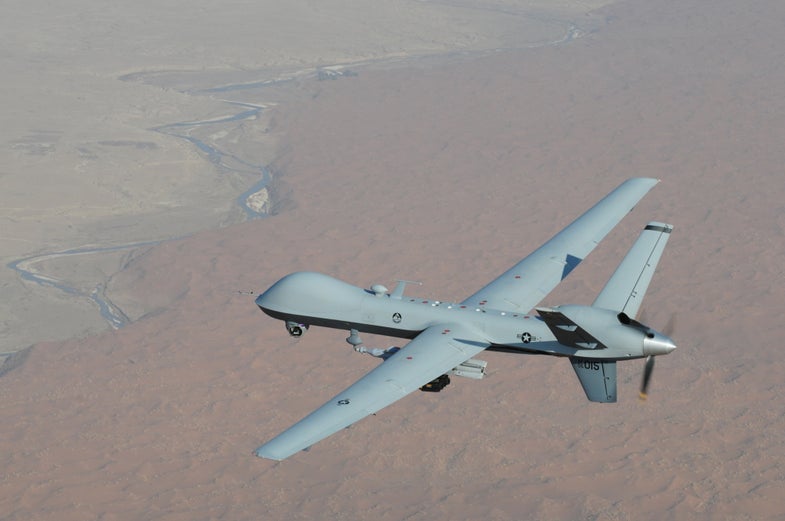 At an Air Force conference near Washington DC this week, Air Force Gen. Mike Hostage claimed “Predators and Reapers are useless in a contested environment,” and emphasized a need for the Air Force to move away from the iconic drones that came to symbolize the war in Afghanistan. Hostage specifically cited the anti-air weapons of China and Iran, and went further, noting “the smallest, weakest country with the most minimal air force … can deal with a Predator.”

He’s not wrong, but drones were never supposed to be invulnerable. They were supposed to fly where vulnerability didn’t matter much.

Predators and Reapers are designed for what’s termed a “permissive” environment—basically anywhere that doesn’t have the capability to shoot them down, or for political reasons chooses not to. The United States actually fights most of its wars in places like Afghanistan (and formerly Iraq), where America and her allies command the skies, or countries like Yemen, Somalia, and Pakistan, where the official government doesn’t mind the U.S. attacking hostile local insurgents. Insurgents, it turns out, don’t usually have the kind of weapons that are good for shooting aircraft out of the sky. Sometimes, an insurgent group like al Qaeda in the Arabian Peninsula can get small, portable, anti-air missiles, but those can be intercepted in transit. Afghanistan’s Taliban scored their biggest success against aircraft when they blew up eight Harrier fighters on the ground at a base they infiltrated. Those are risky attacks, and while they can stop the occasional a drone, they can’t really clear the sky of them.

Drones, with their ability to fly high, watch vast stretches of sparsely inhabited space, and track small groups of individuals, are a great counter-insurgency tool. Multiple pilots can steer a drone over the course of a 28-hour flight, with fresh eyes scanning for unusual activity, and in the midst of a firefight drone pilots can relay what they see to the soldiers on the ground, giving them the edge in information. Drones will do this less-often once the U.S. withdraws from Afghanistan, but the need for a supporting eye in the sky watching violent militias that can’t shoot them down, will likely remain.

The specific instance Hostage cites as a sign of Predator and Reaper drone weakness (a flight over the Strait of Hormuz that Iran contested with an F-4 fighter) isn’t the kind of environment drones were designed for, and it’s only through providence or a long, unbroken stretch of luck that drones have worked in that environment before. Predators and Reapers were never designed as all-purpose surveillance tools. Instead, they are a niche weapon, whose niche happens to be not all war, just the kind of war America spent the last decade fighting.

The fault here lies not with the tools, but with an assumption that the tools were all-purpose. It’s like America thought it had a Swiss army knife and is only just now realizing it’s actually just a spork. Fortunately, a spork is a much better alternative to eating soup with a knife.