But they're between five and fourteen times cheaper 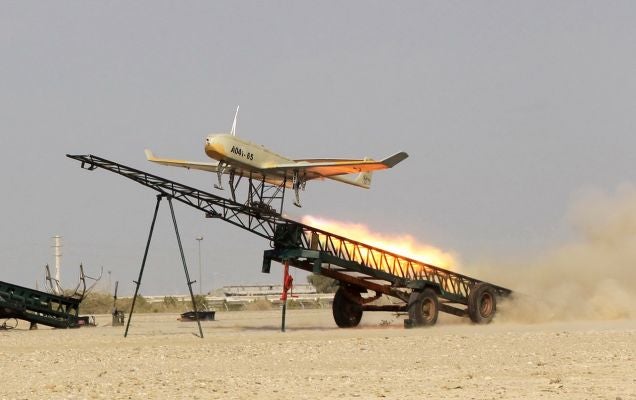 Iran’s new suicide drone bomb is a wedding of unmanned technology and cruise missile utility. In the tradition of a wedding, the drone’s Yasir-style body is borrowed, as it’s a derivative of captured American ScanEagle drones. There’s also something old: the concept of remotely piloted bombs is almost as old as flying itself. And together, they pose a very new threat that is a hodgepodge of the past, made especially deadly only through the economics of the present. The suicide drone provides strictly worse performance than a cruise missile, but it’s also loads cheaper. And that’s enough to make enemy ships blue.

Demonstrated in exercises near the Strait of Hormuz last week, Iran’s new flying bomb is probably a variant of the Yasir drone. (Iranian media has referred to the drone as both a Yasir and a Raad-85.) The location is significant: The Strait of Hormuz is the narrowest part of the Persian Gulf, and is a major shipping route for oil. Not coincidentally, the United States currently has a ship in the Persian Gulf armed with a laser gun that it has tested against drones, including a ScanEagle.

This modified Yasir is hardly the first fusion of explosive delivery and a one-use airframe. Cruise missiles and drones share a common ancestor: World War I’s Kettering Bug. The war ended before the bug saw use, but it was an unmanned biplane that would fly a preset distance and then dive downward, exploding on what was hopefully its target. Since the Kettering Bug, drones developed as reusable fliers and early cruise missiles, like the German V-1, took on the role of single-use flying attack bombs.

Converting a drone to a guided flying bomb makes the weapon meaningfully different from a cruise missile in a few significant ways. A major one is performance: A ScanEagle drone has a small payload of only a few pounds and it’s much slower than normal missiles, which means an enemy will have an easier time stopping a suicide drone than a speeding rocket. Another change is flight time. The converted drone-bomb can fly for 15 hours (if it has similar flight duration to that of its predecessor) meaning a pilot could keep one airborne over a sensitive area like the Strait of Hormuz before attacking with it.

Finally, there’s a matter of cost: Tomahawk cruise missiles, the kind used by the U.S. Navy, cost between $1,400,000 for old models and $569,000 for newer ones. By contrast, ScanEagles cost only $100,000, meaning that for the cost of every top-of-the-line cruise missile Iran could afford, it can get between five and fourteen times as many suicide drones. That’s a lot of firepower to throw at a ship.

Iran can’t buy American ScanEagles or Tomahawk cruise missiles, but the cost ratio between the cheap converted drone bomb and the smart missile is likely similar. So even as Iran develops its own cruise missiles, it can threaten ships with a bargain-basement remote-controlled flying bomb.