How to turn a spinach leaf into a human heart 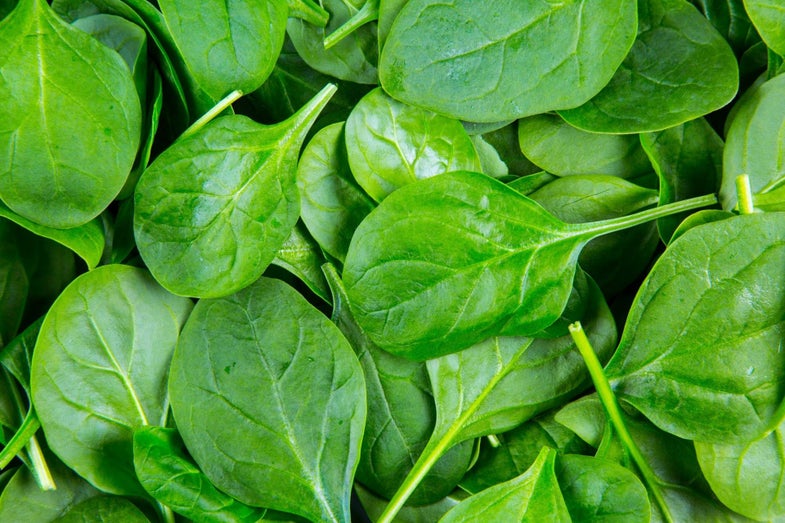 Spinach could be good for your heart in more ways than one. It’s packed with fiber, vitamin A, and the branching vasculature necessary for cells to absorb nutrients.

Which is why bioengineers at Worcester Polytechnic Institute decided to try growing human heart cells on the scaffolding of a humble spinach leaf. And it worked. They published their results online in the journal Biomaterials in advance of the May 2017 print issue.

When you look at a spinach leaf, you probably see a dark, leafy green that belongs alongside dried cranberries and apples. A bioengineer sees veins. There’s a central stem with smaller branches peeling off towards the edges, much the same way that the blood vessels in your heart grow. And though spinach doesn’t have blood, the vasculature in the leaf and in your heart are used for essentially the same purpose: delivering nutrients.

It’s easy to think of your circulatory system as mainly large veins and arteries all connecting in one big loop. But perhaps the most important part of that system are the capillaries, the minuscule tubes that get the blood to that last stage, where a lot of the oxygen and nutrient delivery actually happens. Without the capillaries, you couldn’t survive. The cells in your organs can’t survive very far from a capillary—they have to be within about 100-200 micrometers, or one or two hairs’ width. And because cells have to have this intricate web of capillaries, it’s hard to grow human tissues artificially. It’s actually one of the hardest things about manufacturing organs. Cells have ways of inducing blood vessel growth inside your body, but outside it’s not so easy. And you can’t just transplant a mass of cells into a body and expect them to create their own vasculature, because they’ll die off before they even have a chance. So if you want to create an organ from scratch (or even just a chunk of one), you have to find a way to create at least a simulacrum of blood vessels.

There are a bunch of ideas on how to do this, and spinach scaffolding is just one of them. In 2012, two researchers at the University of Pennsylvania 3D printed “blood vessels” made of sugar, then got liver cells to grow around the network. Once the cells had taken hold, they simply dissolved the sugar away, leaving behind a hollow web of tubes that could function as capillaries. That approach doesn’t have a very natural structure, though, since you’re limited by the geometric way in which 3D printers can lay down threads of sugar.

These bioengineers took a different approach. They dissolved all of the cellular material inside a spinach leaf using detergents, leaving the cellulose background behind. Once they had an empty shell of spinach, they could add in human heart cells and get them to adhere to the structure. The cells could still beat the way a heart should and the vasculature could support blood flow, though the engineers didn’t put real blood into the system—they used a red-dyed liquid meant to look like blood to prove that it worked.

Spinach leaves wouldn’t be suitable scaffolding for all tissues. The branching design is similar to how the vessels in a heart grow, but other organs have different capillary networks, so other plants might work better for different parts of the body. These bioengineers also proved their concept using parsley stems and the little hairy roots on peanuts, and they point out that in theory you could use something like wood to mimic the way bones grow, or a thick-stemmed plant like jewel weed to form a piece of an artery.

They’re not yet sure how well these bits of organ would transplant into an actual human. It’s one thing to grow a piece of a heart and another to get a body to accept that artificial structure as part of itself. Grafts fail to take hold pretty regularly, even when they’re not made from plants. And even Popeye would have trouble becoming one with a spinach leaf. At least for now.