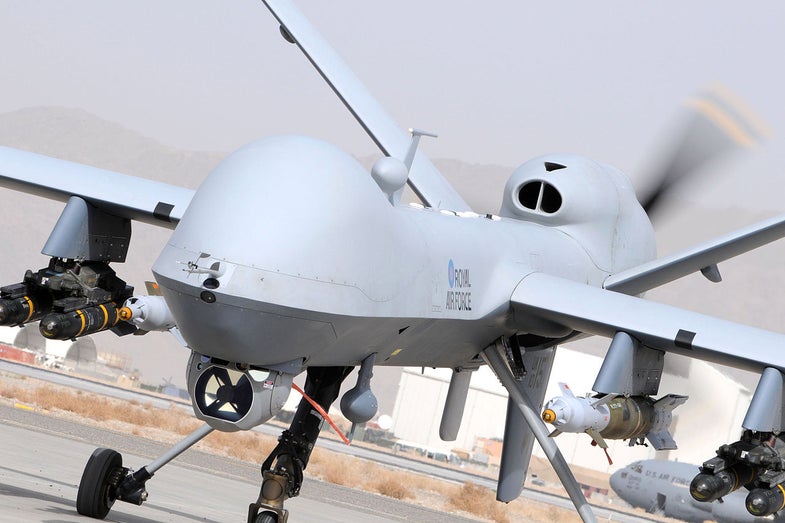 Military drones are cheap, but they could certainly stand to be a whole lot cheaper. At least, that’s the rationale behind an Air Force solicitation for a “Low Cost Attritable Strike UAS Demonstration,” posted online yesterday. To encourage the design of a cheap and deadly drone, the federal government is willing to reimburse up to $7,450,000 for developing the concept in 30 days.

As they fit into the existing military air fleet, drones like the Predator and Reaper are cheaper than, say, $100+ million F-35s, but that doesn’t mean they’re exactly ependable. Reapers cost about $13 million each. The moderately cheaper Gray Eagle, which is about a half-step between the original Predator and the Reaper, runs about $5 million per drone.

So the Air Force wants a drone that can still hit targets, but also is okay if lost in battle. In part, this is about a changing approach to war. The solicitation notes that aircraft are increasingly expensive, so the Air Force wants drones that “offer dramatic reductions in cost in order to bring ‘mass’ to the engagement, and achieve a cost imposing effect on future adversaries.” Which is to say: a good amount of drones that are cheap enough so that it finally becomes expensive to shoot them all down. The solicitation goes on to say that these drones will not be designed for the long haul. Traditionally, drones are designed like other Air Force aircraft, reliable and with a long life expectancy, but the Air Force wants to relax these requirements for a low-cost drone, to give them something useful at a much lower price point.

How much lower? While it’s hard to say what’s low cost in a service that views $100 million airplanes as essential, I wouldn’t expect a low cost drone to cost anything more than a cruise missile, which runs between $500,000 and $1 million.

We’ve seen signs of this coming. DARPA is exploring airborne aircraft carriers, where cheaper cargo planes launch wings of drones. In addition, DARPA is working on a system for drones hunting in packs, as deadly robotic teams in hostile skies. These ideas were combined in a great concept video from March, in which an expensive manned fighter scouts ahead of an airborne drone carrier. The carrier then releases drones and missiles, successfully destroying enemy air defenses. In the video, the sky is full of aircraft like it’s the Battle of Britain, but unlike in World War II, only two of the planes have humans on board. If there’s a way for the Air Force to achieve those robot-filled skies, it’ll be programs like the Low Cost Attritable UAS that do it.