All the ways we could make trains safer and smarter

Trains can be frustrating, but these technologies can cut down on delays and accidents 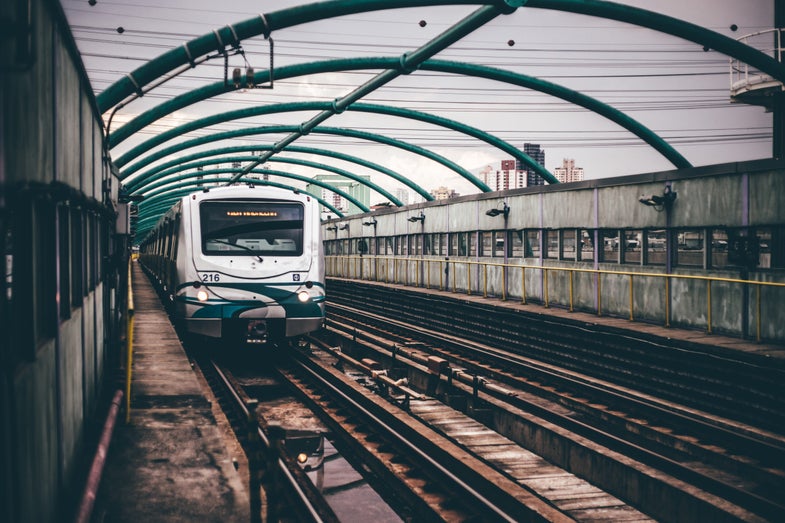 Traveling by train can be smooth and uneventful—or absolutely miserable. This spring, a series of derailments and delays caused by aging equipment at New York Penn Station snarled travel at the busiest rail hub in the North America, culminating in a plan for much-needed repairs that will disrupt commuters’ schedules for months.

We’re a long way from eliminating these kinds of train-related nuisances, and passenger rail in the United States continues to struggle with old infrastructure and poor funding. But rail is a pretty safe way to get around (more so than driving, and there are a few ways that trains and the tracks they run on can be improved. Here are five technologies we’re using to make trains faster, safer, and more efficient:

This technology can prevent accidents by stopping a train before it gets into trouble. A train equipped with positive train control uses GPS, Wi-Fi, and radio signals to find out what to expect on the track ahead, then figure out when it should start slowing down based on things like its own speed and weight.

So if a train is going too fast or the engineer fails to heed a stop signal, positive train control can put on the brakes before it derails or hits another train. But in other situations—like if a car is stuck in an upcoming rail crossing—it might not be much help. Other technologies are being devised to spot people, trees, and cars on the tracks and warn a train, says Devin Rouse, director of the Federal Railroad Administration’s Passenger Rail Division.

Positive train control was originally supposed to become widespread by the end of 2015; Congress has since pushed that deadline back to the end of 2018, although the technology has been adopted in some areas. One reason that positive train control has been difficult to roll out is that trains in the United States frequently travel on other railroads’ tracks. “They’re going to need to be able to talk together regardless of rail line,” says Jessica Kahanek, press secretary for the Association of American Railroads. “If it’s a BNSF [freight] train it’s going to need to respond in the same network as an Amtrak train would.”

However, once positive train control is installed on a train, it can be tweaked to do a few additional tricks. “The industry has invested a lot of money into this technology which basically puts this computer on board that can do a lot more than what they’re doing with it right now,” Rouse says.

Currently, most railroads and subways use fixed block signaling, where track is divided into different sections that can only be traversed by one train at a time. “That could be miles and miles…where you could only have one train in the signal block,” Rouse says.

Ideally, trains would use a moving block system, in which a safe zone is calculated around the actual train. This buffer would allow more trains to travel closer to each other, more quickly without risking collision.

With a little planning, you could use the “smarts” of PTC to help trains migrate to moving block systems. For example, you could add sensors inside the train to tell the computer its precise weight. Then there could be less guesswork involved in figuring out how long it would take to slow that train down.

When a car gets into an accident, the hood is designed to crumple up, absorbing the energy to protect passengers. It’s been harder to figure out how to design similar crumple zones for trains, Rouse says. It takes a lot of testing to make sure you’ve designed a vehicle to “fail” the way you want it to. Railcars are a lot bigger than automobiles, so sacrificing a few to smash up gets very expensive very quickly.

And because trains are so huge and heavy, if they crash there is more energy to absorb than a car would need to. “You’re talking about a whole other world in terms of what the material can actually do,” Rouse says. “It’s a much more complicated question of how is this structure going to behave? It’s not a nice little compact set of frames like a car would have.”

Only recently have we had computers that can run different crash scenarios and predict how a railcar would respond, allowing engineers to finally design crumple zones for trains. Most new trains are equipped with this safety feature, which is called crash energy management.

It’s not just human mistakes that can cause an accident, but problems with the train itself or the tracks it runs on. Fortunately, there are ways to catch these defects early on.

The Transportation Technology Center, Inc. in Pueblo, Colorado tests rail equipment to figure out how it can be improved or when it will need a tune-up. This can mean abusing wheels or railcars in the lab to see how much wear and tear they can take before they start to break down, Kahanek says. One machine shakes railcars to mimic years’ worth of vibrations from a moving train.

Other technology checks up on trains and tracks that are already in service to see how well they are aging. Wayside detectors can be installed along the tracks to scan passing trains for problems such as cracked wheels. Other engineers are working on sensors that can be tucked into trains. As the train goes about its business, these sensors check the track beneath for flaws.

One such flaw is the gaps that can form between crossties—the wooden beams that support train rails—and the crushed rocks meant to hold them in place. These voids are a bit like potholes; if left to grow, they can damage a train’s suspension, or even derail it. Researchers from Siemens and the University of Huddersfield in the United Kingdom have devised a way to look for these unwanted gaps—their sensor detects voids by reading the subtle changes in a train’s movement as it drives over them.

Normally, these kinds of problems are discovered by special vehicles that are periodically sent to scout for trouble. But the new technology is simple enough to be installed on passenger trains, so no stretch of track will escape notice for long. “Rather than one track recording vehicle going over it maybe once every few months, trains will be traveling over it with this system onboard more regularly,” says Farouk Balouchi, a research fellow at the university’s Institute of Railway Research.

This technology could be adapted for other uses—like making sure a train is giving passengers a smooth enough ride. “The vehicles are supposed to travel…with a certain ride quality, and this system can detect whether it’s underperforming,” Balouchi says.

Railroads have also started experimenting with drones. Drones can come in handy by inspecting areas that are hard for humans to reach, such as bridges. “These drones can be flying underneath without having to harness in a worker,” Kahanek says. Drones could also work in unpleasant or dangerous weather, like the wintry cold that can cause steel rails to crack.

But they can also help railroads decide how to respond in an emergency. In 2015, BNSF Railway flew drones over stretches of railroad hit by flooding in Texas and Oklahoma to zero in the damaged areas that couldn’t be reached on foot.

And when a train does crash, drones can make sure first responders know what kind of heat, chemicals, or other risks they are walking into. “They can fly these [packages] in and drop them and get sensor readings without someone having to put on the hazmat suit, walk in, drop it and then come out,” Kahanek says.

When it comes to high-speed rail, the U.S. lags far behind other countries. Amtrak’s Acela Express trains, which serve cities between Washington, D.C. and Boston, can operate at speeds of up to 150 miles per hour—but some areas of the track can only handle speeds of 25 miles per hour.

Still, there are reasons to hope for speedier transit. California plans to install a high-speed rail system that would send trains whizzing between San Francisco and Los Angeles at speeds over 200 miles per hour, although progress has been slow. Texas is eyeing high-speed rail as well. Passengers in Elon Musk’s proposed Hyperloop would travel more than 700 miles per hour. Proposals to install maglev trains in the northeast are also under consideration.

And there are other virtues besides speed. Japan is famous for its bullet trains, but they actually aren’t the only reason its prized Shinkansen train lines—which are known for their frequent and timely departures—run smoothly. “They…have a computer system that’s really the brains behind that operation, that does a lot more than we’re typically used to relying on technology to do here in the U.S.,” Rouse says. Behind the scenes, it juggles many tasks, from scheduling and dispatching trains to figuring out which crews and trains are available and rerouting trains to avoid delays.

“There’s very few if any systems I’m aware of the in the U.S. that tie all those things together in terms of…running the railroad like the Japanese systems do,” Rouse says. It would be more complicated to roll out this kind of technology for existing rail lines the United States. Like positive train control, it would have to wrangle different railroads that share the same tracks.

“It complicates matters a little, but…you could certainly figure out a way to do it,” Rouse says.