With a new racing drone model, the emphasis remains entirely on the pilot 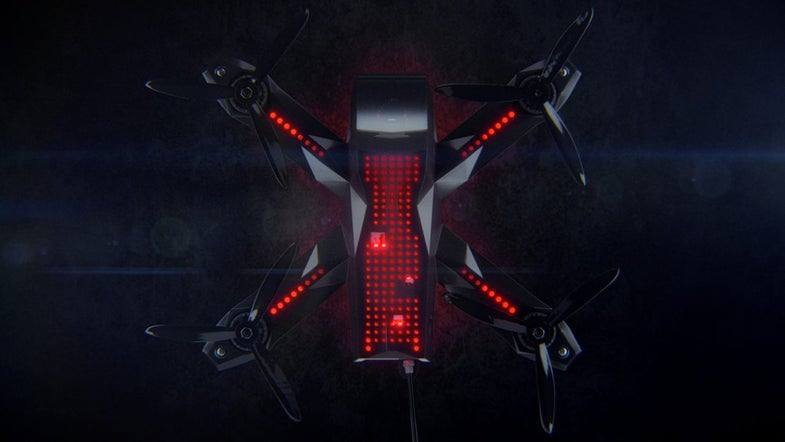 There are 210 LEDs on the body of the drone. Drone Racing League
SHARE

Neon-colored flying machines paint streaks through the air as they dodge, weave, and drop from one glowing checkpoint to the next on a complex racecourse. The pilots are comfortably detached, steering the vehicles remotely using streamed video to VR headsets. They are spared all injury except the shame of defeat that stems from a race-ending crash. For the Drone Racing League, this is the heart and the joy of an infant sport: a skill test for humans, performed by robots.

Last week, the Drone Racing League announced the latest of their drone models, the tremendously powerful Racer3. It can fly up to 85 mph, reach near top speed in just a second, and can sustain flight for three minutes, which is long enough for a lap or two around a race course. The Racer3 has twice as much thrust as the previous model, which boosts acceleration, as well as the skill level required to fly it. Besides the camera streaming a drone’s eye view to pilot, there isn’t much in the way of training wheels inherent in other unmanned craft.

“High-end camera drones kind of fly themselves. You’re telling the drone what you want it do, and it figures out how to do that,” says Ryan Gury, the Drone Racing League’s head of product. “Our drones do exactly what you tell them do to. Tell it to flip forward and it will flip end over end. That allows the pilot to fly these pretty high-speed maneuvers across three dimensions, but in exchange it makes it more difficult to fly. “

With standard drones, the Drone Racing League eliminates a confounding variable of motorsports: Is racing a vehicle a triumph of the pilot or a showcase of the engineers behind the craft?

Early air races outside the Drone Racing Leauge used a model similar to Formula One, where customized vehicles gave a chance for daring pilots to show off their skill, and an opportunity for plane designers to showcase new, speedy craft. In the DRL, however, all the equipment is exactly the same from the craft and controller to the VR equipment. It’s a leveled playing field meant to test pilot skill.

To that end, the Racer3 lacks the metaphorical stabilizing features common to high-end consumer drones. Without sensors to detect other objects around it, or even maintain a horizontal orientation in flight, the drones might risk collisions.

“We put a polycarbonate shell on it,” says Drone Racing League founder and CEO Nicholas Horbaczewski “that protects it, it’s durable, allows drones to bump each other while racing, glance off the ground and off of walls.”