Where does the poop go?: The hidden machines of cruise ships

Behind the scenes of the life aquatic 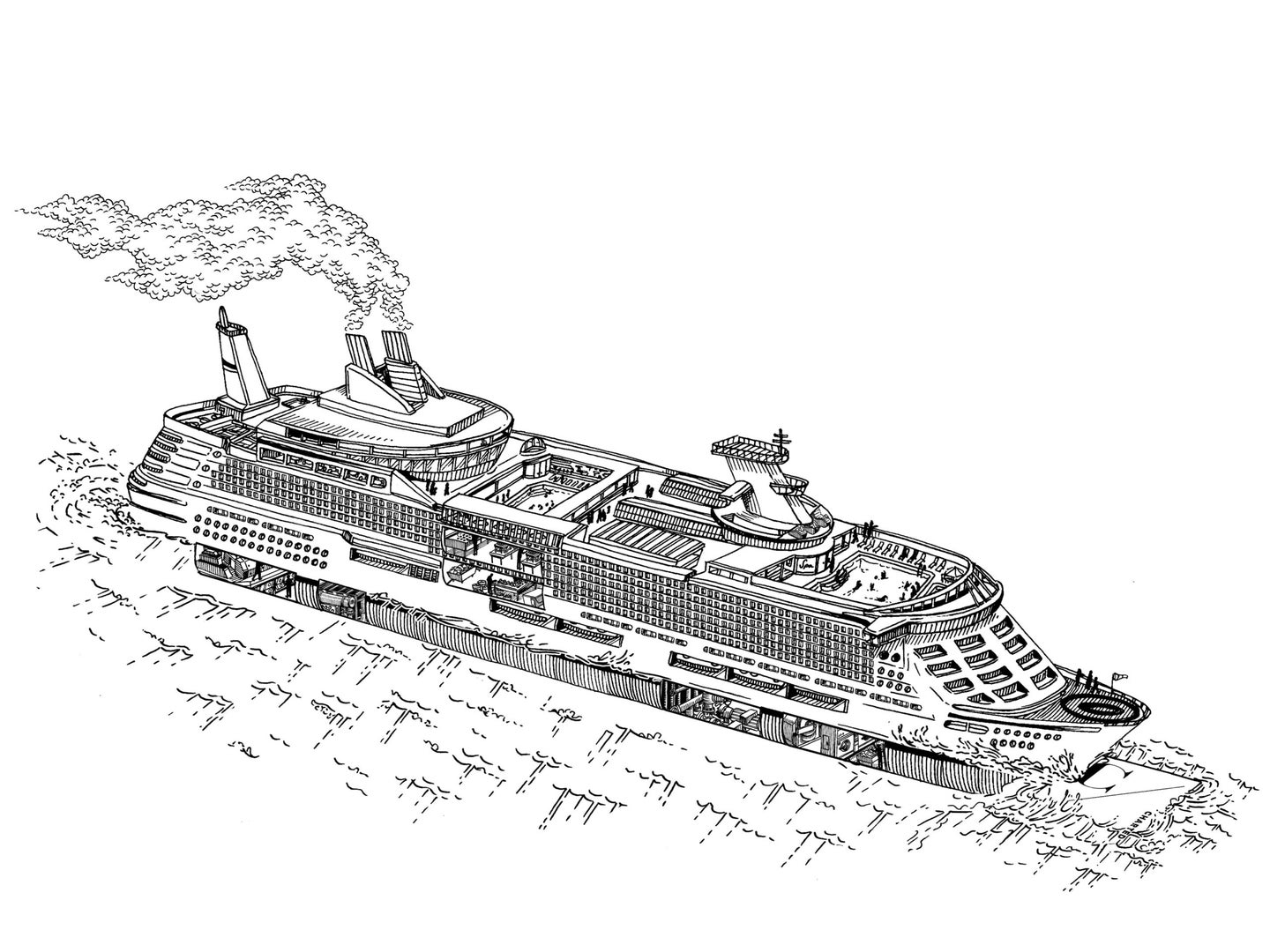 Cruise ships are entire cities set to sea—the largest ones can carry thousands of people. To function far from shore, floating burgs like these rely on washing machines that swallow hundreds of pounds of sheets, ­water-filtration systems that serve both fresh- and saltwater swimming pools, and an army of aerobic bacteria to eat tanks of poop. This is the often-hidden machinery working behind the scenes on an average mega-liner.

To clean seawater, ships often rely on two main methods. Reverse-osmosis membranes filter out salt, and evaporators use heat from the engine to boil off the fresh H2O. Once liquid goes through one of these processes, it can safely fill onboard swimming pools.

Exhaust scrubbers are the most innovative machinery on ships today. Before venting, exhaust enters a cylindrical tank. A solution of caustic soda or seawater sprays from all angles to trap toxic sulfur oxides. Then, the solution falls 150 feet into a storage tank.

A single ship can go through 23,000 pounds of flour and 42,000 pineapples (mostly for fruity cocktails) in a year. Ballroom-size freezers store ingredients until mealtime, when waiters deliver grub to 1,000-seat dining rooms via escalators.

Vacuum suction lines zip toilets’ contents to marine sanitation farms, which siphon out the water, treat it until it’s drinkable, then pump it into the ocean. Helpful aerobic bacteria digest the remaining sludge in storage tanks until it’s all offloaded ashore, about once a month.

Large-capacity washing machines—which can hold hundreds of pounds of fabric—churn away while elaborate machines iron and press. There’s even a 27-foot-wide device solely for stretching and folding sheets into crisp rectangles.

Two floors below the “hotel,” or passenger decks, sit the engines, air-conditioning compressors, and diesel-power generators, which engineers can adjust directly or remotely, from a control room. Certain ships display these controls on massive touchscreen tables.

More entertaining machines hustle on the upper decks. Cold compressed air and tiny water nozzles can fill spa rooms with snow. Some ships also have wave machines for onboard surfing or 23-foot-tall chambers that blast 100-mile-per-hour winds to simulate a skydive.

This article was originally published in the May/June 2017 issue of Popular Science, under the title “Port of sprawl.”