Remember that part of Forrest Gump where Forrest and Captain Dan are looking for shrimp but can’t find any because... 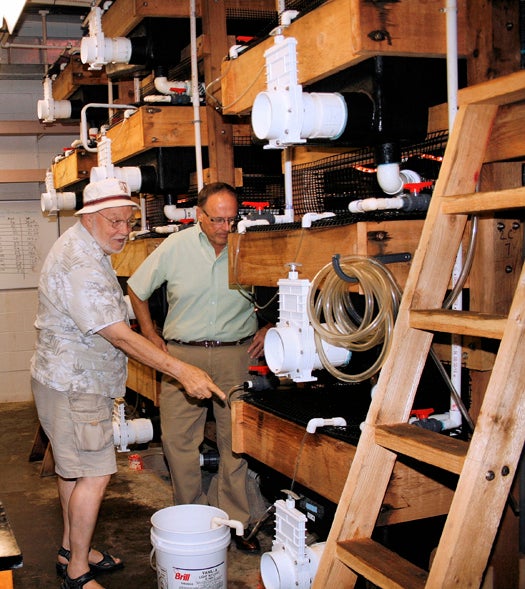 Remember that part of Forrest Gump where Forrest and Captain Dan are looking for shrimp but can’t find any because there’s too much competition for shrimp, but then the hurricane passes through and suddenly there’s no competition for shrimp and there’s just tons of shrimp to be had? This story is mostly not like that one, except it ends with a lot more shrimp than it starts with.

A new shrimp farming technology devised by researchers in Texas is churning out record-setting levels of shrimp. Called super-intensive stacked raceways, its a system of indoor aquaculture that generates far more shrimp per cubic meter of water than open pond farming or any other aquaculture technique. And it could be deployed just about anywhere.

The shrimp grow in huge enclosed tubs called raceways, stacked four high in a column. As the shrimp develop and grow under computer-controlled conditions (the water is carefully circulated but not completely renewed, keeping environmental costs and water usage in check), they are moved downward from one raceway to the next–baby shrimp go in the top and progress downward to the bottom raceway, from which they are eventually harvested.

That innovation–the ability to raise very large, protein-rich shrimp (they’re called U15, but you probably know them as “jumbo”) in very little water–means the kilo-per-cubic-meter numbers are through-the-roof: 25 kilograms of shrimp from just one cubic meter of water. For some perspective, that’s equivalent to 1 million pounds of shrimp per acre of water. U.S. shrimp farms top out at about 20,000 pounds per acre of water. The best shrimp farms in tropical climates, working year round, yield something like 60,000 pounds per acre in a good year.

So we’re talking about a vast improvement to our shrimp stores. But the impact isn’t just an abundance of jumbo shrimp to batter up and fry. For one, it provides countries like the U.S. with a means to produce fresh shrimp (we import the vast majority of ours, and it’s usually frozen and thawed a few times before it gets to us). And shrimp exporters like China are on the verge of becoming shrimp importers due to socioeconomic trends and population growth, and that would make shrimp quite expensive. With stacked raceways, we could have our own domestic supply of shrimp, circumventing the need for a series of violent “shrimp wars.”

But further, this method could provide a simple-to-produce means of protein in places where food in general and protein in particular are growing scarce. Plus: jumbo shrimp you guys! These will go great on an hors d’oeuvre table next to those popper-optimized jalapenos we’ve been cultivating.