The same techniques used by vets to speed horse rehab might work for humans, too 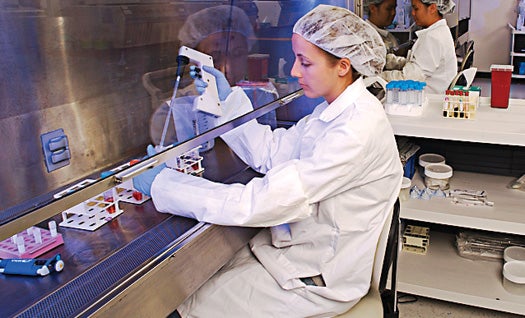 Over the course of the three races at this year’s Triple Crown, the odds are 10 to 1 that at least one horse will suffer a career-ending injury. “Orthopedically, the horse is a disaster waiting to happen,” says veterinarian Bob Harman. “They’re so big–a 1,000-pound animal on little toothpick legs–and they’re working at high capacity.” Harman is also the CEO of Vet-Stem, a California company that treats racehorses with stem-cell therapy. Since he founded Vet-Stem in 2002, his company has treated 4,141 horses for soft-tissue injuries such as tendinitis and muscle contusions, and he says 70 to 80 percent have healed completely.

Doctors generally reserve stem-cell therapy, which draws on those cells’ unique ability to regenerate and form into nearly any tissue, for patients with major medical problems, such as cancer and spinal-cord injuries. But veterinarians are “in a unique position to try stem-cell treatments for quality-of-life problems,” says Thomas Koch of the University of Guelph’s Ontario Veterinary College. Koch concedes, though, that there are many unanswered questions about veterinary stem-cell treatments, that the science isn’t fully understood, and that companies like Vet-Stem are working ahead of the evidence. “There is a demand from animal owners,” he says, because “what has been available wasn’t working very well.”

There is little doubt that stem-cell therapy could reshape orthopedics in animals and people alike. After all, Harman says, “when a Super Bowl linebacker tears a ligament, it’s the same deal as with horses.” The basic tissue structure in the legs of both species is similar, and the kind of soft-tissue injuries that Harman is studying in horses are also common in humans: About 80,000 people tear their ACL every year, and several thousand miss a few days of work a year because of tendinitis.

“Our clinical trials on horses are proof that we can move to humans.”The treatment itself is not complex. Veterinarian David Frisbie of Colorado State University has rehabilitated more than 1,500 horses’ tendon and ligament injuries with mesenchymal stem cells, which are found in the body’s connective tissues and help regenerate cartilage, tendons, muscle and bone. Some of these cells transform into new, healthy tissue, while others seem to be “acting as policemen, coordinating healing,” Frisbie says. For a study published in 2009, he took bone-marrow samples from 61 horses suffering soft-tissue injuries, extracted the stem cells, and allowed them to proliferate in the lab. He then took the concentrated cell formula and injected it into the horses’ injured tendons. Nearly two years after treatment, 85 percent of these horses, all of which had been failed by previous rehab programs, were healed.

Frisbie’s tests build on other encouraging results. In 2007, Italian researchers published a study of two groups of horses with tendinitis. Among the 11 horses that received stem-cell injections and returned to racing, nine remained injury-free a year later. Of the 15 control horses that received a more conventional course of rehab, all reinjured themselves within a year.

Veterinarian Sean Owens, director of the two-year-old Regenerative Medicine Laboratory at the University of California at Davis, is performing his own, very specific, set of stem-cell rehab trials on horses, modeled after what tests on humans might look like. “Our clinical trials are proof-of-concept that researchers working on human stem cells can cite,” Owens says, adding, “so we can move toward trials on humans.”