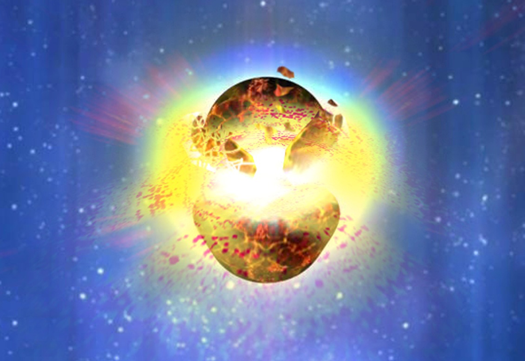 Last year, Japanese scientists found evidence that, in 775 AD, Earth was hit with a sudden blast of high-intensity radiation–a blast carrying about 10,000 times the energy of the atomic bomb dropped on Hiroshima.

Clearly, something catastrophic had occurred in Earth’s cosmic neighborhood, but whatever it was, it apparently went undetected by the 350 million people living on our planet at the time: the historical records contain no mention of strange celestial events that year, catastrophic or otherwise.

The event is recorded, instead, in the amount of radioactive carbon trapped in the annual growth rings of some of the world’s oldest trees. Carbon’s key radioactive isotope, carbon-14, forms when energetic particles enter Earth’s atmosphere and collide with nitrogen atoms. Since trees take in both carbon-14 and its stable relative, carbon-12, the relative levels of carbon-14 in their growth rings give scientists a way of measuring the amount of high-energy particles entering Earth’s atmosphere in a given year. When analyzing two ancient Japanese cedars last year, the scientists found that the amount of carbon-14 present in their 775 AD growth rings was shockingly large.

It’s normal for levels of carbon-14 to fluctuate–they rise and fall on an 11-year cycle with the waxing and waning of solar flares. But for the entire 3,000-year record, there are no other spikes as steep as the one in 775. So what could have caused the massive burst of radiation and the high influx of energetic particles that led to the elevated levels of carbon-14 in the atmosphere? At first, two possibilities seemed the most likely: The radiation either came from an especially intense solar flare or the explosion of a nearby star.

The scientists ruled out the solar flare hypothesis for two reasons. First, flares of the required magnitude would have sparked an unforgettable display of the northern lights, but, as mentioned, no such phenomenon was recorded. Second–and perhaps more importantly–such flares would also have destroyed the Earth’s ozone layer, exposing all of life to harsh radiation and probably setting in motion a mass extinction event.

On to the next possibility. A nearby supernova would have sent gamma rays flying in all directions. Those rays would have created high-energy particles in our atmosphere, which could then go on to form the carbon-14 present in such abundance in the Japanese cedars. But in order to send out enough gamma rays to do the trick, the supernova would have had to be bigger and brighter than other historical bright spots that were, in fact, documented. Yet, again, no record of a 775 supernova exists.

And, even if people had somehow missed an exploding star, that star’s remnants would still be out there today, giving out a faint glow that could be picked up by telescopes. Scientists have already identified 11 such remnants in our Galactic neighborhood, but none are the right age to have caused the 775 spike.

When they found that neither solar flares nor supernovae could explain the carbon-14 anomaly they had found, the researchers published their discovery and let the mystery stand.

But now, a group of researchers from Germany has come up with a plausible cause: a short-duration gamma ray burst, produced by the collision of two nearby neutron stars. Though immensely powerful (we’re talking two 10-mile wide boulders, each with the mass of our sun), the collision would only have been visible from Earth for about a day, which could explain why the event wasn’t recorded.

The scientists have identified five neutron stars that could have caused the massive burst, and their step is to take a detailed look at those candidates.