A survey of brown dwarfs finds they're apt to have violent weather. 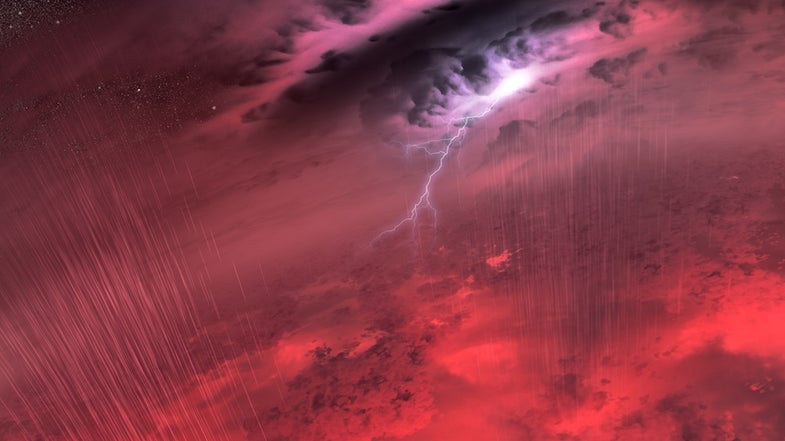 Brown dwarfs are star-like bodies that are somewhere in size between planets and stars. They start life in much the way stars do, but they never achieve the mass needed to trigger a nuclear reaction in their cores. So they burn cooler and dimmer than stars. Yet they’re still much too hot for liquid water, which explains their unpleasant-sounding rain. Astronomers are interested in studying their weather as a proxy for what the weather is like on giant gas exoplanets—distant planets like our own Jupiter.

The storms are likely similar to Jupiter’s Great Red Spot, with high winds and possibly lightning.

For this study, astronomers from the U.S. and Canada observed 44 brown dwarfs using NASA’s Spitzer Space Telescope. Spitzer detects infrared light—perfect for observing brown dwarfs, which are too cool to emit visible light. (Fun fact: When the Spitzer telescope was first proposed, scientists had only theorized brown dwarfs existed.) The astronomers in this project looked for slight variations in the brightness of the infrared light Spitzer detected, which would indicate varying cloud cover and turbulent weather.

They found half of the brown dwarfs they examined had such variation. Considering that they expected that half of the objects they observed would be oriented in such a way that their storms wouldn’t be visible or would always appear in the same position, the new Spitzer results suggest nearly all brown dwarfs are racked by storms. The storms are likely similar to Jupiter’s Great Red Spot, with high winds and possibly lightning.

The study, led by Stanimir Metchev of the University of Western Ontario in Canada, is part of the team’s “Weather on Other Worlds” project. They focus on brown dwarf weather because it’s easier to observe than planetary weather, which may be obscured by the brightness of planets’ stars.

Metchev’s team member Aren Heinze of Stony Brook University, New York, presented their work today at the annual meeting of the American Astronomical Society in Washington, D.C. You can also see their analysis of the cloud cover on just one brown dwarf, published last spring in The Astrophysical Journal.