Two stones, each a meter in diameter, suspended from cranes 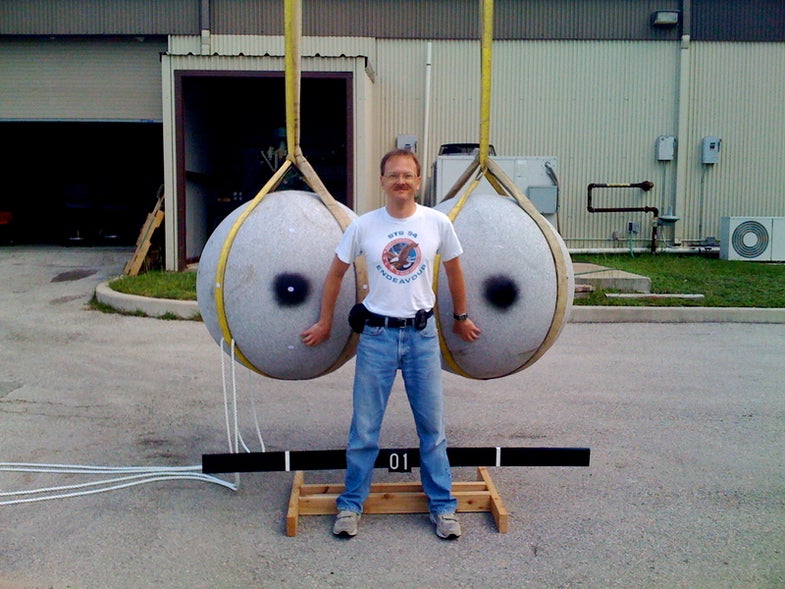 Planetary science isn’t all telescopes and spectral lines. Sometimes you need 40-foot cranes, advice from a dude named A-Ray, and a pair of 2,800-pound granite balls. Literal ones.

Dan Durda, a research scientist at Southwest Research Institute in Boulder, Colo., wanted to verify the mechanics of space-rock collisions, which can help explain the formation of asteroids and planets. Drawing inspiration from an artsy water fountain in Boulder, he ordered a pair of 3-foot-diameter granite balls and put them to the test.

When small rocks collide, they bounce off each other like billiard balls, and physicists use mathematical models to extrapolate this rebound property to larger scales, which can help them study asteroids and planet formation processes. They use the ratio of the outgoing speed to the incoming speed in a collision, known as the coefficient of restitution. This is a measure of how much energy is used up in a collision.

When it comes to boulders, you might expect the numbers to change, because some of the collision energy might be absorbed and cause fractures in the rocks. But the existence of massive rocks in landslide piles suggests that rocks are pretty tough. Durda wanted to test whether the coefficient of restitution would be the same across a wide spectrum of ball sizes, verifying current asteroid and planet models. He needed some big balls to figure it out.

“It involves the outcomes that we model when we model the destruction of asteroids, or big particles in the rings of Saturn,” Durda explained. “It was out of the box for sort of the standard research that goes on in this community. When you have to rent two 40-ton cranes to do your planetary science experiment, you’re doing something unusual.”

A new outdoor mall near Durda’s office features a water fountain with a sculpted granite sphere, and he was intrigued. He looked up the designer, waterfountains.com, and ordered a pair of 1-meter-diameter granite spheres of his own. They were quarried and milled in China, he said. 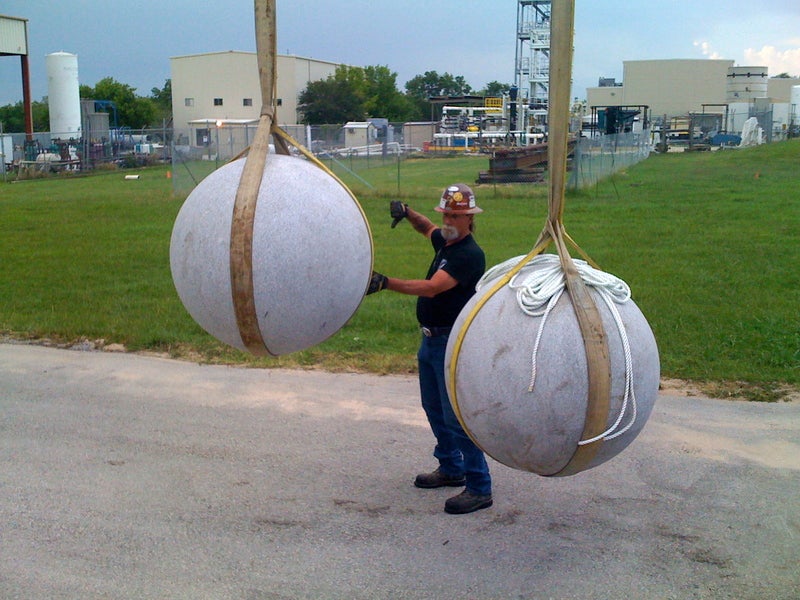 Crane operator Alan Rawlings, aka A-Ray, gives instructions as the granite spheres are readied for their collisions.

Durda’s office is in a pretty chic district of Boulder — the spa next door might object to a couple huge cranes parked outside for a week — so he took the experiment to the Southwest Research Institute’s main office in San Antonio, Texas. The two cranes he rented also came with operators Alan Rawlings (a.k.a. A-Ray) and Chris Vest, who are listed as co-authors (along with scientists Naor Movshovitz, Derek C. Richardson, Erik Asphaug and Alex Morgan) on Durda’s paper. Durda said he was impressed with their interest in his unusual experiment, and was indebted to them for their suggestions about how to secure the spheres and release them for proper clacking. A-Ray came up with the idea to use zip ties to secure the balls at a set distance, for instance, and snip them with wire cutters to release the tension.

All told, the researchers smacked the balls together 108 times at up to 3.5 mph. See them in action in the video below.

“In the speed at which we were able to safely operate the experiment, the number turns out to be very similar,” Durda said. This will help inform models of collision physics, which can help scientists learn more about asteroid impacts, space debris accretion, and more in the annals of planetary science. The findings are published in the January issue of the journal Icarus. 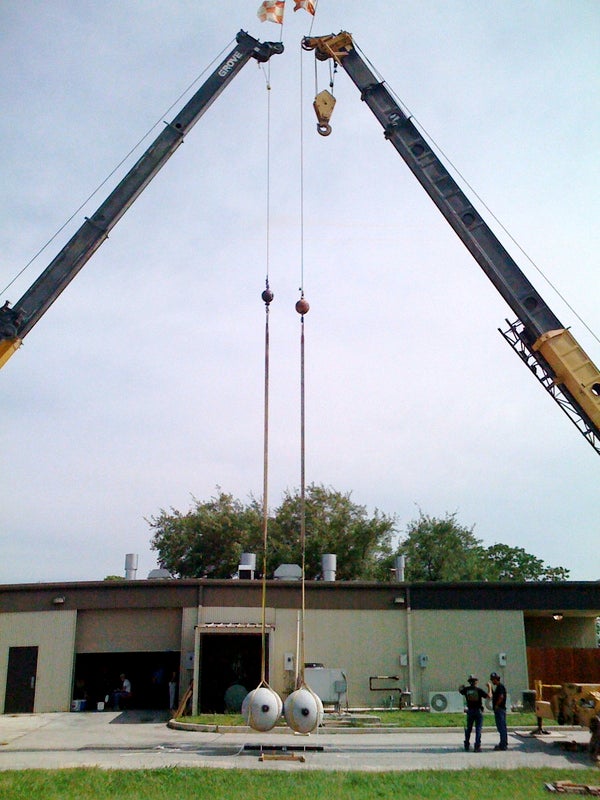 After the clacker study, Durda and colleagues ended up doing the spheres in, he said. They needed small pieces of the same granite to do follow-up studies, such as examining their composition.

“Rather than take a hammer to them, we thought we would do something more useful to planetary science, which was do a high-speed impact,” he said. “We ended up shooting them with a big cannon, and making big craters on the sides of them.”

The results of those experiments have not yet been published, but Durda said he got some surprising results.

Its job complete, now one of the Death-Star-ized spheres sits at SWRI’s San Antonio headquarters, a testament to the weird experimental evidence — and the granite balls — that scientists sometimes require.