Found: The First Ever Saturn-Like Exoplanet Surrounded by Orbital Rings

The hits just keep on coming out of Austin this week as the 219th meeting of the American Astronomical Society... 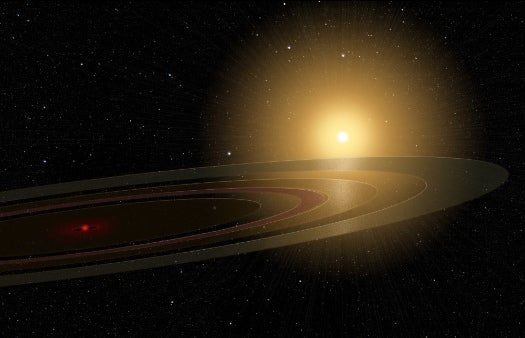 The hits just keep on coming out of Austin this week as the 219th meeting of the American Astronomical Society rolls on. Researchers there have announced the discovery of the first Saturn-like ringed object outside our solar system, documented when researchers were trying to diagnose the cause of a strange eclipsing effect emanating from a nearby star.

We’re using the term “Saturn-like” loosely here. Researchers are confident they are dealing with a ringed astronomical body, but it’s unclear right now whether it’s a planet, a brown dwarf, or even a star that they are seeing out there in Scorpius-Centaurus, the nearest region of recent large-scale star formation some 420 light-years away. But they are sure they are witnessing some strange eclipsing phenomena as they study light incoming from a nearby star.

Using the International SuperWASP (Wide Angle Search for Planets) and the All Sky Automated Survey instruments, the researchers were searching for exoplanets by analyzing the fluctuations in light coming from sun-like stars (as exoplanets and other bodies pass between us and distant stars, their brightness varies, indicating the presence of an exoplanet). While examining star 1SWASP J140747.93-394542.6 (there are a lot of stars out there) they noticed not the usual steady dimming and brightening associated with an exoplanet, but a long eclipse characterized by a lot of intermittent dimming and brightening. Where the eclipse was most significant, 95 percent of the star’s light was being blocked.

Further observation has led the researchers, from Cerro Tololo Inter-American Observatory in Chile and the University of Rochester, to determine that the eclipsing body is some kind of object with several orbiting rings of dust debris, interspersed with gaps (hence the intermittent on-and-off eclipsing). It’s the first detection of Saturn-like dust rings outside of our solar system, with the outmost ring stretches some 37 million miles outward from the orbiting body itself.