Planet Made Of Diamond May Not Be So Bling After All

Don't give up hope! It could still be diamond, but new data show that's less likely. 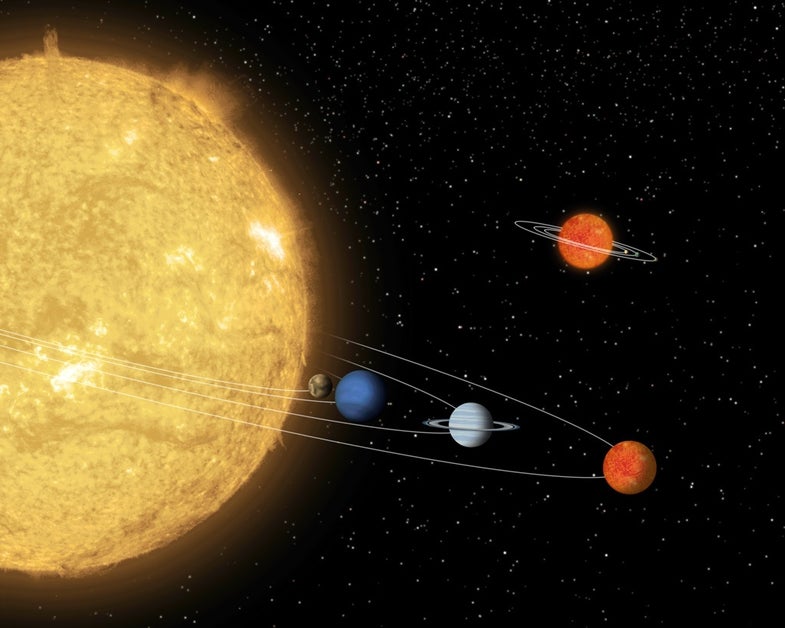 55 Cancri e, previously thought to be a diamond planet, orbits closest to 55 Cancri. Shown above 55 Cancri's planets is a nearby brown dwarf star that has its own orbiting planets. llustration: NASA/JPL-Caltech
SHARE

The first diamond planet ever found may not actually contain all that much of the precious stone. Sad!

In an analysis published last year, a team of astronomers from Yale University concluded that an exoplanet called 55 Cancri e could be composed mainly of carbon, in the form of a graphite shell over a thick layer of diamond, like so: 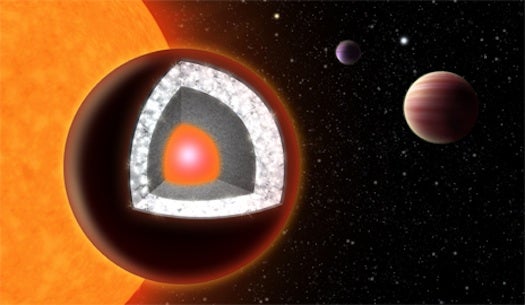 Artist’s Impression of 55 Cancri e as a Diamond Planet

This year, however, another team of U.S. astronomers is publishing a new analysis of that undermines one of the pieces of evidence supporting 55 Cancri e as a diamond planet. The Yale astronomers had thought the exoplanet, which is 40 light-years away from Earth, could be exceptionally carbon-rich because the star it orbits contains a lot of carbon. The idea is that in a solar system, the star(s) and planets all form from the same batch of materials and have similar ratios of elements.

The new analysis finds 55 Cancri e’s sun, 55 Cancri, may not have as much carbon as previously thought. Previous studies found the alien sun had more carbon than oxygen, unlike Earth’s own sun, which has about half as much carbon as oxygen. But by adding in other measures of oxygen abundance, the new team concludes the carbon-to-oxygen ratio of 55 Cancri is 0.78:1.

That doesn’t mean 55 Cancri e couldn’t be a diamond planet. The ratios of elements in an exoplanet may be different from its star’s, depending on how exactly the planet formed. “You can have pockets where there is a lot of water, meaning an enhancement of oxygen. Or places where water has frozen out, leaving behind carbon species as the dominant gas molecules,” Johanna Teske, the first author of the new 55 Cancri analysis and a doctoral student in astronomy at the University of Arizona, said in a statement. Astronomers don’t know how well 55 Cancri e matches its star.

Teske explained her team’s findings make it “less likely” that 55 Cancri e has got that layer of sparkle underneath its surface.

So what do we know for sure about the former diamond planet? It whizzes around its sun once every 18 days. Its surface is 3,000 degrees Fahrenheit. It is probably rocky, like Earth and Mars, not gassy, like Jupiter. And astronomers have pinpointed other possibilities for its composition. In the original paper that proposed 55 Cancri e may be up to one-third diamond, astronomers offered other possible compositions that match the planet’s known mass (eight times Earth’s) and radius (twice Earth’s).