They can sprout new tails in the span of a month. 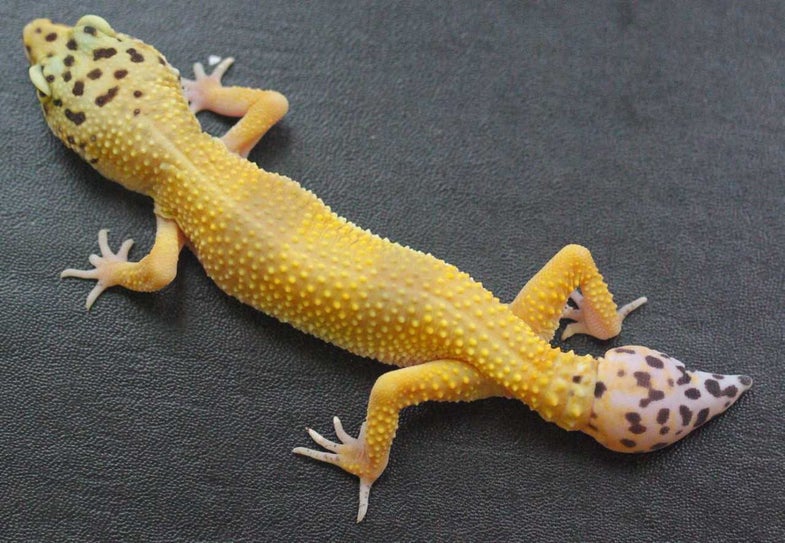 Humans tend to think of themselves as the superior species. But the way we heal our bodies is extremely basic: We can (usually) mend our bones pretty well, but if we lose a limb or damage our spinal cords we are pretty much stuck. Geckos are far superior in this arena. When they lose their tails, they just grow new ones. No big deal. Now, researchers have a better understanding of what cells make this regeneration process possible. They think this information could help us find better ways for humans to heal themselves.

Geckos aren’t alone in their ability to regenerate. Zebrafish can completely regrow lost pieces of their hearts and sections of their spinal cords, and salamanders can replace any lost limb or chunk of body organ.

“To many scientists, these are the ultimate forms of regenerating species,” says Matthew Vickaryous, a developmental biologist at the University of Guelph in Canada.

But there’s something about the leopard gecko that attracted Vickaryous. First, they house much of their spinal cords within their tails. Second, when these geckos encounters a predator, the lizards will self detach their tails without employing much effort, making them incredibly easy to study. “We can just give them a firm pinch at the tail and it basically falls off,” he says. Many other regenerative species are more reluctant to surrender their limbs, making it difficult to study their skills as smoothly.

Plus, once they’ve lost their tales, this species is able to grow them back in just about a month. That’s pretty fast, considering it takes us humans more than a decade to reach our adult height.

Based on previous research on other limb-regenerating species, scientists assumed that some types of stem cells must be involved. Stem cells are essentially blank slates that can develop into a variety of different cell types—like skin, muscle, or heart cells—depending on what’s needed.

Vickaryous’ team studied this phenomenon by literally pinching a bunch of geckos’ tails and seeing what happened on the cellular level. They found that once the tail detaches, a specific group of stem cells known as radial glia cells spring into action. They multiply and begin generating a variety of proteins that respond to the injury. In the span of a month, this process results in a completely regenerated tail. Vickaryous and his team recently published their work in the Journal of Comparative Neurology.

Most intriguing, they found, was that when the tail comes off, a blood clot quickly develops, sealing in the injury. If the team attached a piece of skin to the area as the clot was forming, the tail would fail to regenerate. They say this suggests that the open wound itself helps send out the signal that something needs replacing. If you cover that wound, those signals are halted—as is the regeneration process.

When us humans get an injury to our spinal cords, we essentially create scar tissue around it. Scar tissue is a lesser, more basic form of skin. This helps to minimize inflammation. But Vickaryous says this might prevent us from regenerating spinal cord tissue. Geckos don’t form that scar—they don’t generate inflammation like humans do—but they turn out just fine. “This absence of a scar is a big feature, we think, that permits them to regrow,” he says.

So why do we form scar tissue instead of new cells? That’s the big question. The type of stem cells responsible for the regeneration—radial glia cells—are super abundant in the brain and spinal cord when human fetuses are developing. Once we’re fully developed, however, most of these cells disappear. Vickaryous thinks that this could be a main reason we can’t regenerate our spinal cords—we are missing the cells designed to do the job.

The question that Vickaryous and other researchers want to answer is whether reintroducing these radial glia stem cells into an area of injury could prevent scar tissue from forming, thereby promoting regeneration. The idea is not so lofty. A gecko is able to continually regrow tails throughout a 10-year lifespan just by activating these stem cells. The researchers’ next goal is to figure out how the geckos regenerate other areas of their body, including brain cells, so they can better understand how these radial glia cells work in different situations.

While it’s safe to say that humans won’t be regenerating limbs any time soon, understanding the gecko’s knack for spine repair could at least get us moving in the right direction.