We spend most of the year eating really, really old apples. Why do they taste so good?

How about them apples? Them apples are older than you think. 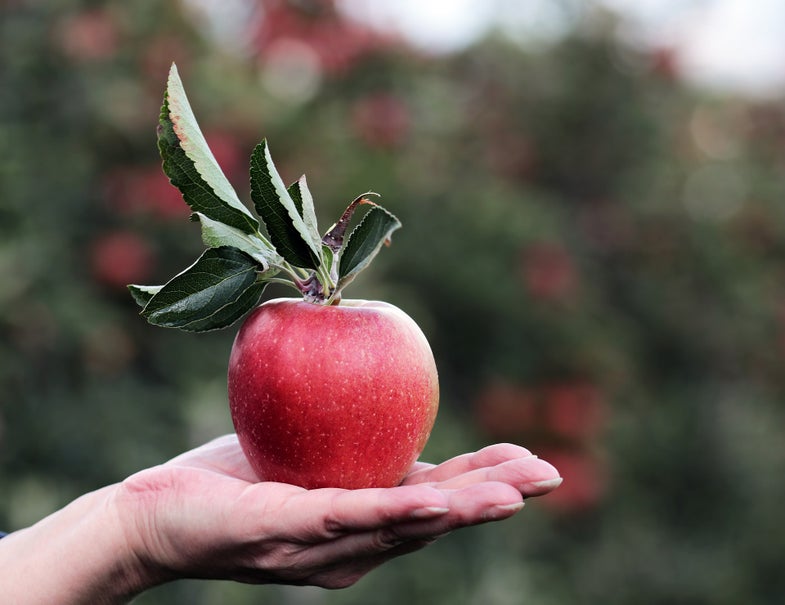 By all rights, we shouldn’t be eating apples in the dead of winter. Every bite you take from that juicy Honeycrisp is an affront to Mother Nature. We are defying her will and her seasons.

You probably don’t often consider how miraculous it is that you’re able to enjoy almost any kind of apple at any time of year, but it’s a gosh-darn scientific marvel. During the off seasons, you’re actually buying apples that are up to a year old, and you barely notice. A winter tomato is mealy and flavorless, but an apple hardly seem to lose any of its crunch in the intervening months. In the U.S., we’re mostly harvesting apples from July to October, and nearly all of it comes from the Northeast and Northwest parts of the country. Yet we can eat them year-round all across the nation. A small percentage of our apples get imported from the southern hemisphere, where they’re still growing this time of year, but for the most part we’re just eating old—yet still tasty—apples.

Step 1: Harvest once it’s mature, but before it’s really ripe

Apples will continue to ripen off the tree, but they have to get to a crucial stage first. The fruit’s taste comes from many different compounds, but the key one is sugar (yes, even in tart apples). An unripe apple is full of starch, which doesn’t taste very good. Over time, though, the apple starts to produce ethylene gas and triggers its own ripening process, whereby starch is converted into sugar. A fully ripe apple has replaced virtually all of its starch with sugar, but once that conversion is complete, the fruit also starts to go mushy. Incidentally, it’s the same with bananas. A ripened banana tastes sweeter because it’s completed its sugar conversion, whereas a green banana tastes bland and starchy. An unripe apple would be similarly bland, but no grocery store sells unripe apples.

If you’re harvesting to eat right away, you want to leave an apple on the tree as long as possible. For long-term storage, the key is to halt the process when the fruit is just about to begin converting, but hasn’t yet begun.

You can actually test for this conversion by splitting open an apple and applying iodine. The iodine will stain starch a dark blue, but won’t affect sugars, so a piece of fruit that’s dyed blue hasn’t ripened yet. Not every apple on a tree (much less in a whole orchard) will ripen at the same time, but cracking open a single fruit can give you some sense of how your harvest is coming along.

Step 2: Deprive the fruit of oxygen and warmth

Cold temperatures slow down the ripening process by slowing the chemical conversion of starch to sugar. This is why apples kept in the fridge will stay fresh for longer. Farmers can keep their fruit in plain old cold storage for a month or two, but most apple varieties won’t keep a lot longer than that. Eventually they’ll ripen up on their own, cold or not.

Modern consumers need their apples to last a long longer than that, though. We want Royal Galas in February, long after orchards are productive. Farmers meet that demand by essentially preventing the apples from breathing. Yes, apples breathe—they take in oxygen and convert it to carbon dioxide. So, to keep the fruit from aging, we can just lock them in a room and drop the oxygen level from about 21 percent to 2.5 percent or lower. That’s low enough that some workers have died because they weren’t wearing proper safety gear. Remember: if it’s oxygen-deprived enough to put an apple into a coma, it can probably put you in one, too.

Of course, other gases can still swirl around in there, and the ripening process can’t be stopped entirely. But with low oxygen and cool air, farmers can make their harvest last for months longer than it really should.

But make sure not to lower the oxygen too much. If you completely deprive them, apples start fermenting instead, and you end up with alcoholic fruit. Great for cider-making, not so great for eating.

If you really want to stop an apple from maturing, there’s always SmartFresh. That’s the brand name for 1-methylcyclopropene, which binds to an apple’s ethylene receptors, thereby preventing it from getting the signal that it’s time to ripen.

You can also use SmartFresh between the time the apples are pulled from storage and when they arrive at grocery stores. With a ton of apples in one place, the buildup of ethylene gas could cause all that fruit to ripen rapidly and ruin a harvest on the way to the store.

Once you take the fruit out of the cold and let it expose itself to ethylene, the apples start ripening again. The starches become sugars, the skin loses its bright green hue (unless it’s a Granny Smith), and the fruit develops its characteristic flavor.

The problem growers are still trying to solve is that the ripening doesn’t develop exactly the same way off the tree as it does on. A lot of the apple’s flavor will survive long-term storage, especially sweetness (that’s just dependent on sugar development). But the more rounded, complex flavors come from esters, the chemical compounds that give an apple it’s apple-y aroma. On the tree, an apple develops an array of esters. In storage, though, it doesn’t have access to all the same nutrients and gases as it does in the orchard. It can’t develop that whole array, and so doesn’t have the same full-bodied flavor.

That being said, you probably don’t notice this as much with apples as you do with something like tomatoes. A tomato doesn’t really ripen well off the vine, it’s just that growers and grocers are good at essentially faking ripeness. Most consumers judge a tomato in the store based on its redness. Application of ethylene gas will turn even the greenest tomato red, but it can’t make a tomato taste like a tomato. That’s why you should pick them based on how they smell. A vine-ripened fruit has a distinct tomato-y aroma, while an off-season one smells like almost nothing.

But we’re way better at ripening apples. A fresh apple in summer tastes great, but by the time winter rolls around, all you have to compare your apple to is other old apples—and they all taste fine, if not amazing. Really, we should just be thankful that we have apples in February at all, much less tasty ones. We’ve spent generations breeding apple varieties that stay crisp and store well, and now we’re reaping the rewards. Happy eating!