You’re more likely to be bitten by a New Yorker. 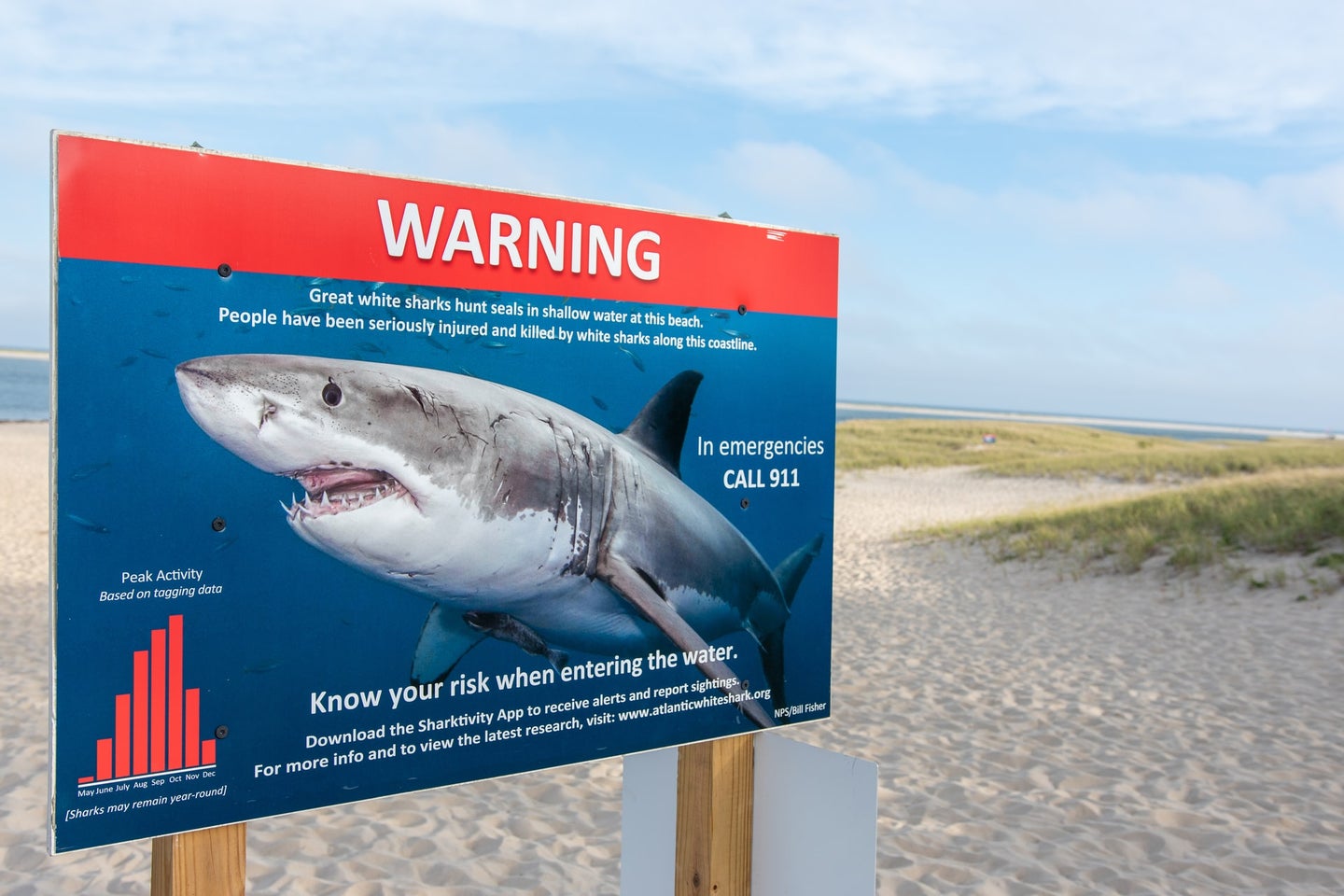 Some towns will warn beachgoers of shark activity, so check municipal websites and the local news before you plan a trip. Rusty Watson/Unsplash
SHARE

A fin cutting through the surface of the water, black eyes and white teeth gleaming beneath the surface, a sleek, smooth body gliding silently beneath the waves. It’s the stuff of beach-goers’ nightmares.

Every once in a while, a beach you want to swim at may be closed due to increased shark activity. But the truth is, encounters with these regal creatures of the deep are extremely rare—more so, in fact, than getting struck by lightning or succumbing to insect stings.

But if you spend a significant amount of time in shark territory (i.e. the ocean), it doesn’t hurt to be informed before you strap on your flippers. That way if you do spot one of the oversized fishes, you’ll know exactly what to do to limit the damage.

For starters, any type of shark encounter is rare, but fatal events especially so. Only about five people are killed by sharks worldwide every year, so there’s just a 1 in 3,700,000 chance you’ll be killed by a shark in your lifetime. That means you have a greater chance of dying due to a fall or rip currents than a shark bite.

[Related: How to avoid an alligator encounter]

“There’s a whole a list of things that are more likely to kill you than sharks,” says Kristine Stump, marine biologist and co-founder of Field Lab Consulting, which provides collaborative support services for marine research. “My favorite one is that you’re more likely to be bitten by a New Yorker than a shark.”

And Stump would know. She works day-in and -out researching, interacting with, and educating others about the creatures. And even she has only been bitten once—a minor nip when she was handling a small lemon shark years ago.

Even the risk of non-fatal bites is low: There were 57 unprovoked shark bites worldwide in 2020. The US saw the greatest number of those encounters (33) with Florida, not surprisingly due to its miles of beaches and busy migration routes, topping the list of states with reported incidents (16). The largest number of global encounters—again, not surprisingly—involved surfers (61 percent or about 34 people), followed by swimmers (26 percent or about 15 people), and finally snorkelers and scuba divers (only 4 percent or 2 people in each category).

As for which species should be treated with the most caution, great whites, striped tiger sharks, and bull sharks have logged the most unprovoked attacks on humans.

When sharks do end up biting someone, it’s not because they’re big, bad carnivores that want to snack on your flesh. “It’s mistaken identity. Absolutely no species of shark includes human in their diet,” Stump says.

Simply put, sharks mistake people for other forms of prey like fish or seals. Most encounters involve bite-and-release situations, which occur because inquisitive sharks often perform a test chomp to see if an object is palatable. (They have a high concentration of nerve receptors in their teeth.)  If not, they spit it out and move on their way. They certainly don’t want to eat you, especially since most sharks aren’t much bigger than the average person. “Animals don’t usually attack things that are the same size as them from a self-preservation standpoint,” Stump explains.

In fact, sharks prefer to keep their distance. Many swimmers, surfers and beach goers don’t even realize when they’re in the area. Stump recalls aerial videos from last year showing kayakers paddling in the ocean alongside a handful of sharks; the people make it to shore without realizing that they were a few paddle lengths away from the animals.

That’s because sharks are very perceptive. They have the same five senses as humans—up to two-thirds of the weight of their brains is dedicated to smell—plus two more: electroreception and pressure sensing. The first allows them to detect the muscle contractions of their prey and the Earth’s geomagnetic fields for navigation. The second allows them to sense pressure waves in the water when a potential meal is near.

In essence, “they know you’re there well before you do,” Stump says, and will more than likely stay away. If you do manage to actually see a shark, consider yourself lucky.

How to avoid a run-in with a shark

Even if the odds of coming in contact with a shark in the ocean are incredibly low, there are certainly ways to slim down the chances even more.

For starters, Stump suggests that you avoid swimming or diving near where people are fishing. Anglers use bait and chum, which draw large fish from the surrounding area. That, in turn, might bring in sharks that want to feed on those large fish. By the same logic, the presence of diving birds like gannets or pelicans can also indicate that sharks are nearby.

[Related: Could an ancient megashark still lurk in the deep seas?]

When swimming in open waters, always buddy up. Avoid taking dips at night, dawn, and dusk when many species are actively hunting, and avoid wearing jewelry when snorkeling, surfing, or engaging in other water sports as the reflective quality can resemble the shimmer of fish scales and other shark-prey attributes.

There’s a common rumor that period blood attracts sharks. No one has found data to support this, so don’t feel like you have to stay out of the water just because you’re wearing a tampon.

What to do during a shark encounter

In the mighty rare chance that a shark comes near enough to bite you, there are some expert-approved strategies to help you survive the ordeal.

If a shark swims too close for comfort, kick at it or hit it in the face with a stick, swim shoe, or even your fist. That’s usually enough to send the shark fleeing in the opposite direction. Once it leaves, get out of the water as soon as possible—it will be less inclined to back off during a second or third attack. Swim slowly and calmly to shore or a nearby boat, keeping your eyes on the animal if it’s still hanging around.

If a shark is acting aggressively while you’re scuba diving (rushing at you, hunching its back, lowering its side fins, swimming in a fast zig zag or up and down motion), back up against something solid like a reef or boulder to decrease the number of angles from which the animal can get to you. If that’s not an option, swim slowly to the surface back-to-back with your dive partner until you reach the boat.

If a shark bites you—it will likely be on a limb—and doesn’t let go right away, fight back by hitting and clawing at sensitive areas like its eyes and gills. If you sustain any type of wound, Stump says to treat it like any other injury: Get out of the water, focus on first aid, stop the bleeding, and go to the hospital for more serious treatment.

The bottom line is, you can’t let a fear of sharks keep you from savoring your vacation on the ocean. Swim smartly, recreate responsibly, and remember that you’re more likely to get hurt by a hotel toilet than a shark.