The right kind of chemistry can lead to some strange sorts of worlds. 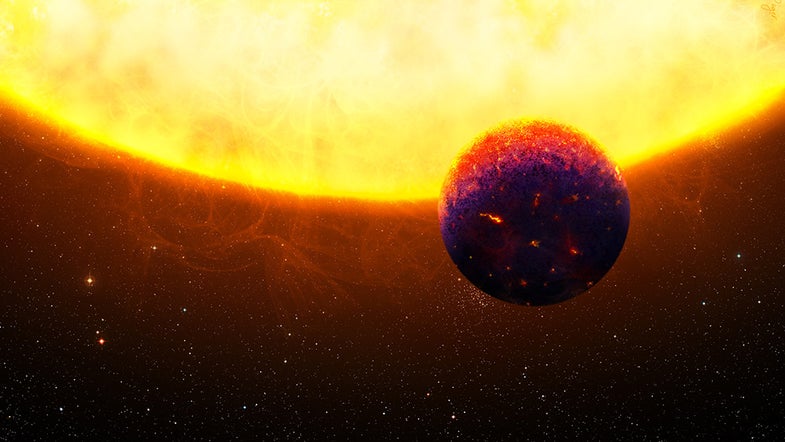 Illustration of one of the exotic super-Earth candidates, 55 Cnc e, which are rich in sapphires and rubies and might shimmer in blue and red colors. (Illustration: Thibaut Roger).
SHARE

Adorn yourself in precious gemstones, and you’re sure to attract some attention. It’s true not just for people, but for planets as well. In the latest issue of Monthly Notices of the Royal Astronomical Society, a group of European scientists discuss the discovery of a new exoplanet rich in rubies and sapphires, leading to some exciting new questions about the kind of chemistry and conditions that give rise to such an exotic class of celestial worlds.

The new investigation comes out of a larger quest to understand how planets are formed. According to Amy Bonsor, an astronomer at the University of Cambridge and a coauthor of the new paper, the goal was to “study the composition of rocky bodies outside our solar system that have been swallowed by the remnants of stars like our sun, called white dwarfs.” These sorts of studies have shown just how prevalent materials like calcium and aluminum are in rocky exoplanets, and the team wanted to know what sorts of conditions might give rise to a planet made entirely of such materials.

That quest led the team to HD219134 b: a super-Earth located 21 light-years away in the constellation Cassiopeia, with an orbit around its star that lasts just three days. It’s a rocky planet, but that’s pretty much where the similarities with our own world end. It’s about 10 to 20 percent less dense than other Earth-like counterparts, and this seems due to enhanced concentrations of calcium and aluminum, among other element species important to gemstone creation. The planet possesses the sort of high-temperature conditions that would facilitate gemstone formation, leading the researchers to believe HD219134 b is chock full of rubies and sapphires.

And it’s far from the only exoplanet of its kind. Descriptions of previously-discovered super-Earths like 55 Cancri e and WASP-47 e retain the same sort of lighter-than-expected densities that HD219134 b does. As a result of the new findings, the team hypothesizes that “a new class of rocky exoplanets exists made from large quantities of calcium and aluminum and their oxides, and these planets formed very close to their stars,” says Bonsor. 55 Cancri e, WASP-47 e, and HD219134 b are simply the first three candidates of this class.

Overall, the findings underscore the emerging understanding “that exoplanets are truly diverse and potentially very different from our own Earth,” she says. The range of what rocky exoplanets — especially super-Earths — might be made of is actually much wider than initially predicted. “How rocky planets form has a major impact on what they are made from.”

The team plans to look for more exoplanet candidates that exhibit the same sort of chemical compositions. The PLATO mission, a planned exoplanet survey spearheaded by the European Space Agency, “will be great for finding these,” she says. “There are also few systems that are starting to appear from current searches for rocky exoplanets.” The ultimate goal is to use this line of research to model how primitive collections of these materials slowly grow and evolve into entire planets.

Life as we know it would never be able to evolve or exist on these glittering globes, but it’s interesting to understand how the worlds form. “This is something we don’t truly understand even for our solar system,” says Bonsor, and that could shed light on how a planet like Earth comes into being, and whether or not our solar system may have once been capable of nursing a granular infant into a super-Earth treasure trove of precious gems. At the very least, there’s something wickedly cool about knowing there’s another planet out there shimmering brightly with red and blue rocks.