These birds have incredible hammering power but don't seem to get concussions or migraines. How? 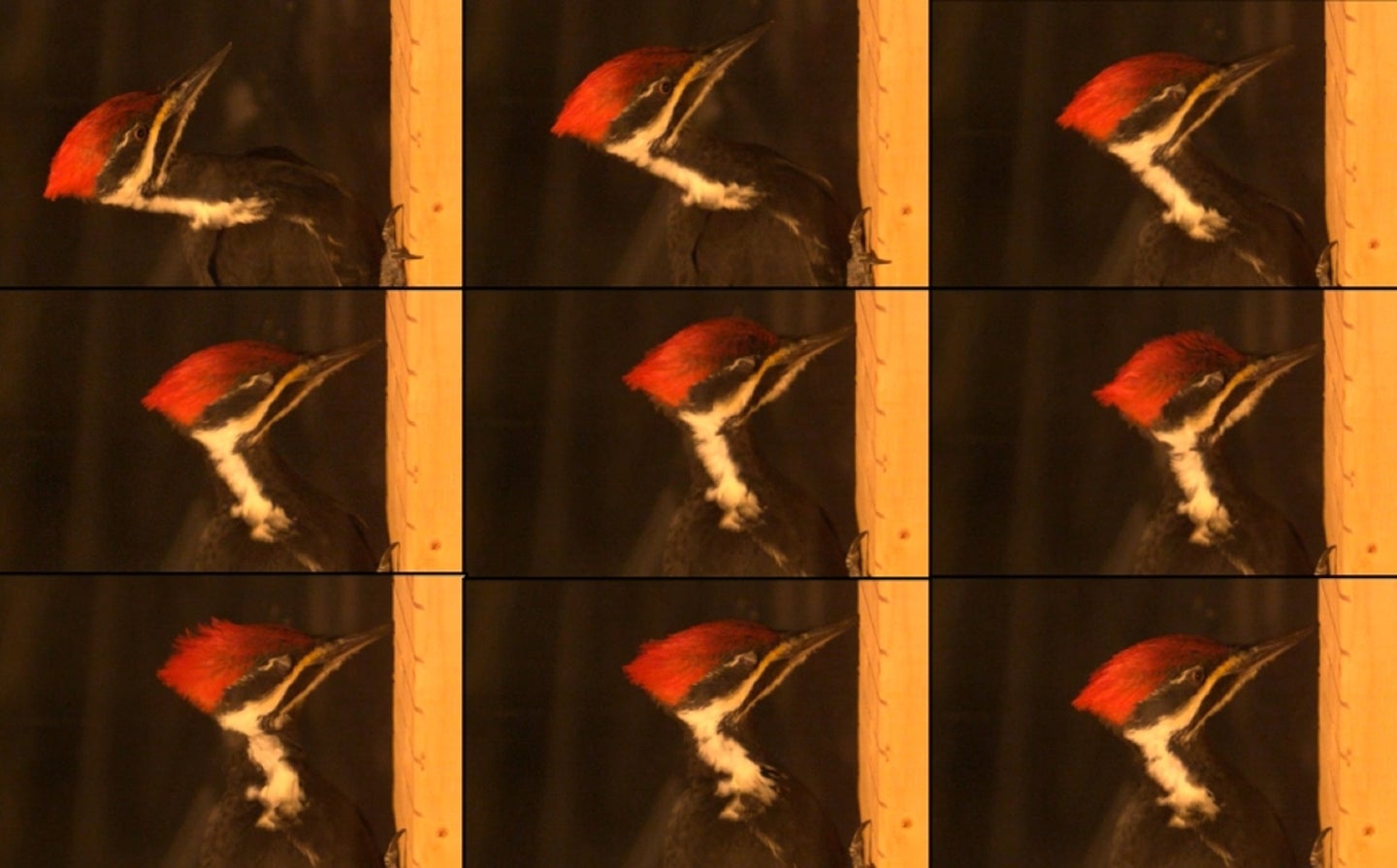 Instead of looking inside the pileated woodpecker's brain, a team of biomechanic experts measured the deceleration of its eyes, skull, and beak as it pecked. Erica Ortlieb & Robert Shadwick/University of British Columbia
SHARE

Woodpeckers lead a pretty high-impact lifestyle. When they smash their beaks against trees, they’re subjected to forces that would easily knock a person silly. Many ornithologists have assumed that the shape and composition of woodpecker skulls have evolved to dampen this shock, but a new analysis indicates that the birds don’t have—or need—this kind of protection.

Researchers filmed three species of captive woodpeckers pounding away, and found that their heads behave like “stiff hammers” to peck as efficiently as possible. If the birds had shock-absorbing skulls, the hardware would just get in the way, the team concluded. What’s more, because woodpecker brains are so small, they don’t sustain the kind of damage that a human would endure from similar impacts, the authors reported today in Current Biology.

“It seems like actually the impacts are not as severe as people had just assumed,” says Wesley Hochachka, an ecologist at the Cornell Lab of Ornithology who wasn’t involved in the research.

Woodpeckers drum into trees to find food, build nests, and communicate during the breeding season. “This is basically what the woodpeckers need to do to survive, so if they’re not sleeping and they’re not resting, they are probably pecking on something,” Hochachka says. “There’s no respite from it at all.”

When a woodpecker strikes its beak into tree bark, its head abruptly decelerates. This kind of impact can cause brain tissue at the front of the skull to compress while tissue at the back is pulled away from the braincase, says Sam Van Wassenbergh, a biomechanist at the University of Antwerp in Belgium and coauthor of the paper.

“It’s a logical thing to expect that woodpeckers are adapted to not get any headaches, or to not get a concussion during their daily activities,” he says.

Many researchers believed that woodpeckers have some kind of cushioning in their skulls that acts like an airbag or helmet. Some proposed that spongy bone between the beak and braincase, or muscles surrounding the beak, could minimize the shock from the impact.

But this idea presents a paradox. “The birds accelerate their head up to a certain speed, giving it this movement energy they want to transfer to the tree to damage or hit away parts of the bark,” Van Wassenbergh says. Yet a shock-absorbing skull would also lessen the energy that reaches the tree. “People don’t use hammers that have a shock absorber built into it; it just makes hammering quite inefficient,” Van Wassenbergh explains further.

To get to the bottom of the mystery, the researchers captured more than 100 high-speed videos of six individuals from three species pecking as fast as about 16 feet per second. The birds—black, pileated, and great spotted woodpeckers—covered a range of body sizes and geographies. The team tracked the movements of several points on the beak, eye, and skull to understand the movement of the braincase.

“If there would be any shock absorbed, either by beak movement or in this spongy bone zone, you would expect that the brain has a slower deceleration than the beak,” Van Wassenbergh says. “There was actually no difference between the beak and the brain in terms of these movement patterns, which means that [their heads] function as kind of a stiff hammer. It makes sense if you want to optimize your pecking performance.”

[Related on PopSci+: Metal music is good for you]

The researchers next used computer models to explore how a shock-absorbing zone between the beak and braincase would actually affect the birds’ pecking abilities. They calculated that such padding would significantly reduce the penetration of the beak into wood.

“With these data we show that it’s a pure waste of energy to have a shock absorber there,” Van Wassenbergh says. “You could achieve the same effect as a shock absorber by just hitting the tree less violently.”

Finally, he and his collaborators investigated what might be preventing the woodpeckers from becoming concussed. Using computer simulations of a water-filled cavity to represent avian and human brains, they found that woodpeckers aren’t subjected to as much damaging pressure as a bulkier human brain would be if it experienced the same deceleration.

“”For humans we know approximately when a concussion can be expected, and we used this as a reference to compare the pressure loading for the woodpeckers.” Van Wassenbergh says. “The [birds] still have some safety margin before they would get a concussion.” In fact, the woodpeckers would need to hit the wood twice as fast as observed, or hammer into wood four times stiffer than they typically encounter, to suffer this kind of injury.

Van Wassenbergh notes, this isn’t the first time that researchers have raised the idea that woodpeckers don’t need special protection against brain trauma but his team’s dataset offers a more detailed picture of how the industrious birds smash their heads on tree trunks without injuring themselves. The experiments also indicate that the creatures aren’t a great source of inspiration for helmets and other protective materials.

Once caveat to the study: The calculations were meant to emulate a woodpecker’s normal activities, but don’t address what might happen if the bird were to peck a metal pole or other unyielding material, Van Wassenbergh acknowledges. The researchers are now studying how beak shape optimizes pecking performance, and how woodpeckers manage to dislodge their beaks when they get stuck.

The data are “pretty convincing,” says John Bates, a curator of birds at the Field Museum of Natural History in Chicago, but don’t rule out the possibility that routine pecking could give rise to some brain damage over time. Researchers have previously reported that deceased woodpeckers had protein buildups in their skulls similar to those seen in humans with neurodegenerative diseases and chronic brain injury. It’s unclear if the proteins are actually a sign of brain damage in woodpeckers like the way they are in people, though.

Another question for future research is whether the new findings translate to other avian groups, Bates says. His team studies kingfishers, which can dive straight down into the water at speeds of up to 25 miles per hour. “Woodpeckers are definitely pretty unique,” he says, “but they’re not the only things that do some hammering.”