Ask Anything: Why Don’t Woodpeckers Get Brain Damage? 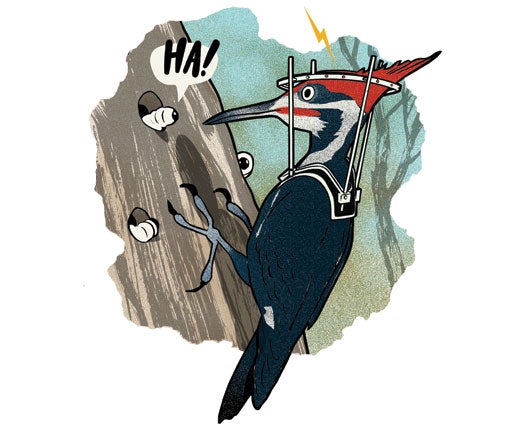 One day in 1976, psychiatrist Philip May asked his colleague at the University of California, Los Angeles a peculiar question: “Why don’t woodpeckers have headaches?” May specialized in treating schizophrenia, but proposed a radical shift: How, he wanted to know, might an animal that repeatedly slams its head into a tree trunk at 16mph keep from getting brain damage?

May started his research with a pair of pickled woodpeckers borrowed from a zoologist. In studying their cranial anatomy, he and his collaborators found a patch of spongy bone at the front of the skull, which they thought might act like a shock absorber. Woodpeckers also have a bone called the hyoid, which supports the tongue and then winds all the way around the bird’s head. A researcher later argued that the hyoid could function as a sort of cerebral safety belt.

Additionally, the UCLA team discovered that a woodpecker’s brain is packed tightly into its cranium, leaving little room for it to slosh around in cerebrospinal fluid, as a human brain can. But as with their other findings, it wasn’t clear if this feature was unique to the woodpecker, or common to many birds—including those that don’t routinely smash their beaks into wood.

To find out, in 2011, a group of Chinese researchers led by Lizhen Wang compared the head of the great spotted woodpecker to that of the similarly sized Mongolian skylark. Indeed, the woodpecker’s cranial bones looked to be stronger, its brain more snug, and its beak more elastic than the skylark’s.

But not all of May’s conjectures proved true. For example, based on high-speed films he shot in the late-1970s, May argued that the woodpecker keeps its beak perpendicular to the surface it’s striking to avoid the twisting and shearing forces thought to be responsible for concussive injuries in humans. In fact, Wang later found that a woodpecker’s peck actually has a curving trajectory.

Whatever the source of its resilience, the woodpecker brain is not immune to cerebral trauma. In 1979, shortly after May’s second published paper on the topic, a neurologist in Albuquerque wrote a letter to the Archives of Neurology. “A recent personal experience may have some relevance to these findings,” he began. “A yellow-bellied sapsucker woodpecker inadvertently flew into a closed window of my house, was rendered unconscious, had repetitive seizures, and died several hours later.” Evolution has its limits: Neither a spongy bone nor a tightly packed brain could have saved that bird.