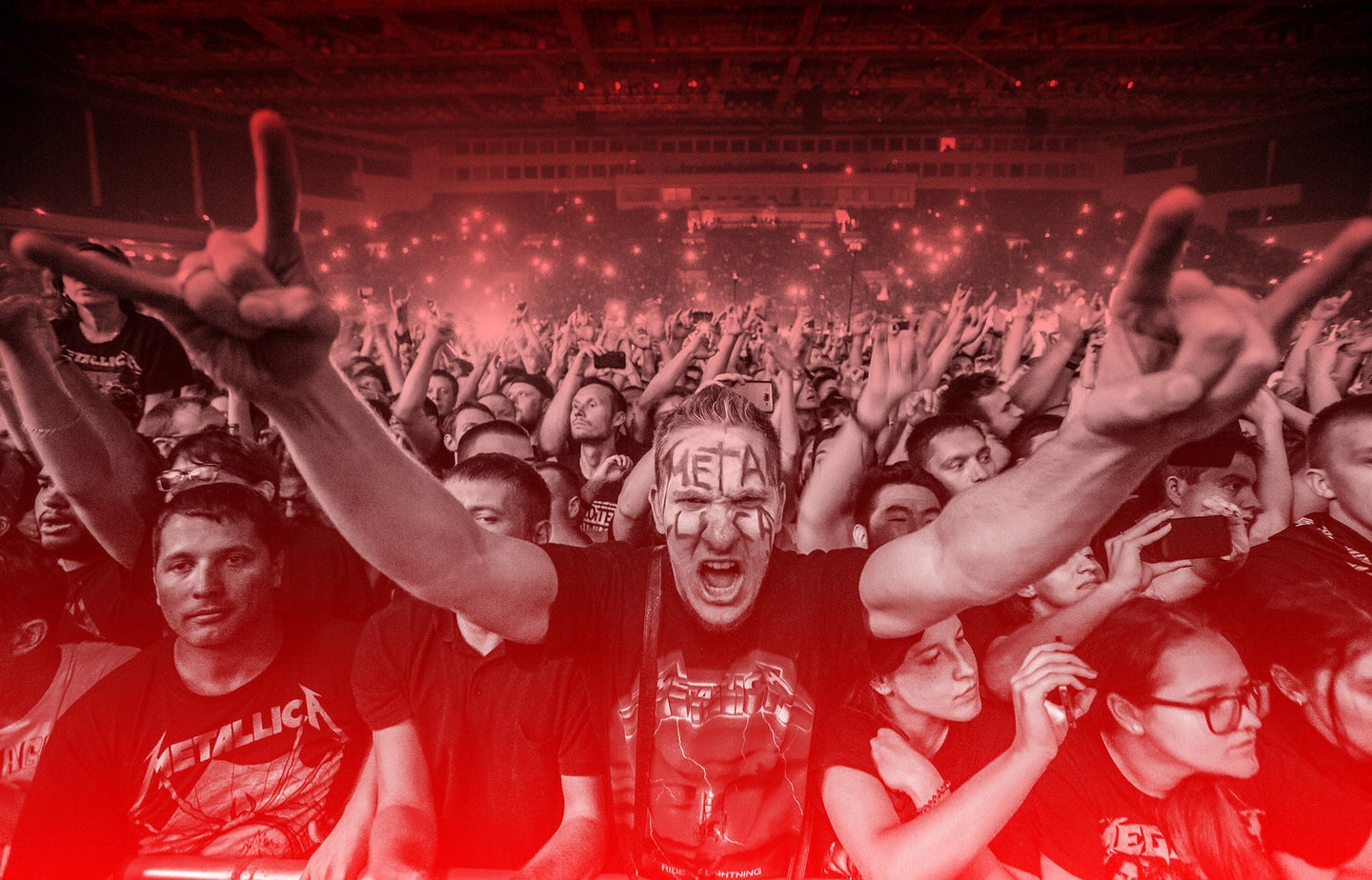 Contrary to popular belief, metalheads don’t all share one look—and they aren’t all full of rage. In fact, this genre has a lot going for it. Ruslan Shamukov/Alamy

The science is clear: Metal music is good for you

This music genre blows away stereotypes.

TO THE UNINITIATED, metal music—especially its more extreme forms like death metal and grindcore—sounds like a melody penned by an angry caveman. It’s punishing, chaotic, brutal, aggressive, cacophonous. But as with the concept of “caveman” itself, recent research has built up a much more nuanced picture of the genre. Scholars and fans alike are now exploring its role in emotional regulation—and its potential to help us survive impending doom. A bit ambitious? Perhaps. But metal has always been brash.

What makes a song metal?

Metal emerged as a genre distinct from rock in the early 1970s, as artists pushed to create heavier music. According to Zett, a formally trained musician and the guitarist in black/thrash band Kömmand, “First and foremost, metal has to have distorted guitars. It also usually has riffs—repeating cycles of musical ideas—and it’s usually ‘heavy,’ that is, loud or crunchy.”

Beyond that, what makes metal metal is difficult to answer in words. A particular mix of driving drum-and-bass rhythms, distortion, and exaggerated vocal styles—from growls to soaring falsettos—sets it apart from punk and other edgy styles. But even those qualities don’t quite get to the heart of the matter, because metal contains multitudes.

“For any kind of music that you like, there’s a metal band that you’ll probably like too,” says Kim Kelly, a journalist who spent years covering the subject for publications such as Noisey and MetalSucks. “If someone likes ethereal melodies and clean singing and emotional atmospheric vibes, there’s a metal band for that. If you’re interested in hip-hop, there’s crossovers and connective tissue there as well.”

Metalheads aren’t who you think they are

Just as the genre is more complex than you might assume, so too are its myriad fans. They’re more diverse—and less angry—than stereotypes would have you believe. For starters, they’re everywhere: A full 145 of the world’s nations had at least one active metal band in 2021.

And contrary to popular belief, fans don’t all look like burly Vikings. Laina Dawes, an ethnomusicologist and author of What Are You Doing Here? A Black Woman’s Life and Liberation in Heavy Metal, has seen as much while investigating why young Black Americans tend to gravitate toward intense music. Her interviews with artists and devotees over the last few years suggest that punk, powerviolence, grindcore, and other genres known to be explicitly political may offer a form of catharsis for youths dealing with individual and systemic oppressions.

In the ’70s through the early ’90s, rap met that need, pairing raw production with unsparing dissections of police violence and racism, poverty, and life on the economic margins. “Rap was more extreme then than it is now, and that’s where young Black people were getting their ya-yas out and being able to address that internalized anger,” she says. But Dawes’ research suggests that modern tracks, with their slick audio engineering and wider lyrical focus, don’t offer the same release. “These days heavy metal might be a better genre to get involved in,” she adds.

OK, metal is intense. But is it bad for you?

Despite growing evidence, the stereotype of brooding and violent metal fans pervades, which raises the concerns of parents and educators. Because of this, researchers across disciplines have paid plenty of attention to how this music might mold minds. They’ve looked at metalhead personality traits, questioned their propensity for self-harm and violence, and even tutted over the risks of headbanging-related brain injuries.

Metalheads do have commonalities, just not those that outsiders might think. According to a 2013 study at University of Westminster and HELP University College in Kuala Lumpur, Malaysia, they’re more likely to care about being seen as “unique” than the average person; they’re also less religious and have somewhat lower self-esteem. In 2015, Stanford and Cambridge University psychologists reported that folks with “systemizing” traits—who tend to analyze things and look for patterns—are more likely to enjoy intense music and reject mellow crooners. In 2010, psychologists at Heriot-​Watt University in Scotland found that headbangers were drawn to theatricality, a preference they shared with classical aficionados. In fact, the only thing separating the groups was age: Younger folks tend to prefer Metallica to Mozart. And research from Macquarie University in Australia published in 2018 showed that a proclivity for brutal tunes does not a serial killer make; listening does not desensitize fans to violence.

But that’s not to say that metal doesn’t affect us. A 2015 study surveyed 377 people who were metalheads in the ’80s. While they often engaged in risky “sex, drugs, and rock-and-roll” habits as youths, they were also significantly happier during that time than their peers—and better adjusted as adults. It could be that being on the cultural fringes can help one develop a strong sense of self, and perhaps even help build supportive friendships.

If you ask fans why they listen to metal, they’ll probably tell you that it makes them happy—and some research suggests that heavy tunes can even help us handle our emotions. A 2015 study from the University of Queensland, Brisbane assessed how extreme music affected anger processing. The researchers first subjected 39 metalheads to “anger induction” by strategically prompting them to recall incidents that had made them very mad, then instructed some of them to listen to metal from their own playlists. If commonly held assumptions about intense music actually causing anger were indeed correct, then study subjects would get even more riled up while listening. But that didn’t happen: Participants reported feeling positive and “inspired” during and after the metal sesh. The authors posit that intense music could provide an outlet for tough feelings rather than being their genesis.

Could metal help us save the world?

When you accept that metal builds communities (and frequently functions like a cleansing primal scream), it follows that headbanging could help us survive tough times—including, one scientist argues, the impending climate apocalypse.

Bear with us here. Maintaining mental and emotional resilience—that is, processing difficult feelings—will be key to both surviving the upheaval and building a stronger future. That’s why David Angeler, an ecologist and complex systems researcher, published a 2016 paper in SpringerPlus on metal’s potential to keep us afloat. According to Angeler, building resilient societies depends on a complex set of factors affecting both systems and individuals. Anything that helps people cope with their own emotions, including the catharsis many feel while listening to metal, also helps keep their communities strong.

But Angeler’s ideas go beyond that. What if metalheads could collaborate with the sustainability community? “We need to return to the era of Romanticism, where different fields, such as the arts and sciences, are not mutually exclusive,” he says. If you think about metal and sustainability as complex ecosystems analogous to the ones we see in nature, it’s easy to envision how the two could interact and create change at the systemic level for humans.

In some ways, this is already happening. An increasing number of bands—particularly in black metal, thrash, and grindcore—are focusing in their lyrics on topics like climate change, biodiversity loss, and environmental collapse. After all, if your brand is gloom and doom and against-the-machine raging, there are few subjects more universally troubling. As acts speak to the issues they see every day, they help inform others about their experiences and let people know they’re not alone in their anguish. Some fans might even become scientists themselves, or run for office. Sustainability specialists, in return, could listen to the challenges and concerns in the music and turn their studies to areas that address those problems. Those kinds of connections and feedback loops, says Angeler, could result in “reduced suffering, reduced costs, and more tolerance.” He adds that metal’s rich sound structures—and the extent to which they vary between subgenres—could prove ideal for creating artistic representations of complex problems. One could elicit harmonic and empowering feelings through symphonic metal, for instance, while conveying chaos with mathcore or despair in doom tracks.

Could other kinds of music also provide this benefit? Sure. But metal’s consistent willingness to address ugly truths, its penchant for transforming distress into emotional resilience, and its ability to create community all across the world make it a model for how art can continue to give us meaning and support, even when everything around us is falling apart. “Metal has never gotten the credit it deserves,” says Kelly, the music journalist. “Metal doesn’t want your approval, but f*ck you for not respecting us.”