Hummingbirds can see colors we can’t even imagine

The birds can distinguish hues in combinations of ultraviolet and visible light that puts our own technicolor vision to shame. 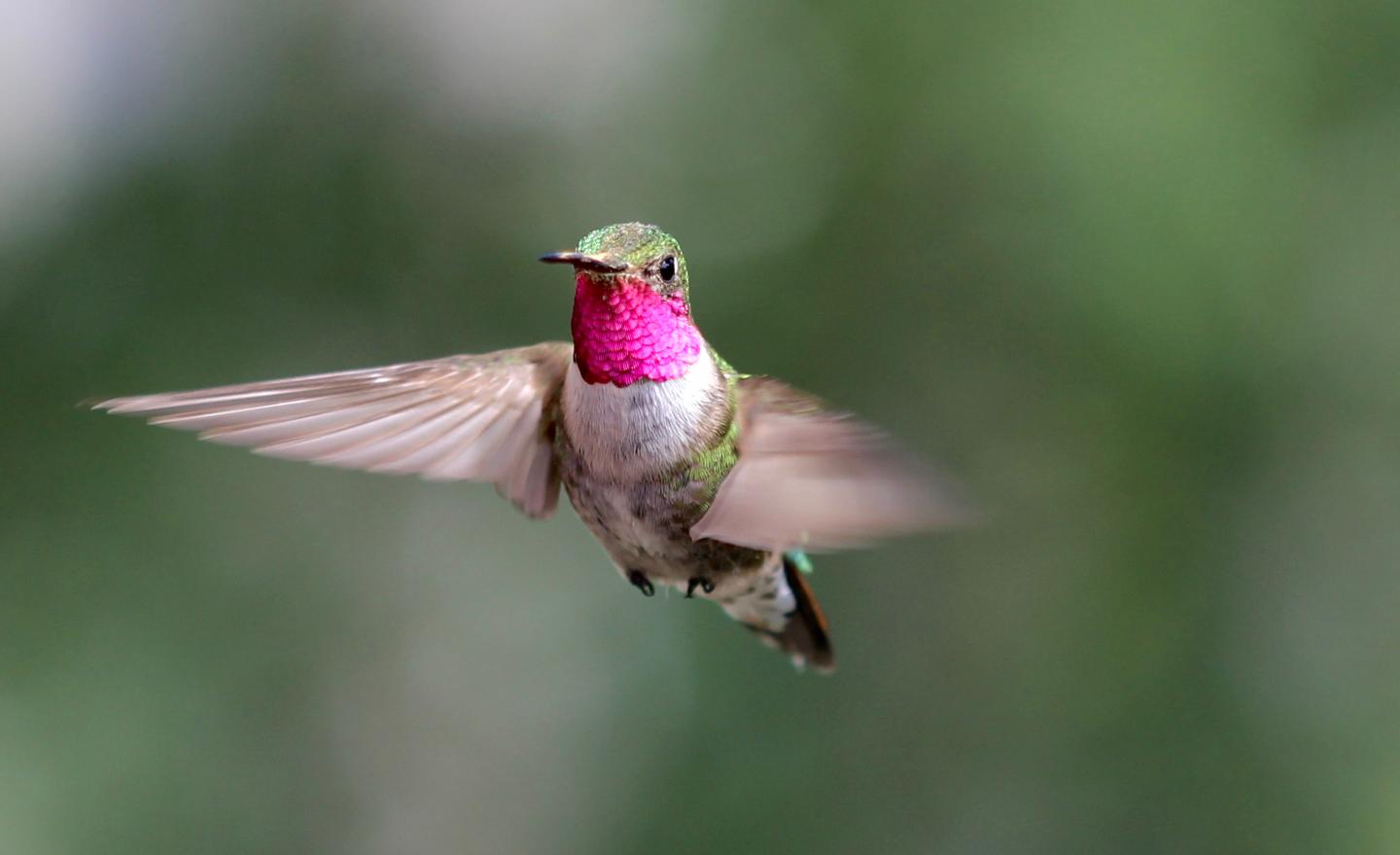 Human color vision depends on three types of cones—special cells sensitive to red, blue, or green light. However, many birds, reptiles, and fish have an additional kind of cone that can pick up ultraviolet light. Noah Whiteman
SHARE

Hummingbirds can see an impressive array of colors that are invisible—or appear very different—to the human eye, scientists reported June 15 in the journal Proceedings of the National Academy of Sciences. In a series of experiments involving sugar water and LED tubes, the researchers found that wild broad-tailed hummingbirds can discern colors created from various combinations of ultraviolet and visible light. This ability likely helps the birds home in on nectar-bearing flowers covered in patterns that are imperceptible to people.

“Our findings…suggest that these birds really are experiencing a whole range of colors we humans can only imagine,” says Mary Caswell Stoddard, an ornithologist at Princeton University and coauthor of the new study. “We humans are really limited in how we understand and appreciate and can describe the color experience of birds and other animals.”

The average human eye can distinguish around one million different colors. Our color vision depends on three types of cones—special cells sensitive to red, blue, or green light. However, many birds, reptiles, and fish have an additional kind of cone that can pick up ultraviolet light.

“If humans are looking at a rainbow, we can see ROYGBIV; a bird looking at the same rainbow would see all those colors in addition to ultraviolet,” Stoddard says. “The second advantage is that the UV cone type should in theory give birds an extra dimension for color perception relative to humans.”

Stoddard and her team wanted to explore which “nonspectral” colors hummingbirds could discern, which they define as colors that an animal sees because their eye’s cone cells react to very different parts of the color spectrum at the same time. The only one of these special colors that most humans can see is purple; the “violet” created by a prism or rainbow is technically a kind of blue.

“When we see purple, our blue cones and red cones are being stimulated, but not really our green cones,” Stoddard says.

Hummingbirds made ideal candidates for this investigation because they are sugar fiends that are naturally drawn to brightly colored flowers in search of nectar. For each experiment, the scientists set up two bird feeders—one filled with nutritious sugar water and the other plain water—at Rocky Mountain Biological Laboratory in Colorado. Beside the feeders were two LED tubes, each of which emitted light in a different color.

Stoddard and her colleagues saw that within several hours, the local hummingbirds typically learned to recognize whichever color had been paired with the sugar water and make a beeline for that feeder.

To make sure the birds weren’t simply memorizing the location of the sugary reward, the researchers periodically swapped the positions of the feeder and LED pairs. And when they repeated the experiment using two LED tubes that both emitted the same color, the birds were much less likely to select the feeder with sugar water on their first visit; this indicated that the birds weren’t using smell or some other cue to find their treat.

The researchers visited the site for three consecutive springs and performed a total of 19 experiments that forced the birds to distinguish between a variety of different pairs of colors. They found that the hummingbirds could readily perceive colors from the visible light spectrum such as red, pure ultraviolet light, and different blends of UV and visible light such as ultraviolet mixed with red. They could even tell apart two hues created from different mixtures of red and ultraviolet light.

“I was really excited to see these birds before my eyes learning to discriminate between two colors that looked identical to me,” Stoddard says. Scientists have long known that birds can see ultraviolet light. “[So] it was not a huge surprise that they can see UV-green as different from green, but it was very exciting to establish that wild birds are able to learn about different colors and reveal to us what their world looks like.”

Birds likely see a world that is bathed in many of these hues, making plumage or plants appear very different than they do to people. We can only speculate what it’s like for birds to experience this extra dimension of color perception; it may be akin to the enormous difference most humans perceive between black-and-white and color television, Stoddard says. But, intriguing as these colors might be to us, birds probably don’t attach any unique significance to them. After all, it’s normal for them.

A bird probably doesn’t care about the origin of the colors it sees, she says. Rather, “it cares what that color tells it about finding food, finding a mate, or escaping a predator.”